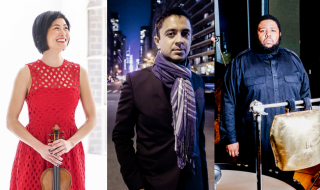 Recognized for intense, commanding performances, delivered with dazzling virtuosity and technical assurance, violinist Jennifer Koh is a forward-thinking artist dedicated to exploring a broad and eclectic repertoire, while promoting diversity and inclusivity in classical music. She has expanded the contemporary violin repertoire through a wide range of commissioning projects, and has premiered more than 70 works written especially for her. Her quest for the new and unusual, sense of endless curiosity, and ability to lead and inspire a host of multidisciplinary collaborators, truly set her apart.

Grammy-nominated composer-pianist Vijay Iyer (pronounced "VID-jay EYE-yer") was described by Pitchfork as "one of the most interesting and vital young pianists in jazz today," by the Los Angeles Weekly as "a boundless and deeply important young star," and by Minnesota Public Radio as "an American treasure." He has been voted DownBeat Magazine's Artist of the Year three times-in 2016, 2015 and 2012. Iyer was named Downbeat's 2014 Pianist of the Year, a 2013 MacArthur Fellow, and a 2012 Doris Duke Performing Artist.

Newark-born multi-instrumentalist and composer Tyshawn Sorey (b. 1980) is celebrated for his incomparable virtuosity, effortless mastery and memorization of highly complex scores, and an extraordinary ability to blend composition and improvisation in his work. He has performed nationally and internationally with his own ensembles, as well as artists such as John Zorn, Vijay Iyer, Roscoe Mitchell, Muhal Richard Abrams, Wadada Leo Smith, Marilyn Crispell, George Lewis, Claire Chase, Steve Coleman, Steve Lehman, Robyn Schulkowsky, Evan Parker, Anthony Braxton, and Myra Melford, among many others.