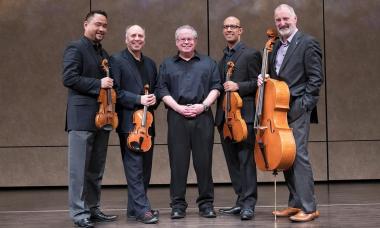 Music as a Mirror of Our World: Chamber Music at the Turn of the Twentieth Century

Join the Alexander String Quartet and Robert Greenberg for what will be their most far-ranging and adventurous series in their 30 years together, celebrating the music that mirrored the technological, philosophical, and artistic sea change in the Western world between 1889 and 1918. You'll learn while you listen to music ranging from the nineteenth century status quo to some of the most experimental compositions ever written.

The Alexander String Quartet has performed in the major music capitals of five continents, securing its standing among the world's premier ensembles, and a major artistic presence in its home base of San Francisco, serving since 1989 as Ensemble in Residence of San Francisco Performances and Directors of The Morrison Chamber Music Center Instructional Program at San Francisco State University. Widely admired for its interpretations of Beethoven, Mozart, and Shostakovich, the quartet's recordings have won international critical acclaim. They have established themselves as important advocates of new music commissioning dozens of new works from composers.

Robert Greenberg has performed, taught, and lectured extensively across North America and Europe. He has composed over fifty works for a wide variety of instrumental and vocal ensembles. Greenberg has received numerous honors, and is currently music historian-in-residence with San Francisco Performances, where he has lectured and performed since 1994. He has served on the faculties of the University of California at Berkeley, California State University East Bay, and the San Francisco Conservatory of Music.

This program centers on music from Austria, and will include: