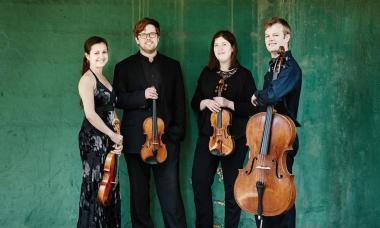 Founded scarcely a decade ago, the Castalian Quartet has captured the attention of the music world for its "powerful individuality of sound" and performances "full of joy, sorrow and poetry" (The Scotsman). The Quartet was named the 2019 Young Artist of the Year by the Royal Philharmonic Society.

The Castalian String Quartet was the recipient of the inaugural Merito String Quartet Award & Valentin Erben Prize and a Borletti-Buitoni Trust Fellowship Award in 2018.
Over the past year, the Quartet has given its debut North American recitals at The Philips Collection (Washington D.C.), Lincoln Center (N.Y.), Middlebury College (Vermont), Salle Bourgie (Montreal), Vancouver Recital Series and Banff International String Quartet Festival.
They have performed widely throughout Europe, with highlights including the Hamburg Chamber Music Series, International Musikfest Goslar, Sommerliche Musiktage Hitzacker, "Quartetaffairs" in Frankfurt (broadcast by NDR), the Queille Festival and Conques Lumiere du Roman in France. UK appearances include the Bath, Cheltenham, East Neuk, North Norfolk, Peasmarsh and Winchester Festivals. They have also been the resident ensemble at the Esbjerg International Chamber Music Festival in Denmark and Festival Musique d'Ete a Suzette, near Avignon. Further afield, they have undertaken tours of China and Colombia.
The Quartet has collaborated with with Aleksander Madzar, Alasdair Beatson, Simon Rowland-Jones, Daniel Lebhardt and Olivier Stankiewicz, among many others.
The program will include: