SF Performances Presents: At the Movies with Dr. Robert Greenberg - 3 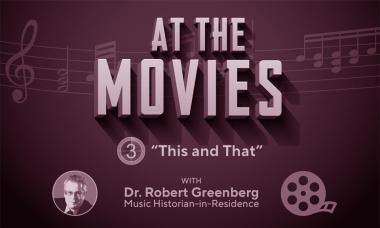 Our 2023 Salon Series explores Hollywood biopics about composers and separates fact from fiction as only Bob Greenberg can. We'll screen selected excerpts from films and Bob will share what really happened, in his singular style. Your ticket includes a complimentary glass of wine and popcorn!

Each Salon begins at 6:30pm in the Education Studio at the War Memorial Veterans Building and will run about 90 minutes.

PROGRAM: Program 3 | This and That, featuring excerpts from:

The Chronicle of Anna Magdalena Bach (1968)