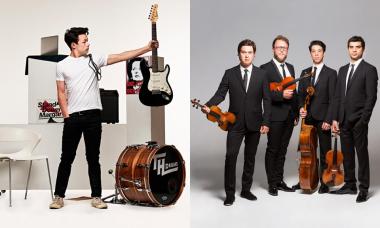 One of the most versatile guitarists performing today, Sean Shibe’s innovative approach to his instrument has enhanced his reputation for having “one of the most discriminating ears in the business” (Gramophone). He was the first guitarist ever to be selected for BBC Radio 3’s New Generation Artists scheme, to be awarded a Borletti-Buitoni Trust Fellowship, and, in 2018, to receive the Royal Philharmonic Society Award for Young Artists. Additional accolades include the Royal Over-Seas League First Prize and Gold Medal (2011), and a prize from Dewar Arts and the 2015 YCAT International Auditions.

Van Kuijk Quartet’s international accolades boast First, Best Beethoven, and Best Haydn Prizes at the 2015 Wigmore Hall International String Quartet competition; First Prize, and an Audience Award at the Trondheim International Chamber Music Competition; as well as becoming laureates of the Aix-en-Provence Festival Academy. They were BBC New Generation Artists from 2015-17, as well as ECHO Rising Stars for the 2017-18 season.