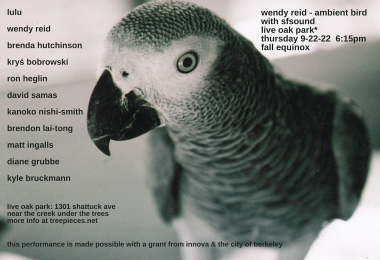 Wendy Reid’s site-specific work ‘ambient bird - live oak’ is a 44-minute interspecies sonic landscape which reflects a philosophy of connecting with all living creatures and the environment. The ensemble includes the musicians of sfSOUND and others working with the sounds of the birds, the crickets, the creek and the trees of Live Oak Park.

The structure of this work can be described as a musical process which attempts to reflect nature’s manner of operations: sonic fragments of an African grey parrot become the cells of a spatially notated score to be interpreted and performed by the musicians within the ambient environment.  Contextual in nature, the work allows performers to act according to unpredictable conditions and variables which arise within the musical continuity. In performance, an attempt is made at a spontaneous unforced growing of sound and silence in which emphasis is placed on formation rather than pre-established form, as in the building and shaping of cell-like units in living processes. (treepieces.net)

LOCATION OF PERFORMANCE: Live Oak Park 1301 Shattuck Ave. Berkeley, just north of the recreation/theatre building, near the creek, under the trees.

There is no formal seating: stand and watch or wander, sit on the grass, ground, steps, distant picnic tables or bring your own chair/blanket