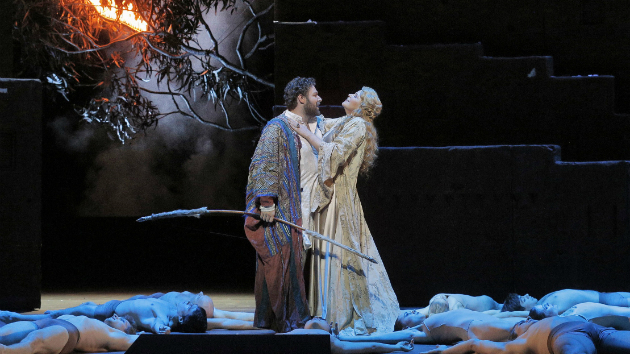 Cast changes in opera come and go, but the current situation at the San Francisco Opera's sensational, sold-out production of Les Troyens is nothing routine: It's intense, lasting, mysterious, and still unresolved.

Bryan Hymel (pronounced "Ymel"), one of the fastest-rising operatic tenors in the world, has canceled three performances as Aeneas, his starring role, in Les Troyens — and may miss the last show of this extraordinary production of the Berlioz opera on Wednesday.

But if you ask the company spokesman on Sunday evening, 72 hours before the performance in question, he has a forceful statement to the contrary:  "San Francisco Opera anticipates his return to the production for the July 1st performance." He later added:  "Having just checked again here with Artistic [management], I anticipate that Bryan will be singing Wednesday, July 1st, in Les Troyens."

That should be the end of the story, except for the fact that similar company statements for three consecutive evenings segued into sorrowful announcements from the stage that Hymel is unable to perform. The last one, on Thursday, was by S.F. Opera General Director David Gockley.

In addition, over the weekend, there have been unconfirmed reports from Santa Fe Opera, where Hymel is to sing next as the Duke in Verdi's Rigoletto in August (having canceled July appearances), that the tenor canceled the entire run there.

There was no announcement from Santa Fe and the company roster stands there, as it does in San Francisco.

Hymel's last Facebook entry is dated June 25, the night of his third cancellation in San Francisco, without any mention of them; although previously he posted enthusiastically about events here.

Hymel's appearances in the Berlioz opera resulted in international recognition, and he received rave reviews in the first two performances of Troyens here, on June 7 and 12. Lisa Hirsch's SFCV review said "[Hymel] made one of the most impressive debuts of recent years, singing with poise, heroic ring, easy control over a big, cool-toned tenor."

Lisa Houston's SFCV interview with Hymel a month ago included this quote from the tenor about the challenges in the long and exacting role:

I would say the pacing of it. When you start learning, you’re so much on the inside of it, you’re working each vowel, each phrase, each act. Now that I’ve spent so much time with it, especially in performance - I think I did eight in Amsterdam, nine in London, five at the Met; I’ve had 20 performances and when I’ve had six here it’ll be 26 - you start to see it in more the whole course of the evening. Now I know exactly how much effort I need or how much effort I’m going to use for this first part.