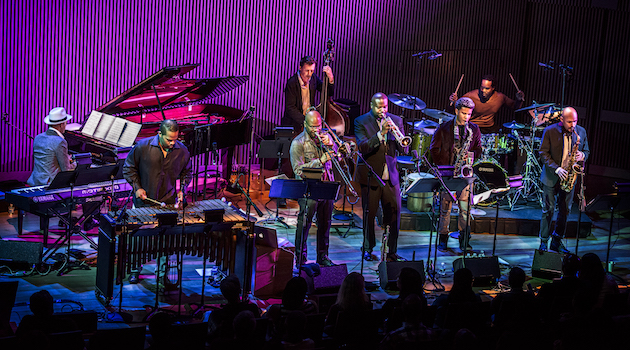 A transition was heralded on the keyboard of the long black Steinway in the Hume Concert Hall at the San Francisco Conservatory of Music, on Monday.

For an audience in evening dress and black tie, assembled for the Conservatory’s 2016 Gala, Jeremy Denk, himself all in black, presented a bright little program which flourished a finish with Donald Lambert’s stride jazz reworking of a chorus from Tannhauser.

This led the way for the SF JAZZ Collective, based at the nearby SF JAZZ Center, to take the stage as the resident ensemble and faculty for the Conservatory’s new four-year bachelor’s degree program in Roots, Jazz, and American Music. The program will be offered for the first time in the Fall 2017 semester. The Collective octet displayed its credentials convincingly with sparkling, Latinized performances of an original piece by their saxophonist, David Sánchez, and a thrilling jazz setting of a Michael Jackson song.

Randall Kline, SF JAZZ’s founder and executive/artistic director, was present for the cocktails, concert, the announcement of the partnership, and a dinner under a spacious adjoining tent. There the Collective members played again, diners danced, and the playlist catered to the evening’s honoree, trustee William K. Bowes, Jr. With dessert, Mason Bates took to the turntables as the “secret” DJ. 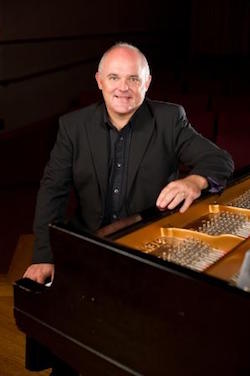 Simon Rowe was introduced as executive director of the new program, for which he’ll be leaving his long-time post as executive director of the Brubeck Institute at the University of the Pacific in Stockton. “This isn’t something David is new to doing,” Rowe said in an interview, referring to the Conservatory’s president, David Stull. “He’d worked with high-level educators in his program at Oberlin Conservatory,” including Collective trombonist Robin Eubanks.

Rowe sees the new program as without precedent, and as a deliberate departure from those conservatory approaches to jazz which have mimicked western classical training. “They’ve missed the opportunity to learn in ensemble configurations, which is where we jazz musicians learn best,” says Rowe, also a performing trumpeter. Chamber ensembles “take much more of a repertoire focus, where in jazz we’re trying to unlock the sensibilities and individuality of the young musician.”

Students will be encouraged to showcase their developing chops to the public several times a week, both on-campus and at Bay Area clubs, Rowe promises.