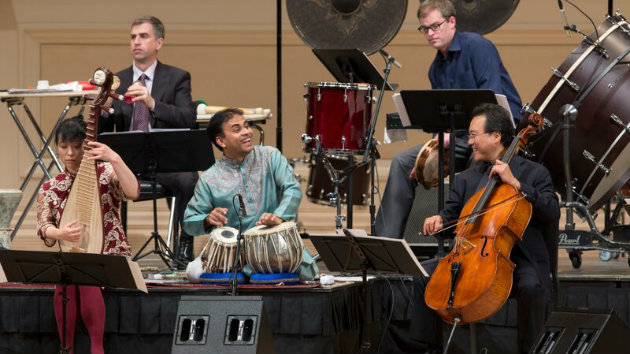 Imagine a world without borders. A landscape across which a quilt of cross-cultural influences might come alive with sound. A listener swept along by its wind encounters never-before-heard-music that seems at times familiar, but escapes human language’s definition. It might be dangerous, alienating or even terrifying. It might be glorious, perplexing, revealing. Or all of the above.

The idea — placed into the hands of Academy Award-winning documentary filmmaker Morgan Neville and resulting in the new documentary, The Music of Strangers: Yo-Yo Ma and the Silk Road Ensemble — presents potentially tantalizing results. Neville directed the Oscar-winning documentary 20 Feet From Stardom and makes films about music and culture, including three Grammy-nominated films — with theatrical release, Best of Enemies, currently receiving strong reviews. The Music of Strangers follows cellist Yo-Yo Ma and a group of instrumentalists, vocalists, composers, arrangers, visual artists, and storytellers as they create and are the lab-like Silk Road Ensemble and project.

Unless you were fortunate enough to have attended the world premiere at the Toronto Independent Film Festival on Sept. 13, patience is required. Distribution company The Orchard has purchased worldwide rights to Tremolo Production’s documentary film; with the exception of U.S. domestic television rights, which HBO has acquired from Participant Media and The Silk Road Project. The Orchard’s spring 2016 theatrical release will be followed by an HBO premiere.

Of course, the wait will be well-rewarded in that broader distribution allows people other than film festival devotees to see the documentary. Access offers intimate glimpses: Learn the way in which Ma “fell” into his profession — and how he feeds his early-prodigy’s desire for novelty by collaborating with artists worldwide. Or witness the “birth” of Silk Road at Tanglewood in 2000 and meet its ever-changing members including Wu Man, master of the Chinese pipa; Iranian exile Kayhan Kalhor, player of the bowed kamancheh; bagpiper Cristina Pato, called "the Jimi Hendrix of Galicia," and others. If the film keeps a few secrets—the inner machinations of collaborative composing, for example— it also unfurls stories that lend themselves to memory or a burning desire to purchase one or all of the ensemble’s six albums.

In a 2014 interview with this writer, Ma said a society trained according to an industrial culture that glorifies product must shift to a new register. “We need to go to [a system] emphasizing collaboration, flexibility, and imagination,” Ma said, “because innovation is the way forward. To me, that’s the direction.”

Under the direction of Neville, perhaps we’ll view the documentary and believe that we can gaze and listen along with Silk Road into the future — but we’ll have to wait. In the meantime, follow Silk Road Project and its artistic, cultural and educational programs at http://www.silkroadproject.org.