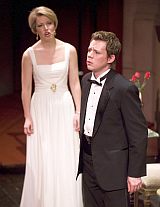 Although Friday was July 10, the evening presented a Lucky 13 at Herbst Theatre as exactly one-third of the San Francisco Opera Merola Program's 39 participants made their debut here.

It was an eventful, varied, and happy concert — even as it ended with Lori Guilbeau's Mimi dying sadly, magnificently. The program — and the young singers — ran the gamut from Wagner's The Flying Dutchman, to Gluck's Orfeo and Euridice, to Menotti's The Medium, to Rossini's The Italian Girl in Algiers, to Puccini's La bohème.

As if embodying the evening's fascinating multitasking, Susannah Biller, a willowy soprano of striking stage presence, transformed from one of the girls in the Dutchman spinning room (of three, plus countertenor Ryan Belongie — a quartet that sounded like an entire chorus), to an affecting Euridice, to an audacious Monica, to a comic Elvira, to an attention-commanding 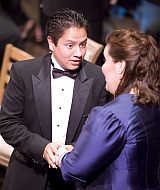 Some 50 members of the SFO Orchestra were squeezed — improbably — onto Herbst's tiny stage, with space left for the singers on a narrow downstage strip. Laura Albers, shining in violin solos, was concertmaster of the mostly summer-replacement group. Mark Morash conducted con brio, whipping the orchestra to excellence — especially in the Rossini — that was on par with the work of the full, regular orchestra. 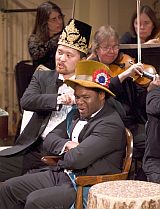 First among equals, the L'Italiana excerpt was a gem, led by Margaret Gawrysiak's Isabella, in a fully realized Rossini performance from a young, immensely talented singer. She was in great company: Eleazar Rodriguez's Lindoro sparkled with its superb lyric-tenor quality; Yohan Yi's Mustafa and Michael Sumuel's Taddeo both shook the rafters, and Biller's Elvira was a comic delight. All this, and a true ensemble sound from singers and orchestra.

It's a great experience to hear such promising or already accomplished new voices, and to listen for the first time to singers, without knowing what to expect. Strange things happen on such an occasion. For instance, near the end of almost a half hour of mighty impressive performances in Dutchman, after Kate Crist's clarion aria as Senta and before the duet with 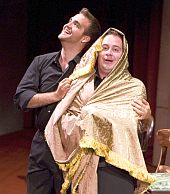 Gregory Carroll's heldentenor (rather than comprimario) Erik, there was just a line from the Mary leading the girls (and Belongie) off stage, and that sound pushed me right back into the seat, ears and eyebrows raised high.

The contralto with that amazing power was Suzanne Hendrix, who returned as Baba in the Medium and sang well, but not matching the impact of a "throwaway line" in the Wagner. There are great roles for Hendrix out there, and you will see the name in headlines to come.

After his appearance as one of the spinning room girls, Belongie sang a gorgeous Orfeo, and he was a good sport to follow up as the mute Toby in The Medium. In the Bohème Act 4, the young-and-handsome men's quartet consisted of Brian Jagde (Rodolfo), Evan Boyer (Colline 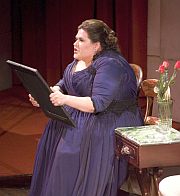 There are five more opportunities to hear these singers and the rest of the Class of 2009:

On Aug. 22, the Merola Grand Finale closes the program at the War Memorial Opera House, beginning at 7:30 p.m., featuring the singers in an evening-long program of arias, duets, and ensembles from operas.