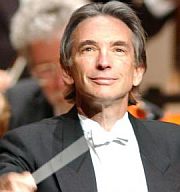 Friday's episode of the San Francisco Symphony's Franz Schubert/Alban Berg festival showed that Music Director Michael Tilson Thomas' abundant love for the two Viennese composers' music, despite commentators' attempts to argue the contrary, was the strongest element they had in common. The two works performed — Schubert's "Great" C Major Symphony and Berg's Chamber Concerto — were like apples and York flanges, they were so far apart. But MTT's extravagant conducting of the Schubert and the committed performances in the Berg of pianist Yefim Bronfman, violinist Julia Fischer, and 13 members of the orchestra winds made any doubts about the festival's raison d'être superfluous. This was simply music-making at its finest.

It would have been most instructive, historically speaking (see below), to have performed the pieces in chronological order. Did MTT fear that a Schubert opener would provide an opportunity for an unseemly thinning of the audience prior to the atonal Berg?

"Inside Music" maven Susan Key did not exactly encourage the large crowd attending the preconcert lecture with her advice on the Berg: "If you're feeling lost in the middle of the piece, listen for tiny fragments … get out your magnifying glass." But in the event, the Chamber Concerto was very well received, not only due to the mastery of the work's difficulties by all concerned, but because some of its buried charms were made evident. 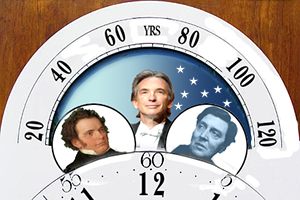 Far too often, conductors take Robert Schumann's observation that the "Great" C Major Symphony is of "heavenly" length too much to heart, and take such a leisurely stroll through its repetitive wonders that the result is more of a purgatory than a bliss. Not so with Tilson Thomas. His was a taut, energetic, very busybodied performance. I became fascinated with the variety of his conducting moves in the first movement, all of which contributed to the excitement of the reading. At one moment or another he was pouncing like a puma, or poised on one foot like the Louvre statue of Mercury, or pirouetting on his heels like Charlie Chaplin, or pretending to throw stardust at the orchestra with his fingers, or crouching with his knee just above the ground like he was about to run a 100-yard dash.

Furthermore, MTT came up with a solution to my least favorite part of the symphony, a weird two-chord progression (it makes its first appearance at letter E in the score) that Schubert inflicts 18 times over the course of the first movement. What I'll be perennially grateful for is the way he cut down the fortissimo of the second chord from three beats to one, at once livening it and lessening the pain. Tricks like this (plus robust tempos, plus superb opening horns) made for a well-nigh-perfect rendition. Only in the last movement, perhaps the least inspired of the four, was there a slight slackening off. MTT appeared a bit worn out from his earlier exertions.

Because of the order of the program, listeners had to consider in reverse how music in Vienna had changed in a century from the 1825 Schubert to the 1925 Berg, but doing so provided food for thought. The largest revelation of the juxtaposition for me was of the influence of the Strausses that emerged after Schubert's death — the faster, more lilting waltz rhythms that peaked in time and again in the Berg, while sounding more pedestrian in the Schubert. Also apparent was the concision and multiplicity of simultaneous ideas injected into the later composition.

Third, and least attractive, was the drop-off in melodic quality caused by Berg's reliance on "artificial" melodies derived from trying to spell composers' names in notes. Following them through the musical discourse was interesting when they could be heard, but let's face it: Schubert was a supreme melodist, and most modernists and protomodernists pale by comparison.