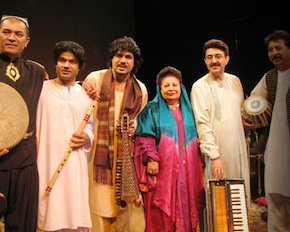 For a country in which the U.S. has spent over $500 billion waging war, for over a decade, Afghanistan’s people and culture are little known by Americans. But then, how much did we ever know about Iraq?

So you probably didn’t know that Ustad Farida Mahwash, arguably the world’s most famous singer of Afghani music, is living and working in nearby Fremont, and that that East Bay city is now home to tens of thousands of her countrymen, to whom she is a precious connection to musical memories of their troubled homeland. Recordings of this music are few and hard to find. But, thanks to Cal Performances, you’ll be able to witness Mahwash’s powerful and affecting performance for yourself on June 2, accompanied by the virtuosic Sakhi Ensemble at the Craneway Pavilion in Richmond.

The intervention of the Soviets in 1979 launched a diaspora from Afghanistan to neighboring Pakistan and Iran and then on to the U.S. But why to Fremont in particular? “Because it’s beautiful, and has nice weather, and all our families can be together,” testifies harmonium player Khalil Ragheb, seated with Mahwash and the rest of the ensemble in a studio just off Fremont Boulevard. “This is the Golden State!.” Over the three decades that saw their homeland abandoned by the Russians, dominated by the hard-line Taliban, and then invaded by the U.S. and its allies after 9/11, expatriate Afghanis established numerous mosques and restaurants in Fremont, as well as community organizations, for which Mahwash has been a major fund-raiser.

Mahwash was born in 1947 and raised in a conservative Muslim family. Her mother taught Quaran, but Mahwash, speaking in Farsi and Pashto (with Ragheb providing most of the translation), notes that females were discouraged from public performance. “Somebody in my family gave me poison, and I was pregnant,” she recounts. “But, God help me, I came back.” And while she was working at Radio Afghanistan in the capital city of Kabul, her singing talent was discovered by the station’s director, and she was encouraged to develop it. She followed the nonmessianic Sufi sect of Islam, for which art, poetry, and music are mediums of devotion.

Mahwash started studying with Ustad Mohammad Hashem Cheshti, in Kucheh Kharabat, the historical musicians’ quarter of Kabul. Her study proceeded along the lines of North Indian classical music, with much of the instrumentation and raga forms similar to those in India. But the members of the ensemble insist that Afghani music came first.

Based in the Classic Style

When Mahwash married Gulan Farouq Naqshbandi in 1968, she began her professional career, and her former teacher became her chief songwriter. Mahwash’s repertoire included klasik music, which, as the name suggests, reflected her North Indian classical training, but with more emphasis on rhythmic variation. (Her 2007 recording in this style of Ghazals, sacred and secular love songs, is available through Harmonia Mundi.) But her national and eventual international fame came in a looser, more popular form developed around and widely broadcast by Radio Afghanistan.

In the Fremont studio, Mahwash shares a short selection from one of her biggest hits, O Bacheh (Oh boy). Pretty and upbeat, graced by little ululations and other ornamentations, the song switches from minor to major mode and from 6/8 to 7/8 time. “The reason this song was popular, both on radio and TV, was that it has more than 20 different parts,” extending to nine minutes, explains Homayoun Sakhi. “And each part belongs to one of the states of Afghanistan. Every state has a different raga.”

Mahwash was given the honorary title of “Ustad,” or master, an honor previously bestowed almost exclusively on men.

“And there are special styles of music, the rhythm, the beat,” adds Ragheb. “It’s like country, jazz, and blues. Different, you know?” What remains constant is Mahwash’s dusky, alluring voice, compelling even if you know none of the several regional languages and dialects in which she performs this number.

Before leaving Afghanistan, Mahwash was given the honorary title of “Ustad,” or master, an honor previously bestowed almost exclusively on men. Ragheb has worked with her for 20 years; the other members of the Sakhi Ensemble, though younger, have proven experience on their instruments. Homayoun Sakhi, the group's artistic director, has performed and recorded with Dawn Upshaw and with the Kronos Quartet, and will join Kronos in welcoming the Olympic Games to London this summer. He's partnered in the Sakhi Ensemble by his brother Parviz, who plays the tula, an end-blown flute. “Since we were born, music has been in our blood,” says Parviz, “and our father still is a music master.” Zmarai Aref plays an Afghan version of the Indian tabla drum, and Abbos Kosimov performs on doyra, a frame drum with jangles. The ensemble will release a new recording before the end of this year.

Mahwash becomes tearful when she talks about the treatment of women in current-day Afghanistan, though she still misses her country, and continues to celebrate her best memories in her music. It’s also vital to her to share these memories with non-Afghanis. “I’ve been on five continents to introduce the music of my people,” she says, “and I’m ready to go, even if I don’t get any income.” Recently she’s also getting more exposure via Afghani and satellite TV, as well as on the Internet. “I don’t go a lot on the Internet,” she admits, “but my children tell me people give a lot of good comments on Facebook.”