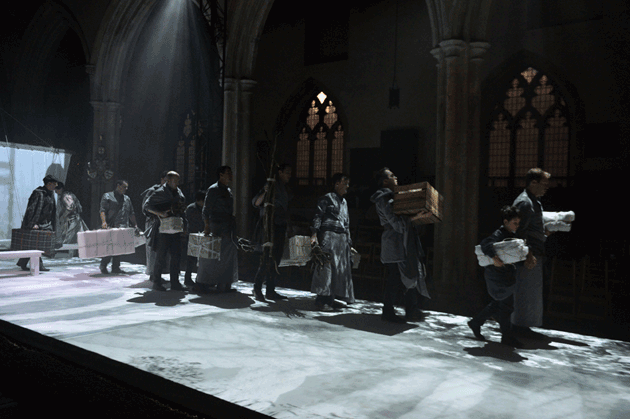 Curlew River, which arrives at Zellerbach Hall next weekend, is a story of seeking and redemption, set to the music of Benjamin Britten. The joint production by Cal Performances, the Barbican Centre, Lincoln Center, and Carolina Performing Arts is also a story of fulfillment for visionary British director Netia Jones, who was approached by the consortium of producers last year.

“Sometimes you have to go away and study the piece for a while, and come back with an answer,” says Jones, speaking from temporary quarters in the basement of Synod House at the Cathedral Church of St. John the Divine, in New York City. “It took me approximately nought-point-four seconds to come up with an answer on this, because it’s a piece so close to my heart.”

The director, whose given name is pronounced ‘Nee-sha’, first encountered Britten, and opera, in the audience for a performance of Peter Grimes in London, when she was a child. “It was one of those wonderful school matinees, which I think are fantastic,” she recalls, “because many of the children may or may not be moved, but every now and then there’s one whose life totally changes. And I was one of those.”

Launching a career that brought her skills as a designer and video artist to bear on opera and staged concerts, Jones was brought in to stage a production of Britten songs written to the words of W.H. Auden, at England’s annual Aldeburgh Festival, in Suffolk. “It was very experiential, there were projections and site-specific elements,” she reports. There was talk of her staging Curlew River at Aldeburgh alongside the other two “church parables” composed by Britten a half-century ago: The Burning Fiery Furnace and The Prodigal Son. But Jones was pleased that Curlew River was selected on its own, to help commemorate the centenary of the composer’s birth [on November 22, 1913].

“It’s in a way the most secular” of the three short operas, Jones points out, “even though it has a religious standpoint. It’s an extraordinary story, and it’s incredibly humane. And it’s very different because of its provenance, a wonderful mixture of elements of Japanese Noh theater and medieval mystery plays,” originally performed to promulgate Bible stories.

On a trip to Japan and the Far East in 1956, Britten was particularly taken with Sumidagawa, a Noh play written in the 15th century by Jürö Motomasa about a river ferryman and his encounter with a woman driven mad by a search for the son stolen from her by a barbarian. Several years after Britten composed Noye’s Fludde, based on a mystery play, he collaborated with novelist and poet William Plomer on transplanting the Noh play, with its Buddhist references, to a Christian parable, set in medieval times on and alongside a river in East Anglia.

The characters of the Madwoman and Ferryman were retained, but in keeping with the all-male tradition of mystery plays, these roles were written for tenor and baritone. Britten and Plomer added the characters of a Traveler, an Abbot, the Spirit of the departed boy, three Acolytes, and a chorus of Pilgrims. The religious figures commence and conclude the performance with a ritual procession and an incantation in Latin. Curlew River was first performed in a Suffolk church in 1964, with Britten’s musical and domestic partner Peter Pears in the role of the Madwoman.

After taking on the design and direction of the opera, Jones researched the Japanese and medieval models, as well as diary entries and letters written by Britten about his Asian journey. “My visual elements are highly influenced by Japanese ideas of darkness and light, and by other things that struck Britten about Noh, its stillness and the beautiful and elaborate costuming,” Jones explains. “The performance starts with the plainsong of monks, and this introduction is just natural theater lighting, warm and discrete, intimate. When the story starts and we are in the more Japanese element, the projections come in. Projection light is altogether different, sharper, more stark in a way, but it can be even more beautiful because it’s so controllable. I use the projection for visuals, obviously, but also for illumination, to interact with the performers themselves during the storytelling part.”

As with all Britten creations, the music is an active agent in the storytelling. The composer, in his notes for the London Records original cast recording, claimed that, “There is nothing specifically Japanese left in the Parable that William Plomer and I have created,” but pentatonic structures and glissandi evocative of Japanese forms are in evidence throughout the score, composed for a chamber ensemble, with the soloists in the current production accompanied by the Britten Sinfonia and the Britten Sinfonia Voices. Britten also associated particular instruments with the principal characters, as well as a particular set of tones, resulting in a musical treatment which is unique and, for Jones, theatrically evocative.

“The fact that each character has its own sound world, its own motif, is part of why the piece comes across so clearly,” Jones states. “It’s a sparse orchestration which nonetheless feels very rich. And I’ve been very interested in the social hierarchy, which comes from both Noh tradition and medieval mystery. We have a Ferryman who is the salt of the earth, a practical, outdoor, rugged man, a simple man. On their first encounter, the Madwoman, on the surface, is of a similar social standing, but we learn that she is aristocratic.” She’s impressed with the current production’s “dream cast,” which features British tenor Ian Bostridge as the Madwoman. (The singer will return to Cal Performances in Spring 2015, in a recital of The Music and Poetry of the Great War, with songs by Britten, Weill, Mahler, Lehár, and World War I soldier-composers Butterworth and Gurney.)

Jones describes her production at New York’s Synod House as site-specific to the “ecclesiastical” setting, somewhat in keeping with Britten’s original vision. But she looks forward to the different “end-on” setting at Zellerbach, which, “although it’s so large, is strangely intimate. We’re actually building the stage out a little bit into the auditorium, to bring the performers even closer to you. And it can get very black there, which is a very theatrical gesture.” Curlew River’s “residency” at Cal Performances will also include Jones’ pre-performance talk on November 14, and other activities on campus and in the community, described here. “I”m always interested in looking at any number of layers of a thing,” says Jones, “and with opera in particular, the more you put in, the more you get out.”