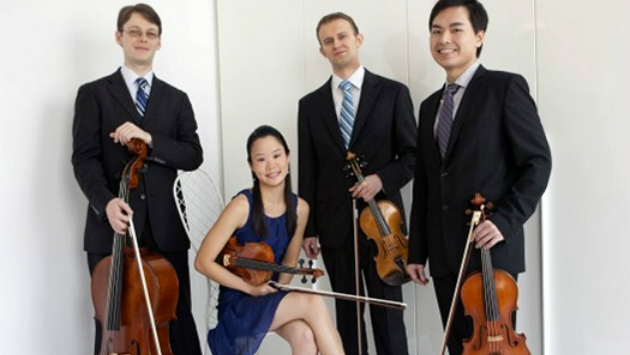 A creation of youthful musical genius will cap next week’s 30th anniversary all-star concert celebration of the Irving M. Klein International String Competition. That piece — Felix Mendelssohn’s Octet — is an entirely appropriate reflection of the competition itself.

A 16-year-old when he composed the Octet, Mendelssohn would have been a peer of the Klein competitors, ages 15 to 23. Although the young Mendelssohn was a keyboardist and not a string player, his writing “had that bubbling, wunderkind quality, which is definitely a part of what’s fun about our competition,” says Mitchell Klein, the event’s founder and artistic director. “It’s got those fast, dramatic, rhythmic passages, which all eight players share and bat back and forth, an anything-you-can-do-I-can-do-better kind of thing.”

Six of the eight players will be past winners of the competition who’ve gone on to wider recognition, among them, Klein said, “Frank Huang, who’s just been appointed concertmaster of the New York Philharmonic, and won in 1999; David Requiro [now a professor at the University of Colorado] in 2006; and Tessa Lark [of the Trio Caesura] in 2008. And all three of them, by the way, went on to win the Naumburg [Competition].” Also featured will be violist David Kim, second-prize winner in 2004, and the Amphion Quartet, two of whose members, Mihai Marica and Katie Hyun, were Klein winners.

The program of the concert, on June 2 at 7 p.m. at the San Francisco Conservatory of Music’s Hume Concert Hall,  also includes the Handel-Halvorsen Passacaglia and Barber’s String Quartet, which incorporates the famous “Adagio for Strings” in its original form. The evening will auger the competition itself, held on June 6 and 7 at Knuth Hall at San Francisco State University. This year’s eight semifinalist violinists, violists, and cellists were selected from 75 entrants from nine countries.

“And they have to play their concerto, of course. And then they also have to play the commissioned work, which we feel is important, because we need to know that they are listening to and performing the music of their time.” Paola Prestini, composer of this year’s new work, is one of the jurors, “so they know they’re being listened to very carefully. And then they have to perform a sonata, because so many of our prize performances [awarded to first- and second-prize winners, along with the cash] are recital series. How they form their two programs — a semifinal and a final program — says a lot about who they are as larger artists, not just whether they get the notes right and in tune. And how they present themselves on stage, whether they carry that aura of the engaged and joyful performer, makes a huge difference.”

The other jurors include past winners, as well as Bay Area master teachers, balanced by age, gender, and instrumental or compositional experience. For the first time, this year, “we’re setting up a whole formal session, where all the performers will have a chance to talk with each one of the jurors at some length,” says Klein. “So they’ll get comments, and also potential future mentoring.”

The competition is named for its founder’s father, Irving M. Klein, who “loved teaching students of high school and conservatory age. So one of the things we positively decided was that we’d have a welcoming, nurturing, humane kind of atmosphere. From the beginning we made sure all of the out-of-towners who don’t have family in the area would be staying with host families, who take good care of them.” Among the annual hosts are Tom Driscoll and Nancy Quinn, whose warm and spacious Monterey Heights home in San Francisco is also the site of “a big potluck chamber music session on the night of the semifinals, where the people who didn’t go on to the finals play chamber music with each other and are brought together with members of the Alexander Quartet or other ensembles based in the area.”

And the good vibes extend beyond the frame of the competition, to master classes presented in high schools by the winners, many of who continue this outreach as they develop their careers. Klein points to winners Robert deMaine (1990), now principal cellist of the L.A. Philharmonic, who offered a public master class last year, and Mark Kosower (1992), principal cellist of the Cleveland Orchestra, who’ll be doing the same in December of this year.

Klein credits an improvement in music education, selectivity in the audition process, and global exposure through social media with increasing the level of quality among his competitors. “Everybody hears what everybody plays around the world now,” he says, “so I think the world standard is rising.” Better communication also makes for wider acknowledgment of the competition, although, “we’ve clearly focused more on mission than on publicity. What’s gratifying is that the winners themselves are doing such extraordinary things. During the 100th anniversary season of the San Francisco Symphony, six other top American orchestras performed at Davies, and all but one had Klein winners among their principals, while all of them had winners in their string sections.”

Irving M. Klein, who passed away a year before the competition was born, would have been very proud.