Catching up with the Real Vocal String Quartet

“We are explorers and we just love music without boundaries,” says Irene Sazer, founder of the Real Vocal String Quartet (RVSQ). And that is a good description for a novel and innovative group that combines mostly original music with influences from classical, folk, pop, and jazz from all over the world, performing as a string and vocal quartet. Such an original combination — and it works. 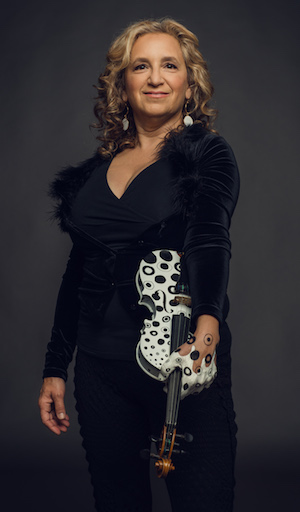 Sazer grew up in Los Angeles in a musical family. Her father was a cellist, and she was the youngest of four kids, and “everybody played instruments,” she says with a laugh.  Her mother always had the radio turned to an alternative station that played folk music from around the world, and she was also exposed to all the iconic Summer of Love rock music that dominated California in the ’60s. She began studying violin at age 7 and took voice lessons on and off. When she was 14, she attended a summer music program and was chosen as concertmaster, which surprised and delighted her, and it was then that she decided to pursue music professionally — but not in a traditional way.

The RVSQ was conceived when Sazer, one of the original founders of the Turtle Island String Quartet, left to do a solo project. During that same time, she got pregnant and had two kids in a row, which kept her very busy. “I started RVSQ because after five years of parenting little ones, I was desperate to be creative. It really came from desperation of the soul,” says Sazer. The group released its first album in 2010, and released its latest album, Slacker Ridge, in 2016.

Fast forward to 2017, and the RVSQ has gone through a complete metamorphosis, with several exciting projects on the horizon. To start with, along with Sazer and cellist Vanessa Ruotolo, there are two new members in the group: Canadian violinist Adrianna Ciccone, a graduate of the Berklee School of Music in Boston, brings Celtic fiddling and stepdancing into the mix. Violist Sumaia Jackson, also a graduate of Berklee, is passionate about old-time, jazz, and bluegrass. These new additions will surely take the group in new and exciting directions. 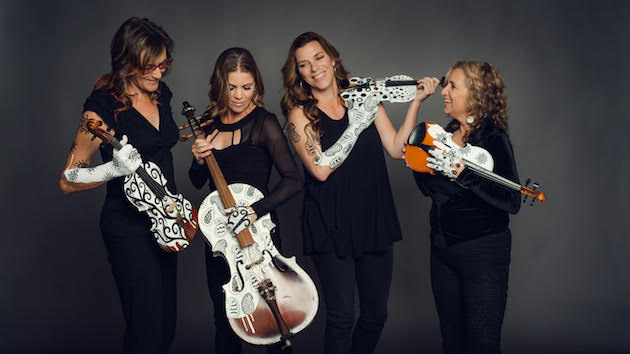 “Everyone is a phenomenal improviser,” says Sazer, who explains that finding players for the group can be difficult, because each member must be able play an instrument well, and must also sing, improvise, compose, and be interested in all kinds of music.

This year the group was selected to received one of six Special Awards in the Arts from the Wallace Alexander Gerbode Foundation, in collaboration with Women’s Audio Mission.

“This is one of the most exciting things that ever happened in my musical life and I am really excited,” says Sazer, who added “I’m kind of proud that I wrote the grants in collaboration with this most amazing organization in San Francisco called Women’s Audio Mission, who train women from underserved communities in audio engineering.

The project is called Culture Kin, and they are collaborating with musicians and composers, visual artists, spoken-word artists, and poets to create at least eight pieces that will be premiered in two years at Yerba Buena Center for the Arts, when they will also be recording their next CD.

But wait, there’s more. Sazer is also working on another project that is near and dear to her heart — a fundraiser for Syrian humanitarian aid at Freight & Salvage Coffeehouse in Berkeley on May 11. “This was something I conceived of before the election, because I was deeply, deeply disturbed by the rhetoric of racism in the [presidential] campaign,” says Sazer. “What’s going on in Syria is devastating, and I felt like I just had to do something.”

And to cap off all the current comings and goings of the RVSQ, they were recently selected as one of four finalists in the University of South Carolina’s SAAVY Chamber Competition.

“The only reason we even applied to this competition was because they’re looking for innovators, a “combination of artistic excellence and innovative event design,” says Sazer,  “so they went crazy for us because they were looking for out-of-the-box innovators. It’s exciting to be a finalist!” They will be going there in June, hoping to win the $10,000 prize!

And what does Sazer have to say about all of this: “It’s just thrilling!”