The Rite Stuff: Bad Plus Trio 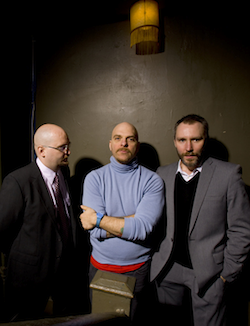 Since the turn of the millennium, The Bad Plus has earned cred as a trio which, despite its wide appeal, resists being confined by musical conventions, whether they involve familiar rhythmic and harmonic structures or genre pigeonholing. Though his group is most frequently seen at jazz venues and festivals, bassist Reid Anderson, who turns 42 this month, points out that, “I grew up listening to rock music, and we’re very conscious of not denying our influences. To play music with a kind of rock energy is the most natural thing in the world to us, and we don’t feel we need to shy away from that, just because we’re ostensibly jazz musicians.”

On their eight albums to date, The Bad Plus’ quirky covers of such rock tunes as ABBA’s “Knowing Me Knowing You,” Queen’s “We Are the Champions,” and Nirvana’s “Smells Like Teen Spirit” far outnumber jazz covers such as Ornette Coleman’s moody “Street Woman.” But a recent commission from Aaron Greenwald at Duke University, during a residency there, thrust the trio into the classical arena. “I think it was our booking agent [Todd Walker] who suggested we do The Rite of Spring,” Anderson recalls. “We sort of said, okay,” he giggles, “but isn’t there something easier we could do? But the fact is, it was a really good idea. We’re all big fans of Stravinsky, and the things we’ve taken on in the past have often had that sort of anthemic quality. So it seemed like the right kind of challenge, in line with our collective aesthetic.”

After their Duke residency, the group took the commission on the road under the title On Sacred Ground: Stravinsky’s Rite of Spring. Returning for their third appearance with San Francisco Performances next Friday, The Bad Plus’s take on The Rite will involve more than just Anderson’s bass, Dave King’s drums, and Ethan Iverson’s piano. “Drama is one of our things,” Anderson points out. “So there will also be video and lighting elements by Cristina Guadalupe, an architect, and Noah Hutton, a filmmaker. One of them will be with us, doing live DJ-ing of the video [using a laptop]. And in the second half, we’ll directly reference the original choreography and costuming [by Vaslav Nijinsky and Nikolai Roerich for the Paris premiere by the Ballets Russes, in 1913]. A good friend of ours, Julie Warden, will be dancing as the sacrificial virgin [Chosen Maiden].”

It seemed like the right kind of challenge, in line with our collective aesthetic ... drama is one of our things — Reid Anderson

The group worked on The Rite off and on for over a year, in the process of the sort of national and international touring demanded by their expanding fan base. “We spent a lot of extra hours at sound checks, just trying to play this music and internalize it as much as we could,” says Anderson. “It’s a lot of notes and information, so we had to take it very seriously. Mostly, we worked with the four-hand piano version [published in 1912], and we did our best to be true to all of the notes in the score.

“Of course, there’s no part for a drum set in the score, so that was completely invented,” Anderson continues. “And I had to figure out, what do I play, because it wasn’t just a matter of playing the bass line from the score, it had to be a completely invented part. Ethan took as much as he could from the four-hand piano score, adapting it to his own two hands.”

Stravinsky’s century-old detours with tonality, dissonance, meter, rhythm, and stress curiously paralleled The Bad Plus’ own eccentric approach to composition and arrangement. “The rhythms [of The Rite] are very sophisticated and forward-thinking,” observes Anderson, “the way you have these multiple layers and very complicated ostinatos that don’t really repeat. But we didn’t want to do a jazzy thing, where we’d take some themes and improvise on them. That would seem like an easy way out, it’s been done before. We wanted to take on the bigger challenge of, let’s get inside this thing and play it, and bring something from the inside out.”

We wanted to take on the bigger challenge of, let’s get inside this thing and play it, and bring something from the inside out. — Anderson

Of the trio members, Anderson is the only one “that has a classical pedigree: I went to the Curtis Institute for three years. But Ethan has really incorporated the classical style of piano playing, but in a very personal way, bringing it into an improvisational setting.” Anderson and drummer King first started making music as junior high schoolers in Golden Valley, Minnesota. “We were into progressive rock, like The Police and Led Zeppelin and stuff like that. We didn’t have any musical mentor guidance, we were discovering things on our own.”

While attending the University of Wisconsin in Eau Claire, Anderson was introduced by one of his professors to Iverson, a pianist from the nearby town of Menomonie with whom he shared a bourgeoning pull towards jazz. “We were interested in more traditional jazz, things from Charlie Parker to John Coltrane, but also definitely had our eye on the avant garde,” says Anderson. “You listen to the record Science Fiction [recorded by Ornette Coleman on Columbia, in 1971] and you say, that’s pretty personal music. The bassist Charlie Haden was an important figure for both of us too, and the drummer Paul Motian.”

Iverson met King through Anderson and “the three of us were all involved with each other to one degree or another over the years, and spent a good 10 years laboring in obscurity with various projects of our own.” Ultimately combining as The Bad Plus — a name “made up by Dave [King], to be memorable and declare that we’re all equal members, not the So-and-So Trio or anything,” — the three like-minded musicians managed to land a three-night gig in New York City. “The first set there were maybe six people, but the last night was completely sold-out, so we knew we were on to something, and we really felt it was something worth sticking together for the longer term.”

Over a decade of establishing their name, the group has become known as much for their unpredictable covers as for their original material, eliciting curious grins from those familiar with the rock ‘n’ roll source material. “I think what might come off as humor or irony must be us trying to look at these things from different perspectives, and employing different devices to try to discover something in these songs that makes them our own,” says Anderson.

Along with The Rite, The Bad Plus will present selections from Made Possible, their latest release on the eOne label, and other original material at the Herbst Theatre next Friday. “One of the core aesthetics that binds the three of us together is the desire to create something that’s personal and unique,” declares Anderson. “You can’t make music or art with the goal of being popular, but at the same time, I don’t believe in making music that denies its potential to be popular. Art in the 21st century has a real opportunity to walk that line, to try to maintain its integrity and also reach out to an audience. And if you can pull it off, it’s a pretty major achievement.”