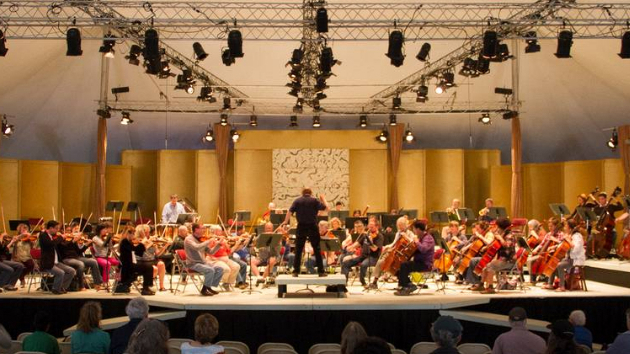 You might imagine you’re a supernumerary in a particularly lovely and long musical production, on a spacious stage with delightful Victorian-era facades on one side and a majestic ocean on the other. But in the real world, you’re wandering down Main Street between the three venues of the Mendocino Music Festival, which is rolling out its 29th season over the temperate afternoons and brisk evenings between July 11 and July 25. The mix of classical, chamber, world, and jazz performances is matched by the variety of delectable food and drink available within a few steps from the music, in a village determined to please all visitors.

“You know how when you go to Ashland, the whole town is about the Shakespeare Festival,” poses Barbara Faulkner, the Festival’s  executive director. “Well, we’d like to have people coming down Main Street and saying, ‘Oh, something festive is happening all over Mendocino!’” Toward that end, on the very first day and for the very first time this year, the coastal town’s shops and galleries will showcase their entries in a festival-themed window display contest. And inside, many of these businesses will host members of the festival orchestra, ready to inform customers about what’s to come in the following two weeks.

The town has reason to celebrate. “In our 2014 economic analysis,” says Faulkner, “we found out that we put into the community, directly and indirectly, over a million-and-a-half dollars. So when we go around talking to businesses, we can say, ‘Look what we do!’” The benefit, of course, extends to the hotels, inns, and bed-and-breakfasts in Mendocino and nearby communities, which accommodate both musicians and festival-goers and are listed on the www.mendocino.com website.

After discovering the town on that first Saturday, ticketholders will assemble under the giant seaside Tent Concert Hall for the first offering of the orchestra, under the baton of festival co-founder and artistic director Allan Pollack. Along with their performance of Shostakovich’s Jazz Suite No. 2 and Prokofiev’s Symphony No. 7, the program will feature Latitude 41 violinist, Juilliard alumna, and Stanford faculty member Livia Sohn in Tchaikovsky’s Violin Concerto.

On Sunday, July 12, occupancy of the tent shifts from Russian classical to French-Canadian folk, with groups De Temps Antan and Vishten. In the week following, the smaller venue of Preston Hall, a couple of blocks to the east, will host more intimate sonata and solo performances. “Punch was the drink of the day, and we’ll be serving what hopefully duplicates the kind of punch that Mozart and his compatriots would drink.” — Allan Pollack

Pianist and Festival associate artistic director Susan Waterfall will launch a four-concert celebration of Mozart with a lecture on July 19 under the tent and the title, “Mozart, with Punch and Dreck.” “Punch was the drink of the day, and we’ll be serving what hopefully duplicates the kind of punch that Mozart and his compatriots would drink,” says Pollack, who’s also Waterfall’s husband. “The ‘dreck’ has to do with the language of the time, when preoccupation with bodily functions and scatological words was tremendous. Susan’s going to explain what that meant to Mozart, with the help of Bob Winn, a retired historian from the College of the Redwoods. On Monday afternoon [July 20], she and Carolyn Steinbuck will do a concert of Mozart’s music at Preston Hall, with the ‘Kegelstatt’ Trio and lots of other things.

“Then on Tuesday [July 21],” Pollack continues, “in the Sanctuary of the Mendocino Presbyterian Church, we’re doing Mozart’s G minor String Quartet and the C minor Wind Octet [with members of the orchestra]. On Wednesday [July 22], the orchestra will cap off the whole thing with the Overture from The Abudction and the “Jupiter” Symphony. And Frederica von Stade will sing some of her favorite Mozart arias.” Greeted as ‘Flicka’ by the many who’ve relished her annual returns to Mendocino, von Stade will be partnered by soprano Melissa Angulo and baritone Jeremiah Smith, teenaged singers with the Berkeley-based Young Musicians Choral Orchestra, on whose board von Stade serves.

Eugene Brancoveanu returns to the tent in the dual capacity of director and baritone title character in the Barber of Seville, on July 17. “We do funny operas very well,” Faulkner promises — though Brancoveanu and his ensemble, culled from some of the best of Northern Californian freelance voices, did very well a year ago with Don Giovanni, which is by no means a farce.

The complete three-week schedule and tickets are available online at www.mendocinomusic.org, though tickets are also sold at the Festival office and outside the entrance to the tent. Pollack feels it to be “a real privilege” to be conducting the Brahms Requiem on July 25, the festival’s closing day, alongside a final work of Mozart, the Piano Concerto No. 21, with pianist Spencer Meyer. “The winged chariot is waiting for us all,” sighs Pollack, who’s recently experienced the deaths of several close friends, “and in the Requiem there’s this whole search for comfort for those of us who are still living.” He gives thanks for the survival of the Festival, which sold 10 percent more tickets in 2014 than in the previous year. “I don’t know how we do it,” says the conductor, “but we’re still here.”