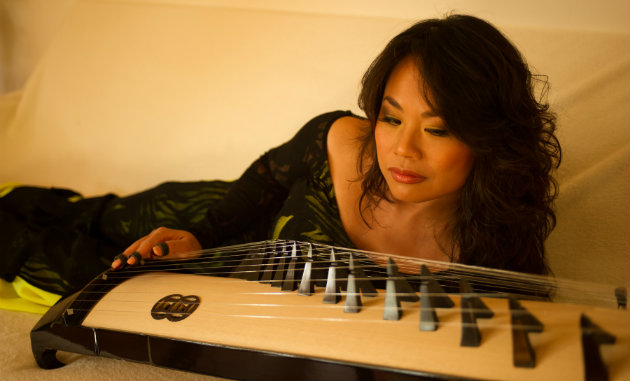 Imagine Vietnamese music as a gigantic water wheel. Picture an enormous, circular, bamboo structure churning beneath the country’s culture, generating energy and shooting out great sprays of liquid sound and sparkling droplets that in the metaphor represent individual musicians.

In such a landscape, Emmy Award-winning, Vietnamese-American composer and performer Vân-Ánh Võ is both a shining product and a porous vessel. Taking the Bay Area by storm, she performed in the Kronos Quartet-hosted, Terry Riley 80th birthday celebrations and the world premiere at Stanford Live of Jonathan Berger's opera, My Lai (both 2015). In January 2016, her latest composition, The Odyssey — From Vietnam to America, made its world premiere at Yerba Buena Center for the Arts.

Her upcoming, Feb. 12 world premiere, Võ’s second this year, Lullaby for a Country, will feature the Fremont-based artist as soloist with the Oakland Symphony. Sandwiched around her appearance with the orchestra at Oakland’s Paramount Theater: a performance with David Coulter at the Kronos Festival (Feb. 6 at SFJAZZ) and an engagement with Stanford's Pan-Asian Music Festival (Feb. 19).

To say Võ is making a splash is an understatement. Her compositions’ rippling blend of musical genres and music played on her native country’s instruments — including, among others, a custom-made, 25-string dàn tranh (zither) and a deep-throated đàn Bầu (monochord) -- and often sung with her luminous vocals, have mesmerized musicians and audience alike. Võ has collaborated with Kronos Quartet, Yo-Yo Ma, and many others. She has presented her music at Carnegie Hall, Kennedy Center, Lincoln Center, NPR, and more. “For the symphony, I love the timpani and the bass drum. In Vietnam, we mostly have the high-pitch, high-frequencies; that’s why I love the low, rounder-sounding Western instruments.”

“Our music has mainly melodies, so I love rhythms like those in jazz and African music,” she says, about combining other styles with traditional, Vietnamese music. “For the symphony, I love the timpani and the bass drum. In Vietnam, we mostly have the high-pitch, high-frequencies; that’s why I love the low, rounder-sounding Western instruments.”

Her father introduced her to the cello when she was a young girl growing up in Hanoi. But she was attracted almost instantly to the physicality and challenge of playing the dàn tranh. It is the instrument’s expressive range that she has most enjoyed exploring.

“Joy,” for example, consists of different levels, she says -- with internal joy evoked by her finger’s fast, light touch to the tops of strings close to the bridge. Deeper joy moves closer to the warm sound residing near a movable bridge she places on her 165-centimeter dàn tranh. (A standard dàn tranh is 90 centimeters). The longer instrument  was built to meet her interest in creating a wider range of sound. “I had to stretch my hands wider. I had to open my whole body to reach. It took me three months to get strong: [playing it] was like a workout.”

Võ’s lullaby incorporates the composer’s interest in sound: the full string section used for voluminous sound, harp “like a raindrop,” horns and timpani for the clatter of females conversing, an oboe “not too high, like a coronet or too low, like a bassoon” for a middle-age voice, and full orchestra for the last section, “New Dawn,” which, Võ says, “draws up hope with maximum scale.”

Less complex, but no less compelling, she says the work is rooted in the role of women in Vietnamese history and culture who were largely “invisible” but as strong as the bamboo that survives annual typhoons and has even been used to make weapons.

Women weren’t supposed to participate in social activities or go out of the house. However, I admired them and what they did to change what I can do these days. The strength of the union of women, is like bamboo. You will never be able to destroy it: If you cut it down, it will grow back. If you move it, it will jump to a new place."

Jumping to uncharted territory is arguably Võ’s preoccupation as she scours the globe for new music with which to showcase her instrument. “I don’t want to play a cover. The line I walk is so fine: Experimental can be good or terrible. Sometimes, a song is written for a specific instrument and it has it’s perfect moment. But if I hear a piece and know it will show my inner voice, I will find a way to play it in a new image.”

“The traditional works are included to introduce new audience members of every age, and particularly from the Vietnamese community, to the orchestra in hopes that they will join us again for other programs,” says Music Director Michael Morgan.