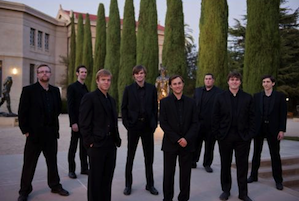 For many of us, college is the starting point on a journey leading far from home. For Daniel Crowley, the journey led right back where he started, and he couldn’t be happier.

Raised in Foster City, Crowley started singing early, first in his church choir, and then in the Peninsula-based Ragazzi Boys Chorus, where he was exposed to what he recalls as “a broad range of music” and “a high level of rehearsal and performance etiquette that you don’t get in a lot of school choirs.” Ragazzi performed with the San Francisco Opera and Symphony and other Bay Area institutions, recorded on the Symphony’s Grammy-winning Perséphone and on their own CD’s, and toured nationally and internationally.

Eventually, Crowley said farewell to Foster City and Ragazzi and headed off to major in government at Claremont McKenna College in Southern California. Now a young adult tenor, he took private voice lessons at Scripps, sang in college concert and chamber choirs, and vocalized in a couple of pop a cappella groups. When he secured employment as a program manager with Google in Mountain View, returned to the Bay Area, and moved back in with his folks, he says he also started seeking “a rugby team and a choir, the two passions I had in college.” Crowley quickly joined the San Francisco Fog Rugby Football Club, of which he’s now president. And he found the makings of another sort of team among the boys he’d grown up singing with, now men with jobs, their joy in music undiminished. Assembled through e-mails and social media, this small group of Ragazzi alumni became Ragazzi Continuo, which will be celebrating its third season with An English Renaissance, a series of three concerts later this month.

“We’d all kind of been searching around,” says Crowley about the group’s formation, “and nothing like this existed. There was Chanticleer, and larger and mixed choirs, but there wasn’t the niche that we all longed for and had loved when we were in high school.”

“I think we had a common experience that was very unique,” adds fellow Continuo tenor Ross Morey. “The boy choir culture [of Ragazzi] was a really special one. A lot of times, younger boys feel intimidated or embarrassed by having girls there, and in that environment of only having your male peers, it nurtures a sense of camaraderie. To come back to Continuo and rekindle those relationships was really special. A lot of the guys had gone off in college to really terrific established choral groups. But Ragazzi was unique, because we’d all been taught to sing our vowels in the same way. There’s a lot of things we don’t have to work on now.”

“I think we had a common experience that was very unique ...we’d all been taught to sing our vowels in the same way. There’s a lot of things we don’t have to work on now.” - Ross Morey

Morey, brought up in San Carlos, had sung in choirs at UCLA, under the leadership of Don Neuen, and had founded Bruin Harmony, a campus pop a cappella group, and the Los Angeles A Cappella Festival. “Then I ended up coming back to the Bay Area and co-founding A Cappella Records with Chris Crawford, whom I met through the Festival,” Morey explains. “But it’s different, handling the business and legal aspects of music, versus actually getting out there and making it. I just felt that part of my experience was missing,” and Continuo offered the solution.

Getting Continuo going was easy, from the group’s very first meeting. “The discussion wasn’t, do we want to do this, it was, we are doing this, what kind of music do we want to sing,” reports Crowley. “Then we took the best parts of what we’d been in high school, and just tempered them with age. We didn’t have to deal with personalities, and we all had the same kind of training.”

The members of the new ensemble, now comprising eight singers, provided Ragazzi additional alumni support beyond occasional parts in the boys’ concerts. “I teach one of their Primary ensembles,” notes Morey. “These are boys who’ve recently auditioned and are brand new to the organization; five, six, or seven years old. It’s really gratifying to come back and work with that age group.” He also teaches voice and piano privately.

“I love when we get to work with some of the younger kids on a piece of theirs,” says Crowley, “because they can see, ‘Oh, these guys went off to great colleges, they all came back, they’re working in great careers, and they’re still singing!’. It shows some continuity.”

Continuo’s own development involved the election of a couple of artistic directors from within the group — Morey and Jesse Buddington — and the selection of repertoire. “Looking back at concerts we’d done, the Renaissance is something we all felt very comfortable with and had enough training in,” recounts Crowley, so that this month’s Renaissance program was seen as “really helping unify our sound.” “Having grown up in a boys’ chorus, we have a straight tone, and it works for that type of polyphony,” adds Morey, noting that favoring English Renaissance songs over the better-exposed Italian is “a special thing, because you’re performing in a language your audience can interact with.”

“I want to explore more world folk music and American traditional, and to grow into a more modern era, take our sound and bring it to places where it hasn’t been before.” - Daniel Crowley

Crowley sees this set of concerts as showcasing Continuo’s trust in its own programming decisions, as well as “a great blend of different aspects of the Renaissance. You have your classic composers of the English Renaissance,” including Morley, Dowland, Farmer, and King Henry VIII. “We also have an Elgar piece that takes an old Renaissance text and brings it into the Romantic era. And we’ve blended in a modern Finnish composer [Jaakko Mäntyjärvi], who took Shakespearean texts and adapted them. We start out in the Renaissance, and then it grows from there. So I think it shows that music’s continuing nature: It’s constantly evolving, constantly being adapted.”

Continuo’s own adaptation to wider exposure and repertoire includes the recent hiring of a manager, Eryl Aynsley, who formerly served as executive director of Ragazzi, and the selection of Crowley as next season’s artistic director. “I’m hoping to take this core sound, grounded in the Renaissance and classical sensibilities, and evolve it,” he says. “I want to explore more world folk music and American traditional, and to grow into a more modern era, take our sound and bring it to places where it hasn’t been before.”

Morey looks forward to occasionally integrating Continuo in the popular Ragazzi family concerts, alongside the junior choristers. “It’s a selling point,” he points out, “to see how far their boys can go.”