Mason Bates Consults the Ouija Board for His Ghostly Auditorium 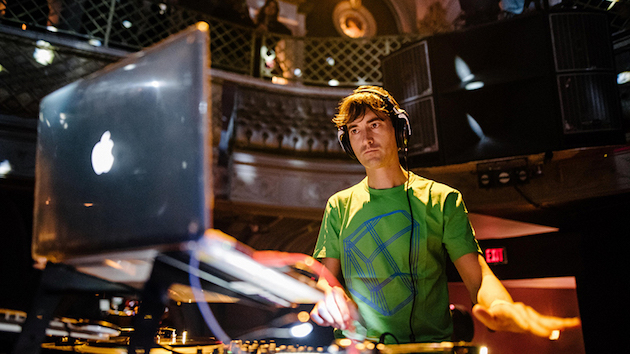 Musicians won’t fling French horns or launch lutes or flutes across Davies Hall during the world premiere of Mason Bates’ Auditorium. And an ensemble of ghosts riding on harpsichords and wielding theorbos or other Baroque instruments won’t literally swoosh onto the stage. Even so, Bates says in an interview, “When the orchestra tunes and the baroque ensemble tunes, it’s like a poltergeist.”

A half-step difference in tuning, the brighter thirds and other features defining a 21st century orchestra’s instrumental ancestors — 17th-century Baroque instruments — will arrive courtesy of Bates, who will join Michael Tilson Thomas and the San Francisco Symphony for the SFS-commissioned work.

Auditorium is like the interior zone of a giant mind or a magnificent Ouija board, Bates suggests. A call and response between the live SFS and the “dead” orchestra wafting out of Bates’ electronic/techno setup is in some ways a metaphorical battle, as electronically processed sound presses into a classical blueprint. Or perhaps the two musical bodies are more like a ghostly pas de deux, a dance for two apparitions — one solid, one ethereal.

If so, Bates says the baroque instrumentation adds vulnerability laced with bluegrasslike energy to the dance. “Baroque instruments weren’t powerhouses of engineering. It required effort to create particular sounds, which makes them sound scared, vulnerable.” But far from fragile, the players of these early instruments could jam. “We think of Baroque music as having purity, but man, there’s a whole lot more energy with which musicians had to play. It’s like prebluegrass,” he says, before mentioning as examples Italian violinists and composers Marco Uccellini and Carlo Farina. “Michael (Tilson Thomas) gave me a list of names to explore. Auditorium rises out of my love for 18th century music, which I’d not delved into until recently.”

Delving is becoming commonplace for Bates, who says his long association with SFO has been pivotal to his career. With the orchestra as his medium and enough time to “go the long haul” to develop his craft, the musicians are on his phone’s speed dial. “I can call them up, literally. And because they live their lives inside a five-line staff, they can help me write more idiomatically.” Tilson Thomas, he says, allows him to run with ideas, inhabit the space, and partners with him to prove that a concert hall orchestra can withstand and even thrive during the digital age. The administration joins the circle by extending concert performances into adventurous, social experiences that can touch a community. “The more they do, the deeper people can go with and into classical music,” Bates says.

Of course, the militant maverick tendencies that he says artists must retain — and the disrupter significance of compositions that elbow aside safety or sensation — are paramount if classical music is to remain vital, alive, visionary. Although it’s gratifying to see the success of Mothership, his 2011 composition that brings improvisation and electronica to more orchestras than he ever imagined, Bates knows the danger to his composer-self of lapsing into establishment or mainstream repetition: “Thinking about music all day can turn your head into an echo chamber,” he says.

Fortunately, his mind customarily makes unusual associations that keep him on the crooked path of an adventurer. Hearing similarities between the rhythms of Baroque bourrées and house music, or connecting Apple founder Steve Jobs to sounds resembling David Grisman's acoustic stylings with electronica for an opera he’s writing for Santa Fe Opera, comes naturally. “(Steve) Wozniak is a couple of saxophones,” he says, about the Apple co-founder. “Kobun (Chino Otogawa), Job’s spiritual adviser, is Buddhist gongs and sounds that create a nirvana world.” 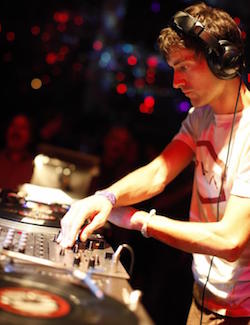 Perhaps more than — or at least equal to — the varied nature of Bates’ crossover musical experiences as a DJ and as a sought-after composer for orchestras, two decades of hard work have presented him with unique opportunities. In addition to the new opera, Bates has wrapped up a multiyear residency with the Chicago Symphony Orchestra and is currently serving as the first composer-in-residence of the Kennedy Center for the Performing Arts. In March, three of his largest works — Alternative Energy, Liquid Interface, and The B-Sides — were released on a full-length CD by SFS Media. In a blog on his website Bates notes the pleasure of having music previously heard only in concert halls and large performance venues now playing daily in people’s living rooms.

All the activity leaves one obvious question: What does Bates do to refresh?

Listening to other people’s music — composers and music-makers both dead and alive — takes care of the business part of the equation. “Life refreshing” is handled largely by his family: his wife and their two young children. Surfing at Muir Beach or picking his kids up from childcare and spending a no-devices evening at their home in Burlingame, the Bates clan “hangs out.” Bates says, “It cleans your head.” With no ghosts left behind, his “giant mind” is free, ready for the Ouija board’s next magnificent project.