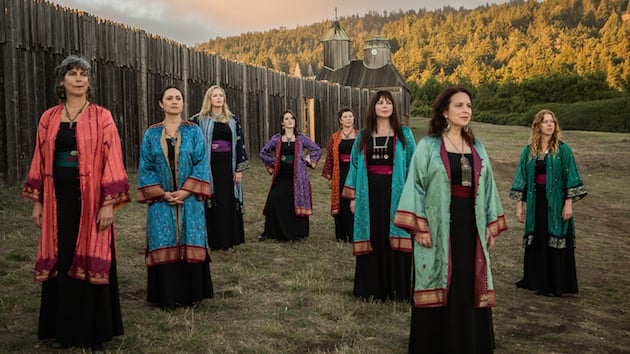 Except for professional vocalists, people hearing a recording of themselves often remark, “That’s not how I sound—is it?” If it’s difficult to recognize one’s voice, it’s harder to see bias in our behavior. Is it impossible to imagine oneself in another person’s shoes?

One answer is given in Iron Shoes, a joint production of Shotgun Players and Kitka Women’s Vocal Ensemble. Based on three East European folk tales, the work centers on two stories about women cursed to wear iron shoes until the shoes are worn out and a third tale of an armless woman who cannot save her baby after accidentally dropping her into a well. In all three tales, the women are unjustly damned, powerless victims of evil beings or fate—until by banding together in the production’s contemporary retelling they claim ownership of their destiny, a shared victory, or at least recognition of the strength in their collective voice.

“It was during my childhood I read stories about women who were cursed to wear out iron shoes. I was fascinated,” says Kutulas in a phone interview. “It seemed so forever: How long would it take to wear out a pair of iron shoes? Another story had a woman eating through three loaves of iron bread. How someone would whittle through iron, the powerlessness of the victims, that they’d just accept their fate—as a kid, I wondered why they’d do that and who’d make them do that.”

But as an adult, Kutulas says the matter-of-fact language of fairy tales to her lacked the color it once held and seemed flat, like cardboard. That is, until she was haunted by the thought, “Who writes your story and determines your path?”

The question caused her to compose a song cycle based on the iron shoes stories, which Kitka premiered at Piedmont Piano Company in March 2013. Kutulas has been a singer and co-director of the eight-woman ensemble dedicated to Balkan, Slavic, and Caucasian women’s vocal traditions and repertoire since 1988. A professional flutist trained at San Francisco Conservatory of Music, she has performed in the Bay Area with Berkeley Symphony and California Symphony, among others, and was a founding member of Earplay, a contemporary music ensemble.

Iron Shoes was seen at ACT in 2015, with Shuch joining to direct and add movement. “We explored ways to tell the stories other than stand there and narrate,” remembers Kutulas.

Even so, something was missing. Inviting Carter to join the team, the three women investigated extending the narrative in a 2016 Berkeley Repertory Theatre Ground Floor residency. “We added a female narrator character. What the women in the stories have in common is that they … have a curse planted on them through no fault of their own. My idea was, what happens when they meet? Michelle coming in allowed us to explore how it applies to modern day women and what they’re facing. Who are women in fairy tales up against? Sometimes it’s stronger forces who are also women. How can they take their own fate into their hands?” The women whose stories are told—and judged—by the narrator, flip the dynamic and cast the narrator into iron shoes during the show’s second half.

Iron Shoes is “not a musical. It’s not an opera. It’s not a play,” Kutulas insists. Instead, it’s a journey, like one in a fairy tale in which a ball of yarn is thrown into a forest. Following the string, she says, means encountering mysterious, unexplained magic through “music that’s busted up by text and movement.”

Putting yourself in someone else’s shoes will change you, Kutulas suggests. Fairy tales are transformative, after all. Will the magic that put you in iron shoes pull you down, or will you use it to break free?