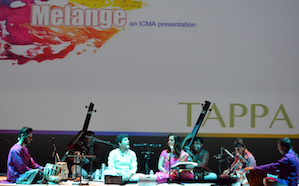 Indian classical music found a benign foreign environment in California in the 1950s and 60s: Ali Akbar Khan and his then-brother-in-law Ravi Shankar, respective virtuosos on the sarod and the sitar, found new audiences and record companies eager to broaden their musical horizons and spiritual awareness. Khan established the Ali Akbar College of Music in San Rafael, not far from his San Anselmo family home, and Shankar eventually found a lovely abode in Encinitas, where he and his wife Sukanya raised their daughter Anoushka.

With origins in Hindu spirituality (Khan’s father was also Shankar’s guru and music teacher), the sounds of India spread throughout the Western world, attracting rock stars (notably the Beatles), jazz improvisers, and instrumentalists and singers who’d previously trained in Western classical academies. Violinist and childhood San Francisco resident Yehudi Menuhin was among the music’s earliest and most enthusiastic hosts here.

There’s been a new infusion of Indian culture in these parts a half-century later, prompted in part by South Asian immigrants eager to fill jobs in the burgeoning high-tech industry and associated services. Among them is Mahesh Kale (pronounced ‘Kah-leh’), who came seeking a master’s degree in multimedia engineering and engineering management, but ultimately found that the musical training he received in his native state of Maharashtra (India’s second-most populous) topped his priorities.

Kale is among the third generation of students of the late Pandit Jitendra Abhisheki, a vocalist who figured in the performance of the Bhagavad Gita produced by Ravi Shankar. “Fifteen years after my guruji’s passing, it’s finally dawning on me why he did what he did,” says Kale. “He would make us play tabla [Indian percussion] or harmonium with him. And once you have a strong sense of rhythm, it is going to help you in singing.” Now a resident of Sunnyvale, Kale set up the Indian Classic Music and Arts foundation (ICMA) two years ago, and set himself the goal of presenting "our culture at large, the way it is back in India", rather than in traditional Western concert format which ushers audiences into and out of concert halls, where they must remain stationary.

The second of ICMA’s two-part events will take place this Sunday at the India Community Center in Milpitas. The Mysteries of Morning Ragas, whose title refers to the best-known genre of Indian classical music, will extend from 10:30 a.m. to 1 p.m., followed by an hour-and-a-half break. The afternoon program is dubbed Melange, because in a few hours it will showcase a variety of Indian classical and semi-classical and popular musics. Attendees are encouraged to wear formal or semi-formal Indian or Western clothing, and will be greeted by scents on their entrance to the hall. Aside from fashion, while perambulating to and from the programs and during the long break, they’ll get to share sweets and specialty foods from the celebrated Amber India restaurant, and to view artwork.

“We want to make sure our programs are projected as a celebration,” declares Kale, who speaks English with the accent and usage of his native land. “Because in the history of Indian music, it’s always been part of a way of life. When a child is born, people sing — there’s a thing similar to baptism when they would sing — when he gets married they would sing, even when he comes to die. And concert music started as something to be sung in praise of the Lord, but eventually it made it to performing in concerts. And over time, [all the music] became commoditized. What we are trying to do is put it back in context.”

“We want to make sure our programs are projected as a celebration, because in the history of Indian music, it’s always been part of a way of life.” - Mahesh Kale, director of ICMA

This year and last, ICMA’s event has been timed to coincide with Diwali, an annual celebration also known as the Festival of Lights, representing the Hindu epic Ramayana and associated with the end of the harvest season. The Mysteries of Morning Ragas — the raga is a long-form classical instrumental composition often linked to a time of day or season — are presented by vocalist Sanjuta Biswas and senior musicologist Pandit Vijay Kichlu, an ex-director of the Sangeet Research Academy in Kolkata (Calcutta).

“Since the expanse of Indian music is so diverse and the scope is so huge, I thought it would be a good idea to design a fast-paced snapshot of all the principal genres that fit under its umbrella,” says Kale about the meaning behind the Melange offered in the afternoon. “It moves chronologically. It starts out with the Vedic,” music based on early Hindu scriptures dating back more than three millennia. “Then we mention Dhrupad,” the oldest form of Hindustani singing still practiced.

“We go on to semi-classical forms such as Thumri, Dadra, and Kaththa,” he continues. “And Natya Sangeet, the classically-influenced theater music of Maharashtra. (Since I’m Maharashtran, I have more inclination towards that.)” Exploring devotional musical forms, “We get into Ghazal,” associated with the poetry of Rumi, “and Sufi Qawwali, and Abhang.”

Kale will serve as lead vocalist through all these song forms, and Ashvini Bhave, a director, producer, and actress with credits in the prodigious Bollywood film industry, will narrate. Instrumentalists will include Salar Nader, a tabla disciple of Zakir Hussain; Vivek Datar and Robin John on harmonium; and Pankaj Mishra, who’s coming from India to perform on sarangi, whose bowed strings produce an entrancing voice-like sound.

Since many seekers of Indian music have been turning to Youtube, Kale “thought it might be worthwhile to help the audience by enhancing the visual experience. So I’ll try to assign lighting colors to every single genre.” Also, video projections will provide further background on the genres, with appearances by the late Pakistani Qawwali superstar Nusrat Fateh Ali Khan and Linda Hess, a professor of religious studies at Stanford who specializes in Hinduism. “Without being preachy,” says Kale, “We are having the legends do the preaching.”

The event will serve as a fundraiser for the ICMA foundation, “and we are hoping to start supporting the future musicians of classical music back in India, who are financially challenged at the moment,” Kale points out. He in turn is grateful to those older musicians, like Ali Akbar Khan and Ravi Shankar, who reinforced the survival of Indian traditions by sharing them with the West. “I’m fortunate to be on the shoulders of these musical fathers of mine,” he says. “Your horizon increases.”