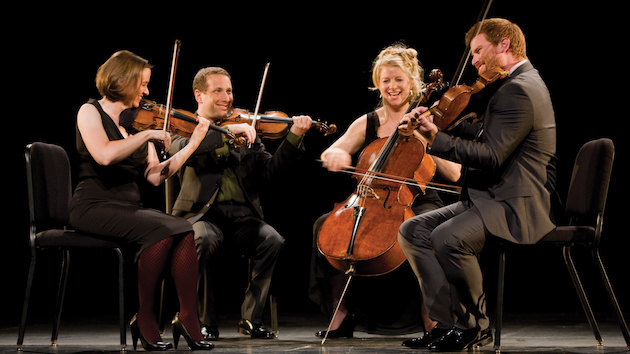 The soon-to-disband Cypress String Quartet commemorated another landmark finale last week with the last installment of its “Call & Response” program which commissions new works written in response to classical masterpieces and involves extensive outreach in Bay Area schools. And, ending as they began, the group is celebrating the music that was formative to its development and rise to prominence: Beethoven’s string quartets.

For this finale at Herbst Theatre, Cypress — Cecily Ward and Tom Stone, violins; Ethan Filner, viola; and Jennifer Kloetzel, cello — returned to its roots with two quartets by Beethoven (Op. 18 No. 1 and Op. 135 — the first and last quartets by opus number) and a world premiere by Dan Coleman, who was, in 2000, the first composer featured in the series.

But as a conclusion to “Call & Response,” Coleman’s new quartet — though shaped with vitality by Cypress — was disappointing. Second violinist Stone described him as “one of the country’s greatest living composers,” but it’s unclear just how active a composer Coleman is. Despite being composer-in-residence at the Tucson Symphony Orchestra since 2000, his career is in music publishing, and he took a long hiatus from writing prior to receiving this commission. Coleman’s music has virtually no online presence, and few of his works have been recorded.

Unfolding in episodes, Quartet No. 3, together, as the river, explores the six duet configurations possible within a string quartet. Coleman described the work as a character study of the Cypress Quartet, and the melodic material — rooted in the classical tradition, and highly motivic — is pleasant. But after a promising opening the piece fails to develop, and at 20 minutes long, the structure begins to feel formulaic: A duet plays, a third player enters to form a trio, one of the original players drops out, a new duet ensues. In the preconcert talk Coleman remarked that he feels most comfortable writing string quartets that utilize the instruments in much the same way that Beethoven did — in other words, he doesn’t demand any extended techniques of his players. Ultimately, his Quartet No. 3 didn’t say anything new.

Much more exciting was Cypress’s subtly detailed performance of the Beethoven quartets. Although the opening movement of Op. 18 No. 1 was at times too square, especially from first violinist Ward, the group’s delicate and measured approach was particularly effective in the slow movement. Beethoven wrote this music after the tomb scene of Romeo and Juliet, and Cypress’s simple treatment of the melodic lines perfectly captured the love of these two innocents. Second violinist Stone and violist Filner played their initial accompanying figures with a haunting dryness that set the stage for the contrasting Sturm und Drang of the developmental section, and cellist Kloetzel was greatly expressive throughout the evening. And if the Scherzo of Op. 18 No. 1 lacked humor, the Vivace of Op. 135 was delightfully raucous.

In a recent conversation with Mark MacNamara for SFCV, Kloetzel talked about the group’s struggle to stay relevant in an age when many quartets form their identities through genre specializations: Cypress isn’t a new music group; it’s not period, traditional, or young. “It’s always been a problem: ‘who are they then?’”

But even if it never quite developed its marketing hook, Cypress will be missed for its sensible interpretations and fine ensemble playing, both of which characterized Friday’s concert. The group has done very well for its 20 years, and its recording of the complete Beethoven quartets, due this May, will be a welcome release.