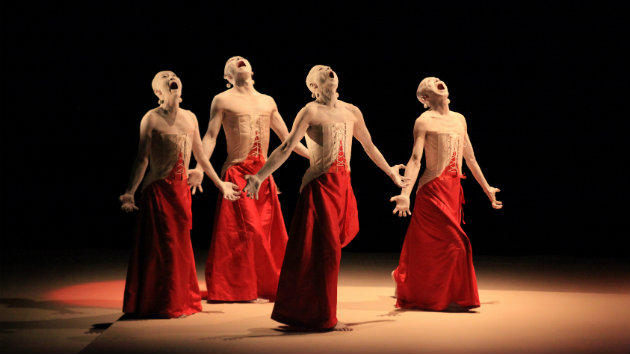 Umusuna (Memories Before History), which the Butoh dance troupe Sankai Juku performed at the Yerba Buena Center for the Arts Theater Oct. 9-11, doesn’t constitute a new wrinkle in the company’s artistry. But it is, perhaps, a deeper one.

Artistic director Ushio Amagatsu, who founded Sankai Juku in 1975 and presides over it from top to bottom, uses his 2012 piece to explore man’s relationship to earth. But the exploration is an extremely concentrated one, and as such, it’s as deeply personal as a depersonalized, white-powdered, bare-chested, white-saronged, bald dancer who looks more like a marble frieze than a creature of flesh and blood, can get.

Although it’s an ensemble work, with Amagatsu joined onstage by a company of six other men, each dancer is in a world of his own. Although their largely glacial movements are often performed with eerie, stunning unison and grace, there is virtually no interpersonal contact – no hand-holding, arm-linking, lifting. Nada.  In its movements, in its reflexive gestures, in each dancer’s total self-composure, Umusuna seems a series of solo meditations and individual technical challenges, its poses and stylings a cross between Tai Chi and early modern dance, with a few detectable balletic flourishes. Not surprisingly, Amagatsu studied modern dance and ballet before becoming a devotee of Butoh, a dance form – some would say a protest art form – that developed in the social upheavals of post-World War II Japan.

This Japan-based company, though, has been spending much time and receiving much acclaim in Europe, especially in Paris, where many of Amagatsu’s dances, including this one, were choreographed. The props, then, are familiar to the Western world, and we’ve seen them before in other Sankai Juku pieces.

There’s sand, for one. This outing, it’s distributed by being shaken from the flies in a steady vertical stream that can be lit in various beautiful ways. The music that accompanies the sand shower – and the entire 90-minute piece – is rich the voices of nature, evoking thunder with its drums, blowing trees and reeds with its wind instruments, and natural tranquility with its gongs. The music’s by Takashi Kako, Yas-Kaz, and Yoichiro Yoshikawa. 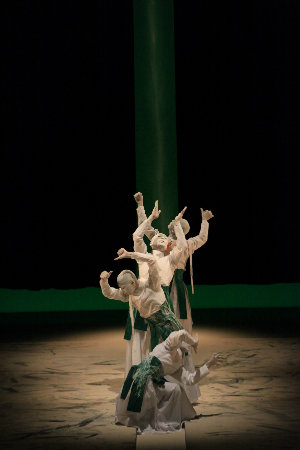 It’s amazing how much sand seems to be up there; it shifts in strength of the stream, but it never stops. The dancers step through it, or they sift it through their hands, or, in one instance, walk up a hillock of it. And there’s more sand, quite visibly the sands of time, pouring from two hourglasses onto a huge scale whose two pans are stage right and stage left. One rises while the other drops, or they’re raised high as a backdrop and reminder of the place, the time, the space in which we exist. Or don’t. From the program notes: “The word ‘umusu’ also embodies the concepts of everything and nothing, existence and nothingness. ‘Na’ evokes the land, the ground/soil and one’s native place.”

The ribbon is also familiar. In other Amagatsu creations, red ribbons emerged from dancers’ mouths; symbols of lifeblood and/or slaughter and death. Here the ribbon, a wide strip, hangs down to the floor from the flies, next to the sand streaming down. It’s a brilliant red at first; later, the ribbon is bright eco-green. Anagetsu gets the zeitgeist; the titles of various of the dance’s seven sections refer to forests, sedimentation, erosion, water, and wind.

Another repeater is the seemingly serious drag-nod to burlesque, as some of the men appear early on laced into corsets, wearing dangly earrings, all with their white garb, white powdered faces and bald heads. Yin and yang? Dang!

So what’s new? Plenty, because the company looks more refined, more concentrated, but more at ease than in its last visit in 2010. We can see the steady implacability and grace of each dancer. We can also get drawn into their grotesqueries, as they dance in ladies’ undies or just stand there with their mouths ajar so we can think about what on earth it might mean. Or a dancer lying on the ground to suggest, perhaps, a seal on the sand, feet lifting together, torso arching upward; because of the seriousness with which the movement is undertaken, there’s a weird, distinctive beauty. All this feeds the power of the closing moments, especially the one when the whole company is ranged on the stage in stillness, like a grouping of marbles from the Parthenon.

Despite the familiar touches, then, Sankai Juku remains a group of surprising and devoted shape-shifters. In any form, they’re welcome visitors.