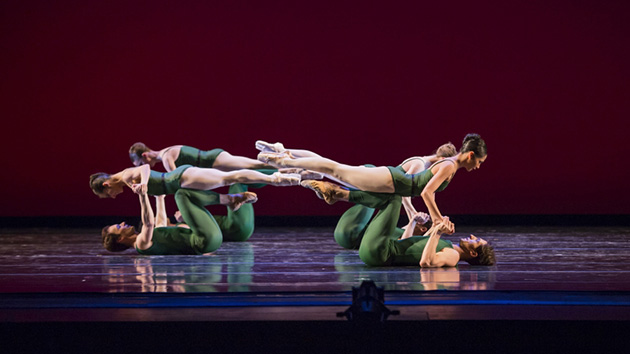 Depending on whose calendar you follow, the Joffrey Ballet is either 60 (in years since its founding) or 20 (the years it’s been based in Chicago). In either case, the company’s ultimate resilience as well as its growth in virtuosity is cause for celebration, and celebrate the happy audience at Zellerbach did.

Reflecting that history and the eclecticism that’s part of the company’s tradition, Artistic Director Ashley Wheater brought only new or recent works for this year’s visit to Cal Performances at UC Berkeley. Since there are so few companies with its breadth of superbly presented repertory, this was a mixed blessing. I suppose we can live – briefly – without The Green Table, but any time they want to bring it again, they’re welcome to.

For the nonce, the program consisted of three leotard-ish neoclassical ballets and one piece of postmodern, Eurofunk origin, created by Swedish-born Alexander Ekman, 31, the Nederlands Dans Theater’s assistant director, in 2011. His Episode 31 was supposed to be multimedia, with a film behind it embodying the message that folks can dance anywhere. However, the postmodern electronics failed and there was no movie. No matter.

It might have had something to do with the shifting score, by Mikael Karlsson, Ane Brun and, with an excerpt from Les Trois Gymnopedies, Erik Satie. Or with Luke Simcock’s variegated black and white costumes, some with skirts (for the guys, too), some with pants, shorts, garters, ties, white shirts, and heavy shoes (eventually discarded). Or it might have been the intensely anarchic aura that perfused Ekman’s choreography.

Not that there was anything fogeyish about the rest of the show. It began with Val Caniparoli’s Incantations (2012), set to music by Alexandre Rabinovitch-Barakovsky. Sandra Woodall’s décor, big, spiraled lighting fixtures with spiral-decorated leotards to keep the theme going, reinforced the ballet’s frisky, swirling mood. Couples – there were five -- zipped through hip swivels as a piano and later a celeste rang out arpeggios. Arms and torsos kept the circles going, faster, tighter, wider.

For the men, there were huge leaps and fabulous tours jetés as well as beating backward jetés, which looked uncharacteristically clumsy. From Dara Holmes, partnered by Ogulcan Borova, there were beautiful, warp-speed chainé turns. And elegantly continuing the swirling theme, April Daly, partnered by Temur Suluashvili, somersaulted, twisted, and moved her impossibly supple legs into improbably graceful poses. The whole thing gathered momentum and until the surprise of that lovely, almost prayerful, Satie sequence.

Stanton Welch’s Son of Chamber Symphony, set to John Adams, was a proudly postmodern take on the iconography of classical ballet. You couldn’t really pick a better combination of choreographer and composer for such an exercise. The plangent rattling and offsetting sweetness were like a frolic under a waterfall -- or maybe in a swan lake. The ballerinas in Travis Halsey’s stylized platter-like tutus, melted sneakily into and out of classical tradition, striking perfect Odile-like poses in their princely partners’ arms. It is, after all, Stanton Welch who’s in charge, softening a mechanical-looking bourrée and a rigid pause into something supple and feathery that ends in a perfect arabesque, or supplanting shivery hands with gracefully extended fingers.

Yuri Possokhov’s charming pas de deux excerpt from Bells, (2011) set to Sergei Rachmaninov, is on a complicated and eternal theme, the pain of being alone versus the pain of being with one’s lover. Possokhov further complicates matters, beautifully, with stunning overhead lifts, big jumps, and moments of tranquility, all finally, humorously sealed with a kiss. The ultimately happy couple was Victoria Jaiani and Temur Suluashvili.