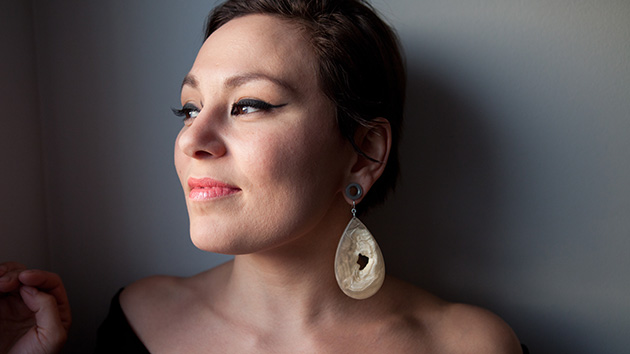 Minutes before offering a dizzying and mesmerizing performance of Nanook of the North at UC Davis’ Mondavi Center last Friday, Inuit throat singer Tanya Tagaq brought her cousin on to the stage. She thought it would be easier to show what throat singing is rather than telling the audience about it.

Tagaq and her cousin, Selena, held each other close at the hip, like lovers, and began to sing. The sound was a blend of soprano and guttural vocalism. Overtones intermingled as if a third singer were present. The moment was sensual but innocent and lasted a very intense minute.

The power and exotic nature of what these two women sang was a sign of what was to come in the intimate confines of Mondavi's Vanderhoef Studio Theatre.

The 37-year-old Tagaq is well-known in her native Canada. She gained worldwide attention after touring with Björk in 2000, and won Canada's 2014 Polaris Music Prize for her fourth album, Animism. She recently has collaborated with the Kronos Quartet.

The performance saw Tagaq, violinist Jesse Zumot, and percussionist Jean Martin – also highly regarded in their native Canada -- offer their musical score to Robert Flaherty’s landmark 1922 documentary Nanook of the North, which chronicles the challenges and joys faced by a Hudson Bay Inuit family led by the charismatic hunter Nanook.

In her hands, the film played out less like an ethnographic study and more like a portal into what it means to live in an unforgiving land. Tagaq's singing of this new score was fraught with physical urgency. She sang most of the evening with her eyes closed, her body gyrating one moment and bent over in a cry the next. She made use of her fingers, like a North Indian dancer, as part of her singing with Flaherty's black and white images playing over two screens above the stage.

Percussionist Martin set the rhythm while Zumot offered chilling notes and other effects on the violin. These two musicians proved deft at creating a mood to match the visuals.

One of the key moments in the documentary is a sequence where Nanook and other members of his tribe set out to capture a walrus with a harpoon. (The sequence is notorious in documentary film because Flaherty manufactured it. By the time Flaherty had made it up to Hudson Bay, the Inuits were no longer hunting walrus.) It was a dangerous endeavor, and other forms of hunting were easier.

During this sequence, Tagaq's throat singing went from brooding to a chilling, harrowing cry. This mirrored the danger of hunting these powerful animals, and an evocation of the majestic walrus being hunted.

Much of the documentary chronicles the hunt for food. Hunger is still no small matter in this landscape. (Nanook died of starvation years later.) Tagaq conveyed this sense of danger in singing that reached low dark notes and then rose to a higher pitch that can best be described as primal screaming.

In the “light-hearted” moments in the original documentary, such as when Nanook encounters a Victrola phonograph for the first time, Tagaq contradicted the mood, as a commentary. There were also poignant and poetic moments in Tagaq’s singing, especially in scenes where Nanook and his family interacted inside an igloo.

The performance was a rare opportunity to experience a classic ethnographic film from the eyes of those who were the subjects. In Tagaq's hands, it was as a revelation. It is hard to imagine anyone who saw this performance would see Nanook of the North in the same way ever again.