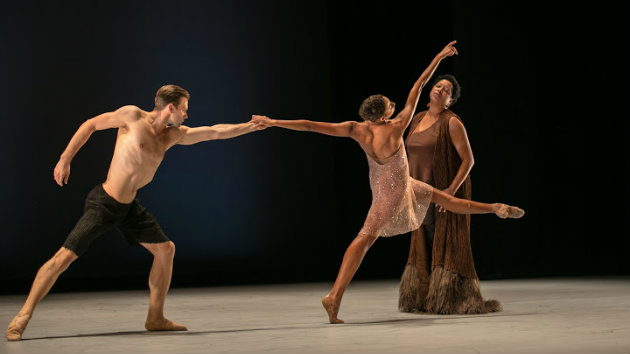 Having earned her fame as a backup singer, Lisa Fischer was front and center on Friday, Nov. 6, as Alonzo King LINES Ballet opened its fall season at Yerba Buena Center for the Arts Theater. Fischer, who was one of the Marvelettes when she was hired to sing with Luther Vandross, went on to tour with the Rolling Stones, Tina Turner, Sting, Chaka Khan, Chris Botti, and on and on. With her prodigious range, power, and theatrical sensibility, accompanied by a rare sensitivity, Fischer beautifully illuminates King’s The Propelled Heart, a world premiere.

Fischer worked with composer and arranger JC Maillard; sections of the dance, which has 16 scenes, are set to music of others, but most of the music comes from them.

In The Propelled Heart, King’s vision is a wonderfully rich totality whose integrity is reinforced by the music, particularly when delivered by Fischer. Throughout its taxing requirements, the Lines dancers attain – if it isn’t too trivializing to say so – rock star status.

The piece is about love in many permutations – between people, in nature, in the spiritual sense, on behalf of a cause, as expressed through spirituals. The aspects of love find expression in multiple vocabularies. This outing, though there isn’t any pointework as has often been the case, the female dancers’ style varies from richly balletic, with space-gobbling leaps and gorgeous extensions of the leg, to the more flexed, sometimes involuted stylings of modern dance, in all its international influences. The men’s exuberance, even explosiveness, and their quiet strength draws from the same schools, and their partnering is stunning. Here the men and the women are displayed and show off each other with equal poise and generosity. King’s gift is his seamlessness; there are no jarring shifts in his choreographic conversation.

Deliberate startles, then, are largely the provenance of Fischer. Her range appears to be endless, from a growl to a shriek, but each couched in impeccable musicality. Often, with that stately presence, it’s as if she’s asking the audience to pay close attention. It works. Garbed in loose robes, she seems at times a griot or a guru and at others a mother figure. 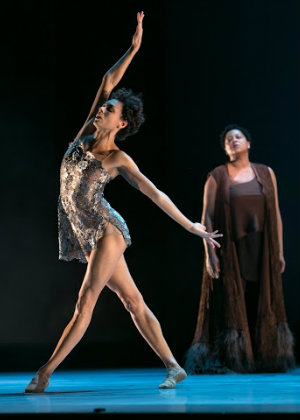 The piece opens with an Edenic scene, and the dancers arrive quietly. Fischer’s voice triggers a sense of urgency and propulsion (hence, perhaps, the title), and those legs are firing on all cylinders. The dancers’ movements suggest they’re still in the process of finding themselves as humans; soon, we’ll move on to the animal world, the cries of birds, the behavior of primates, crouched and scuttling, picking at each others’ heads. As occurs frequently, after such bravura group work, there’s a scene where each dancer is illuminated, moving, still, or transitioning from one to the other. Each dancer is joined by all the others, and each is distinct. It’s an onstage family or a general humanity; the interval offers a moment of contemplation and appreciation. Here the dancers, too, have an opportunity to vocalize, sometimes in call-and-response echoing Fischer, sometimes supplying other sounds, like a group whistle, moving all the while. It has to be even more taxing on the body than dance alone, but the company makes it feel effortless. The human journey continues, with expressions of intimacy and anguish and everything in between; maybe it just feels like everything because each moment is so richly expressive.

Robert Rosenwasser’s costume designs — neutrals sometimes sprinkled with sparkles — and Axel Morgenthaler’s overhead, fog-diffused, lighting were terrific. Together they created a contemplative space for devotion that served equally well for flights of ecstasy. Ecstasy there was; the piece had a transcendent quality that King’s work seems often to reach for. Here he has richly succeeded.

You’ll want to catch this one. Performances continue through Nov. 15.