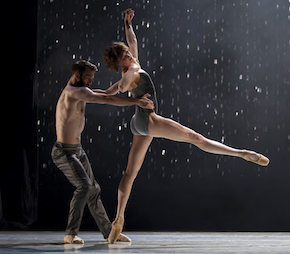 Alonzo King Lines Ballet, founded in 1982, is throwing itself an elegant if late 30th-anniversary celebration. Central to the festivities is a collaboration with composer and double-bass virtuoso Edgar Meyer, titled, of all things, Meyer. This may be because Meyer, when not delighting from the sidelines with his trio (the other two players are violinist Robert Moose and cellist Gabriel Cabezas), stands right onstage. His workaday street clothes (blue shirt, brown pants) look out of place next to the clingy metallic dresses of the ballerinas and the soft slacks and bare chests of the men dancers, as well as Jim Doyle’s backdrop of golden waterfalls. Meyer’s standing there to play, jazz style, as if he’s next to a dance floor. Well, he is, but this is Yerba Buena’s Lam Research Theater, not a club. It’s a strange derangement not atypical of King’s work, which is usually interesting and often stunning. King obviously likes to throw in peculiarities like this.

Meyer is in seven, or as the program would have it, VII movements. V is titled Cards. Meredith Webster and David Harvey are dancing together, and there are all these white cards that Harvey sends flying around. They’re scattered, and gathered up, and re-thrown, and recollected and … it appears meaningless. It could stand for our contemporary outpouring of information and conjecture, which seemed particularly relevant Friday night in light of the week’s events in Boston. 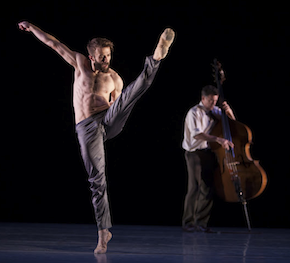 At one point Meyer departs the stage to play piano, leaving his double bass jutting from the wings like an unfinished thought, before returning to it and hauling it back across the stage to reunite with the other musicians, his trajectory paralleling that of a dancing couple. As we say in the well-wrought vocabulary of dance criticism, it’s just strange. There’s nothing strange about Meyer’s composition, though. It is by turns suave, lively and danceably lovely, as much in the violin and cello parts as in Meyer’s own. He shares generously. The décor triumvirate of Doyle, lighting designer Axel Morgenthaler and Robert Rosenwasser made the piece glow.

Meyer is chock-full of stunning moments, but feels a little static. The slew of images, balances, poses, and gestures rarely collects itself into phrases or sentences of movement. That’s the opposite of King’s 1994 Ocean, or at least to its finale, which was part of the first half of the program, a collection of excerpts from the repertoire.

Amazingly, Ocean has never been seen before in San Francisco. Set to the music of El Hamideen and Pharaoh Sanders, it shows off every glorious yard of the dancers’ extremities. It’s deeply illustrative of King’s understanding of pointwork and partnering. It is vivacious, yet poetic; there was one pause, where a line of men, in profile, simply moved their arms in a wavelike curl. With Courtney Henry, the company’s tallest and most stunning ballerina, leading the surge, the troupe’s dynamism almost literally pulled the audience to its feet at the curtain call. It would be lovely to explore Ocean in depth someday.