Few rock concerts are as eventful as the Wagner-Mozart-Bach presentation at Festival del Sole last Thursday turned out to be. The news included the disruptive effects of a Presidental visit and roadblock, a serious injury to the conductor/violinist the day before the concert, and a near-catastrophic memory lapse by the pianist. And yet, the memory that will stay with me in the long run will be the searing experience of a superb performance of Bach's Goldberg Variations — fresh and real and moving, as if heard for the first time. 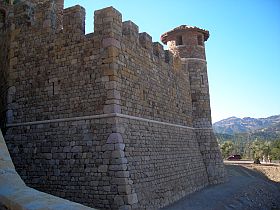 Castello: a unique concert venue in the Wine Country

There is wisdom in the inscription on the title page of the 1741 Bach manuscript: "Composed for music lovers to refresh their spirit."

In the faux-medieval courtyard of the imaginatively (if ungrammatically) named Castello di Amorosa, under the azure-blue Napa sky filled with a dozen flittering and chattering starlings, something wonderful happened in the second half of the concert. Dmitry Sitkovetsky's violin quietly sang the stately, soulful Saraband Aria opening the Goldberg Variations; the young, supremely talented string players of the UBS Verbier Festival Chamber Orchestra joined in as a chorus of hushed voices, and there came an hour of sustained magic that few concertgoers have a chance to experience. 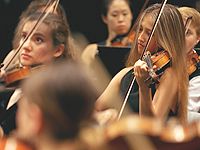 But first, there were hurdles to overcome before the music began (and a serious obstacle even after that). The President's inspection tour of fire-ravaged California included a political fund-raising sidetrip to St. Helena, the town located just before the entrance to the castle. And so, the single-access Highway 29 was closed for almost an hour by the Bush motorcade, stranding one and all, delaying the concert, and fraying nerves.

On Wednesday afternoon, however, a far more serious preconcert drama occurred. As the Festival's public relations director, Mona Baroudi reported the next morning:
Dmitry [Sitkovetsky] was driving a golf cart [a green mode of transportation in Napa], lost control on his way down a steep hill, the cart flipped over and fell on his foot. He had a huge gouge on his right ankle (which got stitched up) and fractured his left ankle. Both legs are bandaged from ankle to knee. On top of it, he tore the ligament from his collarbone to shoulder, and his shoulder keeps popping out. He spent eight hours in the emergency room in Napa. He is in a lot of pain. But the show must go on, and Dmitry wants to play and conduct tonight, and will do so with a halter around his arm. 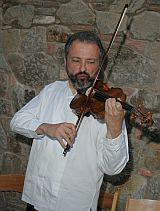 Sitkovetsky, looking none the worse for wear

When Sitkovetsky appeared on stage for the first time (to a standing ovation for bravery skirting foolishness), he showed no sign of the injuries other than slow, careful walk. He stood to conduct the program-opener, Wagner's Siegfried Idyll, and used more small forward-thrusting motions than round, sweeping motions. His mobility was obviously compromised — and yet, his conducting was hale, hardy, and wholesome. Perhaps Sitkovetsky was taking a page from Voltaire, who once said, "The art of medicine consists of keeping the patient amused while nature heals the disease,” music being the violinist's medicinal amusement. At any rate, the recovery appears both instant and complete.

Wagner wrote the Idyll for the birth of his son in 1869, and the Castello performance was dedicated to the birth (four months ago) of a child to Festival Founder/Director Barrett Wissman and cellist Nina Kotova, former Festival artistic co-director.

The Verbier Orchestra got the sound right from the first note: a simple, dreamy, "innocent" way of playing Wagner. Under Sitkovetsky's direction, tempi and balances were sustained beautifully. A couple of transitions slowed down a tad excessively, but when the ultraromantic theme (from Siegfried's love scene) rolled around, it was all rapture and abandoned bliss. During the ecstatic recapitulation of the theme, Sitkovetsky and the orchestra — playing as a single entity — brought out something extra I have heard only rarely in the past: the "beyond-Wagnerian" sound of Schoenberg of the Gurrelieder period, carried excess beyond excess to a place of no return. (Only, in Schoenberg's own case, to an entirely different, "not-so-pleasant" domain.) 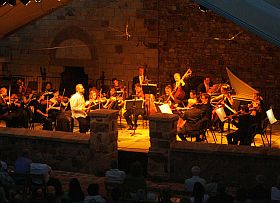 Sitkovetsky, on the left, playing and conducting Variations

The best-known Mozart Piano Concerto, No. 23 in A Major, followed. It has been heard on dozens of film (and BBC TV drama) soundtracks, and was therefore completely transparent to the majority of the audience. But even if the music were not so familiar, what happened to the soloist in the concluding Allegro assai would have been painfully obvious. In the event, a memory lapse and ensuing confusion was all the more dramatic.

Simone Dinnerstein did well in the first two movements of the Mozart, and offered a straightforward performance, restrained to a fault. More "pearly notes" would have been welcome, a warmer tone, a singing legato — but at the core, it was fine, and Sitkovetsky's orchestra was once again exceptional.

Soon after the third movement began, Dinnerstein's tempo slowed down. Sitkovetsky tried to match it, but in a few seconds the soloist completely lost her place, in a scene witnessed only in dramatic musical films depicting a crisis-struck concert. Dinnerstein picked up a phrase further ahead in the score. The orchestra — looking and sounding confused — once again tried to adjust to her. But in the end, soloist and orchestra rushed to simply end the concerto, instead of even approximating the work's joyously unrestrained finale.

It was an unfortunate happening — making you wonder why such events don't happen more often — and in hindsight, the conductor or the soloist should have stopped, apologized, and started the movement again. 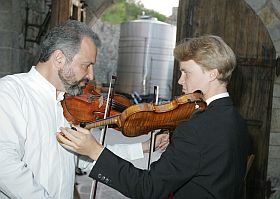 With this drama on top of Sitkovetsky's medical condition, what chance did poor Bach have with the lengthy, mighty Variations due after the intermission? Miraculously, the violinist played and conducted his orchestration of the work in absolutely peak form, brilliantly and from the heart, and his instrument blended superbly with the young musicians' string orchestra. Orchestration and performance were so affecting that I caught myself wondering why I had not heard this "original version" before, as the keyboard version is obviously inferior. (Imagine a half-Smiley here, as the actual use of emoticons is against editorial policy.)

Torn ligaments, mangled legs (Sitkovetsky did sit for the Bach), shoulder taped in to prevent popping out again — none of that was evident as uncanny strength, ability, and dedication produced this remarkable performance.

Similar to the work's dual nature, both individual pieces and a sum greater than its parts, the Verbier musicians shone equally in the ensemble performances of the nine energetic canons and in the quiet, contemplative duos and trios. A recognizable standout was the concertmaster, 21-year-old Christoph Koncz, an Austrian who has just been engaged as principal second violinist with the Vienna Philharmonic. His duets with Sitkovetsky were utterly beautiful.

Christoph Koncz, in a recent photo

Every Verbier principal should be singled out as well, but because the orchestra's personnel are listed alphabetically in the program, performers remain semianonymous, perhaps deliberately, to first-time listeners. Besides the Austrian Koncz, American violist Dustin Budish and Italian cellist Nerina Mancini dazzled with their solo work. (Mancini, identified in the program as being from Italy, is said to have grown up in the East Bay, soloed with the Prometheus Symphony, lived in Berkeley.)

The Chamber Orchestra not only consists of young musicians, but it is of a tender age itself. Formed in 2005, of players and alumni from the Verbier Festival Orchestra, the group has 34 musicians, 11 from the U.S. (an unusually high number for a European orchestra), and the rest from all over the map, from Japan, Egypt, Taiwan, Uzbekistan, and so on. In just three years, the Chamber Orchestra has toured many European locations, New York, Chicago, and elsewhere. Besides Verbier, they are on the way to Italy's Cortona Festival, and then a tour of Asia.

In age, excellence, and multinationalism, this is a group similar to the (numerically much larger) Gustav Mahler Jugendorchestre, one of the most exciting musical forces in the world. 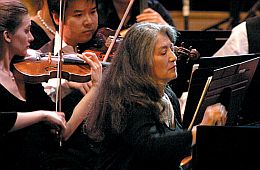 The Chamber Orchestra, with Martha Argerich