The accordion, Renaissance motets, and Samuel Beckett — it’s an improbable festival that brings these things together — but then, György Ligeti’s interests were unusually eclectic. The composer, who died in 2006, earned popular recognition through the films of Stanley Kubrick, yet he never stopped searching for new sounds.

A figure this omnivorous formed the basis for a rich inaugural season of Bard Music West, the younger sibling of the Bard Music Festival that features a different composer each year. The West Coast twist? While New York’s audiences will hear Chopin and Rimsky-Korsakov in the coming seasons, San Francisco’s will feature composers from the 20th century or later.

In addition to performing eight of Ligeti’s own works spanning from the early ’50s to the ’90s, the festival musicians explored the composer’s influences and enduring legacy in three programs at the Noe Valley Ministry that reached backward and forward in musical time. Friday’s concert highlighted Ligeti’s roots, and featured some of his earliest works, including the Sonata for Solo Cello and excerpts from the suite Musica ricercata. Pianist Allegra Chapman, the festival’s co-founder and artistic/executive director, was particularly exciting in the Allegro con spirito’s cheerful major-minor harmonies and uneven dance rhythms of the Energico movement.

However, the lengthy program spent too much time on Balkan songs (played aptly enough by the New Moon Trio) and on Songs from the Diaspora by Roberto Sierra, one of Ligeti’s most famous pupils. Most of these songs inhabit the same neoromantic, colorful sound-world, and though soprano Boya Wei delivered the 15th-century Sephardic texts with beautiful expression, one or two movements would have had the same effect as the full seven. It thus felt especially unfair that Chapman’s performance of the Ricercata — whose melodic material expands with each subsequent movement — had been truncated.

The evening’s most substantial work, Bartók’s String Quartet No. 2, lacked point of view. Though the more musically straightforward second movement came off well (and its hair-raising Prestissimo was wonderfully quiet), it was as if the outer movements were performed by four good players — and not a quartet. Especially in the first movement, important lines didn’t surface and phrases ended with little care, making this performance feel more generic than committed. 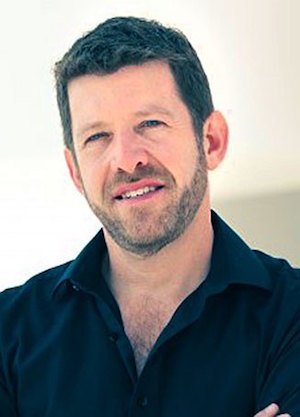 If Friday’s experience wasn’t particularly fulfilling, however, Saturday was like a different festival. The great performances began in the afternoon program, on the theatrical and absurd, with the premiere of a fabulous new production: Samuel Beckett’s mime play Act Without Words I, scored for solo clarinet by Montreal-based composer Luna Pearl Woolf and directed by West Edge Opera’s Mark Streshinsky.

In Beckett’s work, a man finds himself stranded in the desert, flung backward by invisible forces each time he tries to leave. Streshinsky’s starkly minimal setting swaps the desert for a metal frame swathed in several layers of plastic wrap: a prison invisible to the man (Michael Mohammed), and one that allows the audience to see into the action. Outside, the Technician (Kate McKinney) perches on a ladder, ready with a fishing rod to dangle various objects into the space, and clarinetist Renata Rakova stands below.

An outburst rouses the sleeping man. Subsequently, and throughout the play, Rakova points her instrument toward the objects being introduced — scissors, rope, and, most tantalizingly, a water bottle — as if to help the man notice them (though the objects ultimately provide only frustration). In fact, Woolf’s illustrative music here, as does her 2013 silent film score Suspense, skillfully augments the performers’ movements. Short motivic bursts illustrate the sudden actions of the man falling off a box and throwing himself against a wall, for example — but when he cradles the length of rope, contemplating the sweetness of death, Woolf trades terse gestures for long, legato tones. 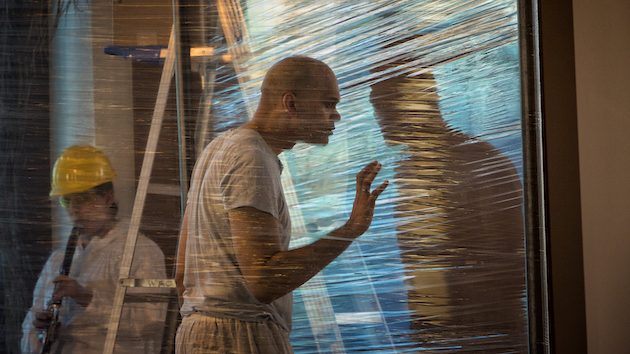 Streshinsky’s production also charms with its purely physical touches. Mohammed bobs after the water bottle, trying to position his mouth at the spout; after it’s cruelly jerked upward, his whole body, down to his expressively wiggling fingers, grows long. These dance-like motions are full of grace, but there’s also humor: at various points, Mohammed impishly mimics Rodin’s The Thinker and flips off the clarinetist. Moments after he throws himself against the invisible wall, the despairing motion of his body’s slackening is undermined in seriousness by the unmistakable pop of his unsticking from the plastic. The ever-present fishing rod is a choice piece of imagery: the audience isn’t sure whether the man is being terminally held, or if it’s merely catch-and-release. 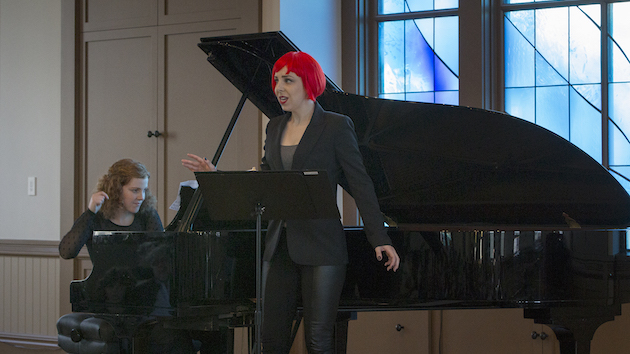 Nearly as theatrical were the concert excerpts from Ligeti’s 1978 opera Le grand macabre. With Chapman on piano, Soprano Sara LeMesh sang the arias of the Chief of Police from the absurdist story about an evil despot who becomes too drunk to carry out his destructive plans. I don’t know the opera and, with no libretto in the program, was disoriented — facts I’d be embarrassed to admit, were it not for the strong testament to LeMesh’s dramatic power that my ignorance creates! She was outstanding: her theatrical timing, tone, and technical control, especially in the highest register, made the music lucid. If this performance is representative, she’d be the star of any cast. 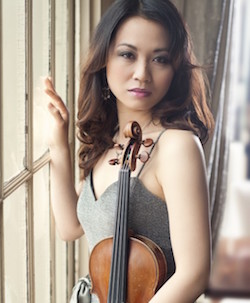 Saturday’s instrumental soloists were as strong. Luosha Fang completely characterized each of the six movements of Ligeti’s Sonata for Solo Viola, from the lyrical “Hora lungǎ,” with its quarter-tones and natural harmonics high on the C string, to the final “Chaconne chromatique,” whose angst-ridden harmonies she balanced with graceful lilt.

From the first notes of the three piano etudes she played, it was clear that Lucille Chung is a special artist. Her technique is fabulous: performed with ceaseless momentum and superhuman clarity, the never-ending series of ascending lines in “The Devil’s Staircase” felt deliciously diabolical. But in the drifting Debussyan harmonies of “Rainbow” — and later, in Terry Riley’s Keyboard Study No. 2 — Chung became a virtuoso of gentleness: her perfect technique was still obvious, but transformed into an unassuming backdrop for music timeless in feel.

The final program, in fact, foregrounded the scope Ligeti’s influences in time — from the still-contemporary Riley (and a Riley-esque piece by Ligeti’s son, Lukas) extending back to 15th-century choral music. Singing motets by the Franco-Flemish composer Johannes Ockeghem, Volti’s performance was so balanced and pure that I wished I was attending The World of Ockeghem, if only so that they could have sung more. Luckily, the chorus returned at the evening’s close for a hypnotic performance of Ligeti’s slowly unfolding Lux aeterna — a transcendent end to the festival.