War, violence, revenge, and parent-child relationships are evergreen subjects found at the heart of important operas from the earliest days of the form. Adriana Mater, the luminous, intimate, disturbing opera from composer Kaija Saariaho and librettist Amin Maalouf, treats these subjects with greater subtlety, complexity, and maturity than almost any other opera.
Adriana, which received its American premiere Saturday at Santa Fe Opera, is set in a nameless country soon to be at war. The characters' names, and the national situation described obliquely in the libretto, suggest an Eastern European country, but George Tsypin's beautiful set clearly alludes to Jerusalem's Dome of the Rock. Perhaps Adriana takes place in the former Yugoslavia at the time of the Bosnian war, or perhaps the set is meant to remind us of the ongoing struggles in the Middle East. In any event, the libretto, in French, deals with universal, timeless issues, and with few changes Adriana could easily be set in many different times and places. 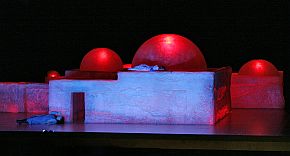 Pia Freund as Refka and Monica Groop as Adriana

A brief description of Adriana Mater's plot sounds uncomplicated: Adriana, a young woman in a nameless country soon to be at war, is raped by a fellow villager, Tsargo. She becomes pregnant as a result and gives birth to a son, Yonas. She raises him to think his father was a war hero who died defending the family. At 17, Yonas discovers the truth, and swears to kill his father, the rapist, if they ever meet. Tsargo returns to their town after a long absence. Yonas confronts and tries to kill him and is unable to do so.
Going Deeper
It is the details beyond the surface that give Adriana Mater its unusual depth and power. Early in the opera, when the drunken Tsargo attempts to flirt with Adriana, her responses make it clear that he might have had a chance with her if he weren't a drunk, if he weren't a child in a man's body. She firmly sends him away, only to be upbraided by her sister Rekfa for even talking to him. The opera's feminist orientation emerges in Adriana's response: "No, Refka, what you describe is not contempt ... It's the fear women have been taught to feel since Eve ... I don't want to keep quiet or lower my eyes."

Adriana is very much about the effects of war and male power on women. It's only after war breaks out that Tsargo, gun in hand, becomes a real threat. One day he appears at the sisters' house, having joined a militia so that he can fight "the others" — those who will kill "us," out of vengeance, and make the survivors "speak like them, dress like them." He demands to be allowed on the roof, where he can watch for "the others." Adriana refuses, and Tsargo finally forces his way into the house. In the guise of a defender, he rapes Adriana. We don't see what happens, but the music conveys the action quite clearly.

This violent and disturbing scene is straight out of Against Our Will, Susan Brownmiller's pioneering book on how men use rape and the threat of rape to control women. True to life, Tsargo is a neighbor, a man supposedly on the same side as Adriana in the conflict, not a stranger. 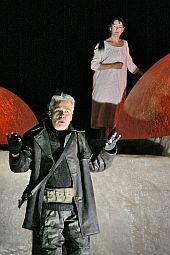 Adriana follows the effects of the violence into the next generation. Yonas' impulsive, furious desire to take revenge is typical of a teenager, and has many operatic predecessors, including Don Carlo di Vargas' years-long vendetta against Don Alvaro in La forza del destino, and Donna Anna and Don Ottavio's pursuit of Don Giovanni in the eponymous opera.

But how many operatic characters pull back from the brink, unable to kill the object of their vengeance? How many operas consider the soul-destroying impact of revenge on those who seek it? After failing to kill the blinded Tsargo, Yonas thinks he has lost his courage, and begs Adriana's forgiveness for his "betrayal." Adriana has wondered all his life whether Yonas would be capable of killing, and she replies, "That man deserved to die/But you, my son, did not deserve to kill him." This is not a conventional happy ending, but it is an ending in which Adriana and Yonas begin a journey away from the dark past. 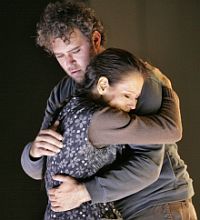 Changing Beats
At the beginning of her career, Kaija Saariaho was reluctant to speak about the subject of women and musical composition. But as she has become one of the world's most honored and sought-after composers, she has become more willing to discuss her experiences as a woman composer — and as a woman.

At a symposium held on the day of the premiere, Saariaho recounted the earliest origins of Adriana Mater, which can hardly be imagined before the present time. Some years ago, the composer, feeling out of sorts, visited her doctor, who performed a sonogram, and, pointing to a fluttering image on the screen, asked Saariaho if she knew what the fluttering was. She did not and, to her astonishment, the doctor told her, "That is your baby's heartbeat." The composer had no idea that she was expecting a child.

Over the course of her pregnancy, she was constantly aware of the child's heart beating near hers, and of the changing tempo of the child's heartbeat as the pregnancy progressed, from the initial flutter to a slower, more measured tempo. The memory of these changes stayed with her, and when the opportunity arose for Saariaho and Maalouf to collaborate on a new opera, the composer wanted to write about motherhood and about the questions pregnant women ask themselves: What will my child be like? How will my child resemble me and the child's father? 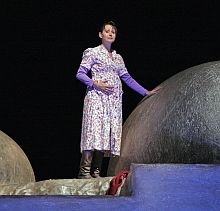 Maalouf, raised in Lebanon, brought his personal history to the project, as well, because of his direct experience of the kind of violence found in the libretto. He and his family left for France, where they still live, when the Lebanese civil war broke out in the mid-1970s. And his libretto incorporates Saariaho's experience quite directly, when Adriana sings, "I only feel, and I feel a heart/A second heart beating close to mine./Who is this stranger inhabiting me? ... I'll still be wondering, as I'm wondering now/As I wonder every moment, day and night/Who is this creature I carry?/Who is this creature I feed?" The libretto is a masterpiece: tightly knit, allusive, with deep internal connections.
Music From the Body
An elusive quality in Saariaho's music makes it difficult to describe in concrete terms. In Adriana Mater, her vertical orchestration is enormously detailed and beautiful, with many unusual combinations of instruments. The strings and winds are deployed to express texture more than melody. Harmonies shift slowly and subtly within a wash of tone, with melodies or individual instruments arising from the mass of sound. Sometimes a solo wind or brass instrument will directly pick up a note from a singer and continue the phrase after the singing stops.

Adriana's chorus, singing from the pit, becomes part of the orchestra, commenting on the action wordlessly or with words. Anxious motives arise from the orchestra and recur obsessively throughout the piece, such as the falling semitone heard in many different orchestrations. Instrumental solos can shock the listener.

With all its complexity, this score must be difficult to lead, and the Spanish conductor Ernest Martinez Izquierdo does a marvelous job of balancing and blending all the elements, bringing out both the beauty and the harshness.

During the Adriana symposium, Saariaho stated that the music itself was influenced by her experience of pregnancy. Her compositional methods for the opera included assigning individual tempos to each character that change from the first to the second act. She related this technique specifically to her unborn child's changing heartbeat.

While the tempo differences won't be audible to everyone, it's clear that Saariaho also gave each character an individual melodic style. Adriana, a mezzo role, sings in long, often sinuous phrases, as in the beautiful and nostalgic aria that opens the opera. Her sister Refka, a soprano, sings in shorter phrases with shorter note values, giving her music a more hectoring, insistent profile. The tenor Yonas' lines are set extremely high, shaped to make you think his voice is about to break, as a young man's might under such emotional pressure. Tsargo rumbles threateningly in the range of Wagner's more villainous bass roles.
Superlative Performances
Adriana Mater has great musical and moral depth and breadth, achieving all of this with four characters brought into the most intimate contact, in a series of solos and duets. The singers each give superb performances, with rock-solid vocal performances and remarkably detailed, wholly natural acting. All were equipped with microphones, and their voices were sometimes slightly transformed or altered to obtain particular effects. The singers aren't native French speakers, and their French could have been better, but in context this seems a quibble.

The Finnish mezzo-soprano Monica Groop, singing Adriana, has a beautiful, clarinet-toned voice that is dark, focused, and capable of expressing rage, love, tenderness, and scorn. Groop sustains her musical and dramatic concentration brilliantly, especially considering the role's length, complexity, and difficulty. Soprano Pia Freund, also a Finn, sings Refka with guts and brilliant tone, and succeeds in keeping sympathetic a role that could easily be one-dimensional and shrewish. 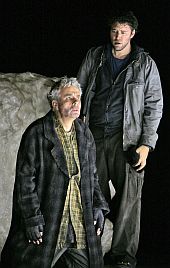 The male side of the opera is equally well-served. Matthew Best's cavernous bass suits Tsargo well, whether in his drunken, threatening, or pitiful state. And though Tsargo is called a monster, and his behavior is monstrous indeed, Best also conveys his humanity. Joseph Kaiser's brilliant, passionate tenor is a fine match for Yonas, and Kaiser moves with the awkwardness of an angry teenage boy.

Beyond the greatness of the music and libretto, much of the credit for the stunning execution must go to director Peter Sellars, to whom the opera is dedicated. I've seen enough of his work to know that the words "subtle," "intimate," and "natural" can't always be applied to his productions — but Adriana is directed with the best kind of modesty, to the point that Sellars himself is simply invisible, while his work is entirely visible. In this he's greatly aided by the beauty of George Tsypin's set and the brilliant lighting design of James Ingalls.