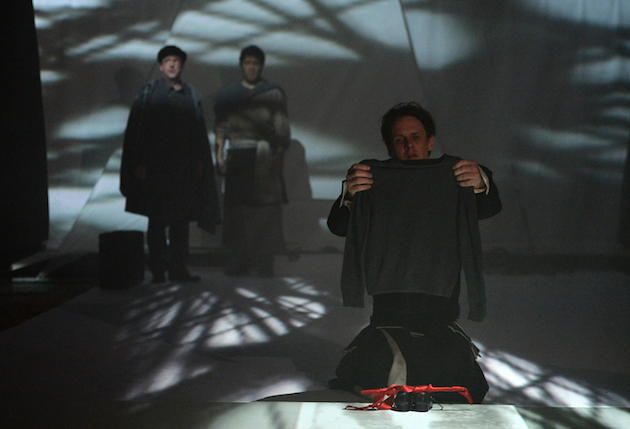 Benjamin Britten's Curlew River, a comparative rarity in that composer's catalog, came to Berkeley this week, as Cal Performances presented two performances of an acclaimed production that originated in London and is now touring the United States. Despite a virtually flawless performance by both singers and chamber orchestra, at the first performance it nonetheless failed to move this reviewer, and elicited a lukewarm response from the audience as a whole.

Curlew River resembles an opera, but Britten called it a parable for church performance. Composed some years after the composer visited Japan, it's based on the Noh play Sumidagawa (Sumida River) and draws extensively conventions of Noh theater.

Curlew River's libretto follows Sumidagawa closely, telling the story of a noblewoman driven mad with grief over the abduction of her young son. Wandering aimlessly in search of him, she comes to the banks of a river. A ferryman hesitates to take her on his boat, but a traveler persuades him to ferry her across the river. There, she discovers that a child who died near the river a year previously, abandoned by his abductor, was her son.

Britten and librettist William Plomer took this story and placed it within a Christian context, incorporating plainchant and using a chorus of monks as both a framing device and a Greek chorus. In their version of the story, the child acquires the attributes of a saint, and a miracle occurs when the Madwoman approaches his grave. They transferred the location to the medieval English fen country and specified a performing style as ritualized and stylized as that of Noh. The performers are to wear masks, as in Noh, and their very gestures and physical positions on stage are strictly defined in a booklet that accompanies the score. As in Noh, all performers are men.

Curlew River's ritualized music and performance style place it well outside the bounds of conventional opera, but for this production, director and designer Netia Jones has largely abandoned the Noh-like aspects of the libretto, a common strategy for stagings of this piece. The performers move naturally, and they don't wear masks. However, the framing device of the monks' entrance and exit, and their transformation into a chorus of travelers, retains some of the work's ritual character. The spare production and stark lighting create a sense of being within a sacred space, and apparently Zellerbach Hall had been lightly perfumed with incense prior to the performance.

Jones sets Curlew River on a rectangular thrust stage that sits at an oblique angle to the audience. The upstage area becomes a stylized ferry, with a mast rising from the stage, its single boom giving the mast the aspect of a cross. Jones uses the ferry's sail as a projection screen, but the videos are a trite distraction from the heart of the drama. If there's a boat on stage, and constant mentions of a ferry and a river, there's no need to show the river by projecting moving water. Some video is also projected onto the stage, but these projections were nearly impossible to see from my location in the orchestra section.

Ian Bostridge brought a big and robust tenor to the central role of the Madwoman, perhaps too robust for the Madwoman's delicate music. Jones gave him a fairly restricted set of movements to indicate that madness, and he spent a lot of time staring up at the sky, following the movements of the birds, or staring at the floor. Perhaps, given his voice, a less restrained, wilder physical vocabulary would have worked better to express the character's insanity. Baritone Jeremy White was a robust and manly Abbott, Neal Davis, bass, a sympathetic traveler. Perhaps best of all was bass-baritone Mark Stone's sarcastic and suspicious Ferryman.

With all of this excellence on stage, why did Curlew River have so little emotional impact? The performance was more like watching a beautiful object at a distance than experiencing a drama, not quite succeeding as either opera or religious ritual. Despite the excellence of the performers, the dramatic arc of the libretto and music was lost, and there was no sense of climax or catharsis when the Madwoman learns that the dead child was her son — or when his ghost appears and sings along with the chorus.