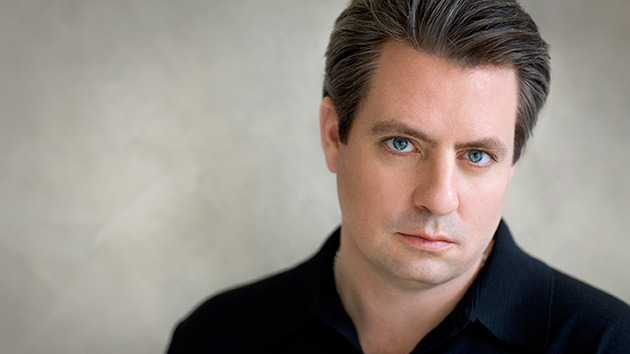 Broad shouldered and barrel-chested, his tawny hair swept back from a prominent high forehead, Matthew Polenzani is the visual antithesis of the reed-like lyric tenor. His movements, in a knockout recital presented by Cal Performances at Berkeley’s First Congregational Church on the last day of January, were at once emphatic and economical, each gesture and expression reduced to its potent essence. But neither his brawny appearance nor focused stage presence could fully prepare the listener for the torrent of magnificent sound this exceptional American tenor produces.

A set of five German songs by Franz Liszt served early notice on Friday. Arriving a bit late, after a protracted negotiation with the traffic-snarled Bay Bridge, I missed the opening Beethoven song (“Adelaide”) and remained at the back of the house for the first set of Liszt selections. Distance was no issue, whether Polenzani was exulting over the gleam of evening light and golden clouds (“The Happy One”), floating a white swan (“The Quiet Water Rose”) or most memorably evoking the Cologne Cathedral (“In the Rhine, in the Fair Stream”).

Sheer volume, impressive as it was even to a back-row listener, was only part of the story. Polenzani’s ability to shift from thunder to lustrous light and layer tonal shifts into a natural, almost vernacular reading of the texts came across with brightness, clarity and ease. That cathedral moment, in Liszt’s vivid setting of a Heine poem, was particularly telling. Somehow, even as a rich vocal blast conjured up the heft and height of the church’s towering stone facade, a sheen of color and sparkle suggested the delicate and intricate carving. Polenzani is a mighty one-man instrument, from the sonorous, deep pedal points of his low notes to the glittering high shine at the upper reaches.

The First Congregational’s silver organ pipes made for an ideal backdrop. Polenzani is a mighty one-man instrument, from the sonorous, deep pedal points of his low notes to the glittering, high shine at the upper reaches. There were few if any discernible register shifts.  Breath control was similarly without incident. In a delightfully eccentric program that featured Ravel, Barber, and Satie (of all people) in the second half, the singer pulled out all the stops.

A short break in the first half of the program, before a second set of Liszt songs (on French texts by Victor Hugo), allowed me to take my ticketed seat in the third row. From there I was able to appreciate Polenzani’s technique and quietly commanding aura up close. “If There’s a Lovely Grassy Spot” got a plump, nasal sound, both gently muted and precisely articulated. The charming “Child, If I Were a King” brought out the tenor’s instinct for storytelling, dramatic impersonation, and teasing hesitation. In “How, Asked the Men,” he became a kind of vocal feminist, speaking back to a horde of dense males. In “Oh, When I Sleep,” Petrarch and his beloved Laura took on an uncanny presence, where even the lightest caress had a kind of urgent muscularity.

Polenzani, who is every bit as ingratiating a speaker as he is a singer, chatted a bit about the Satie oddities that opened the second portion of the evening. His splendid accompanist Julius Drake opened the first, “The Bronze Statue,” with a jaunty, boogie-woogie-inflected vamp. Polenzani found the quizzical, comic vein and lightly puzzled expression for  “Daphénéo,” about a pun-induced misunderstanding. “The Hatmaker” served up a tiny slice of Lewis Carroll absurdity.

Barber’s rustic “Hermit Songs” brought out a sometimes raw tone offset by subtle touches. There was an unnerving trip to purgatory, an irony-tinged “sweet little bell” that was anything but, and a taunting sneer in “Promiscuity.” Polenzani’s “acting” was perfectly judged for a recital, reined in and carefully cultivated, but it was clear what a compelling actor he is on the operatic stage.

Two tantalizing encores finished off the night. In Reynaldo Hahn’s lusciously atmospheric “La Barcheta,” Polenzani unwrapped the liquid, long line and creamy tone that make him a natural for the Italian repertoire. Then, in honor of Schubert’s birthday, an elegantly restrained account of that composer’s “An die Musik” sent the audience off brimming with that song’s expressions of gratitude for music itself.

Not even a clogged Bay Bridge toll plaza could break that kind of spell.