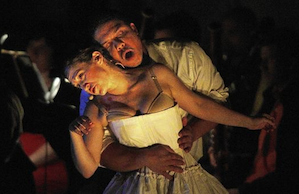 Steven Stucky’s comic opera sauntered into the attic of my brain Friday night, kicking the dusty furniture of my experiences in classical music, shedding forth a myriad of associations, and generating a cornucopia of chuckles in the process. The Classical Style: An Opera (of Sorts) broadsided many of the pretensions of my field, yet did so in such a charming and good-natured manner, I could not help but laugh and mutter to myself, “So true!”

Read live by undergraduates in a college coffee house, Jeremy Denk’s libretto would be a hit on its own terms, but coupled with Stucky’s savvy pastiches, deft orchestrations for an ensemble of 40 musicians, and singing by eight superb professionals at UC Berkeley’s Hertz Hall, it is no wonder the sold-out audience awarded the enterprise conducted by Robert Spano such an immense ovation.

The basis for the hilarity is most unlikely: the book The Classical Style, a monument of musicology written by the late pianist and intellectual, Charles Rosen. Rosen himself is one of the 18 characters in the opera, along with five other musicologists and music students, four composers, three characters from Don Giovanni, four personifications of chord types, and a bartender. 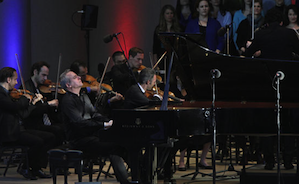 The plot “of sorts” involves Mozart, Beethoven, and Haydn. They are tired of bickering and playing Scrabble in heaven, and concerned about a New York Times article on the demise of classical music. Reading parts of Rosen’s book, they decide to seek him out for advice on how “to recover the freshness” they once had, how to be “relevant” today. Meanwhile, a music student visits Rosen’s apartment to remind him that he needs to attend a seminar on sonata form. The interruption puts Rosen in one of several short lecture modes in the opera, during which he imparts some choice quotes from his book to his audience.

Between Rosen’s lectures, farcical scenes occur amongst the three composers and the other characters, mostly in a bar. One of these is a love triangle between dominant, subdominant, and tonic chords. A glossary was provided to audience members, but the personalities were so well drawn and acted (the Tonic a narcissist, the Dominant always feeling incomplete, the Subdominant a regal reconciler), technical knowledge of the chords’ functions was unnecessary. Next in line for ridicule are musicologists: first for their jargon, so leaden that it can drive even a Don Giovanni to impotence; and second, for their contributions to the seminar on sonata form (which Rosen fails to attend). Finally, the Chord Triangle subplot reappears with the sudden entrance of the Tristan Chord, who, eyepatch and all, sings a parody of a Wotan monologue from Wagner’s Ring cycle.

The three composers finally make their way to Rosen’s apartment, only to be rebuffed in their quest, realizing that “composers are better off dead.” Don Giovanni drags an annoying musicologist off to hell, and Rosen is greeted by his friend and composer Robert Schumann, who declares that sonatas have run their course. The three composers chime out in heaven the surprisingly profound (and debatable — see below) moral of the exercise: The Classical Style is no longer “the natural mode of expression.” It has a new function, “the illusion of reliving history.” To keep that function, “a shadowy life-in-death,” “the style must be prevented from becoming truly alive once again.” 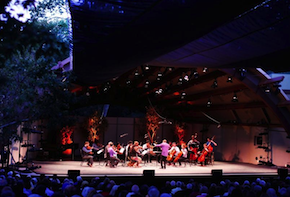 Stucky’s highly effective music moves seamlessly between so many quotations and allusions of the opera’s composers; there is little space left for any music that could be called stylistically his own. Only in the opera’s introduction and in the semi-jazzy segues to the bar scenes was a 21st-century sound heard. Stucky did compose a Classical-style sonata to match the words for the seminar. Unfortunately, it struck me as the lamest part of the opera, musically, but the words were funny enough to carry the scene anyway.

Every single one of the singers was simply a joy to hear. Soprano Jennifer Zetlan was an especially Amadeus-obsessed Mozart. Bass-baritone Aubrey Allicock was a hilarious Tonic and Don Giovanni. Ashraf Sewailam’s rich and powerful bass-baritone and gestures served Beethoven and the Commendatore well. Tenor Keith Jameson’s wannabe-musicologist Snibblesworth was so effective, I wanted to run onstage and strangle his obnoxious character. Kim Josephson, baritone, was more of a speaker than singer as Rosen, but came marvelously into his own as the Wotan/Tristan Chord. Tenor Dominic Armstrong performed flawlessly as the straightmen Haydn and the Bartender. Finally, mezzo-sopranos Rachel Calloway and Peabody Southwell impressed in their respective roles as Dominent/Musicologist and Subdominant/Schumann.

I cannot praise the entire production staff more highly. Sets were rightly at a bare minimum for the venue; Milessa Trn’s costumes were simple but wryly effective; Mary Birnbaum’s direction seemed right on. Spano’s orchestral ensemble The Knights was perfectly balanced, nicely paced, and performed to the highest expectations. This was helped by the co-presence in The Knights of The Riders String Quartet, who began the evening standing (except for the cellist, who sat on chairs stacked three deep) and playing the 21-minute “Rider” quartet of Haydn’s in G Minor, Op. 74, No. 3. The opera was so good, this extra bit was really unnecessary, but the performance was so excellent, I had no complaints.

Special thanks go to Ojai North and Cal Performances not only for their superior management of the experience in general with pre-concert talks, etc., but also for printing the entire 33-page libretto in the program and providing enough light to read it — as well as hard-to-read supertitles for anyone willing to crane their neck up into Hertz Hall’s lofty rafters.

To return to the moral of the opera, I was fascinated by the ghosts of later composers evoked by Stucky’s pastiches. The evocations, whether planned or incidental, show the unmistakable and pervading influences of the four masters appearing in the opera. I heard immediate followers like Rossini and bel canto composers, but also later ones like Richard Strauss (the Alpine Symphony, Salome, Till Eulenspiegel) and Brahms (First Symphony, songs). Wagner was not in the opera in person, and was not evoked other than in the very funny scene about the Tristan chord. In retrospect, that scene, attractive though it was, was an unnecessary tangent that detracted from the true focus of the opera. Stucky should cut it and put it in a subsequent opera: There’s enough dirt on Wagner to make a comic opera of three or more acts.

I wonder, finally, what Rosen would have thought of Stucky and Denk’s achievement. I never knew the man, but I know that he would not have called it the funniest thing he had ever witnessed since he wrote “Nothing is more comic than the resentment of contemporary art, the self-righteous indignation aroused by its difficulty.” Rosen was a great advocate of modernist music during his lifetime and convinced that initial difficulty of understanding was essentially a prerequisite for greatness in music. He even felt the persistence of Rachmaninov was due more to the composer’s pianistic challenges than to its appeal to the public.

Perhaps it is difficult for a satirical work to last becuase of its topicality. If he had a generous sense of humor, Rosen probably would have enjoyed the setting of his magnum opus, but would not have considered it a candidate for greatness. The audience liked it too much. It is ironic that the “difficult” music so championed by Rosen seems to be suffering the same fate as the demise of the Classical Style: First Minimalism and Postmodernism, and now the new New Eclecticism have succeeded Modernism as the styles du jour. To keep the illusion of reliving history, must the masterpieces of Modernists “be prevented from becoming truly alive once again”?