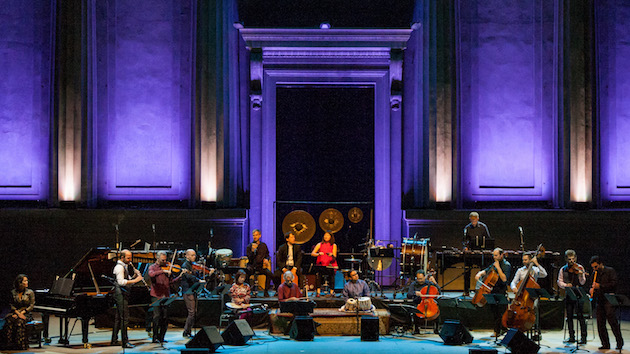 At a Silk Road Ensemble performance, it’s easy to zero in on a single moment and think you’ll never hear such a beautiful sound again. 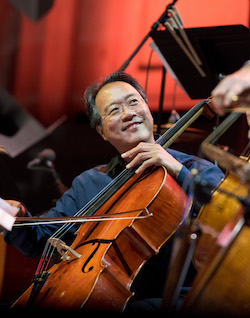 Then, after you’ve been captivated by Kinan Azmeh’s embroidered clarinet playing and Jeffrey Beecher’s thick jungle of bass tones, it happens again: A single “thwap” from Wu Man’s pipa strikes a touchpoint and causes you to feel connected, like kin, regardless of your ethnicity.

Minutes later, as Cristina Pato sets aside her Galician bagpipes (gaita) to wander into melody on the piano, a startling thought disrupts: That fellow with the cello weaving his way in and out of Pato’s sensitive playing is the renowned Yo-Yo Ma, founder of the ensemble—and you’ve noticed him as merely equal to the rest. But it’s a passing thought because he's playing along as if he’s just a guy in a band: A star amid other stars is simply one point in a galaxy.

Such were the mini pinnacles on Thursday, August 18, which added up to a mountain range of world music at Berkeley’s Hearst Greek Theatre. A cool but not cold breeze caused tree branches to sway and people wrapped themselves in blankets at the outdoor venue, but the 15 musicians performing on Eastern and Western instruments were hot. Especially in the first half of the program, the colors and textures of individual instruments—and the artists who played them—expressed their subtle and grand capabilities. The second act presented three works too similar in structure—solos that turned the same corner to wind up in splashy, whole-ensemble frenzies. But that seems like a minor objection.

Much of the evening’s program drew from the group’s newest album, Sing Me Home. This represents a chance, as Yo-Yo Ma suggested to the near-capacity audience, for the 18-year-old ensemble to do what 18-year-olds do: redefine “home.” 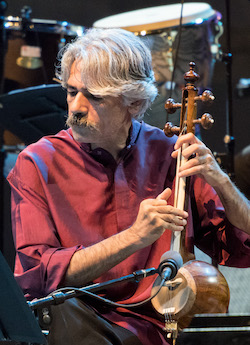 One piece not on the album was the evening’s high point. Composer and violinist Colin Jacobsen introduced Atashgah, a work inspired by his visit to an ancient fire temple in Iran in 2004. The fiery performance of Kayhan Kalhor on the kamancheh, was mesmerizing. Kalhor, kneeling center stage, his bow hand turned palm upright as he pivoted the stringed instrument, suggested supplication. As if drawn by Jacobsen and the other strings, the sweetness of his solo spiraled into unexpected places: piercing, sustained notes; polyrhythms that created irresistible tension; 16th-notes so fleeting they shimmered and were felt as much as heard. Atashgah is the kind of piece that makes you forget that cultures and countries fall into war. It is music that makes you hope it will never reach its end.

East and West also dissolved in Going Home, set to the Largo from Dvorak’s New World Symphony by Williams Arms Fisher and arranged for Silk Road by Jeremy Kittel. Vocalist Wu Tong sang the lullaby-like song in Mandarin and English. “Sang” seems almost an insult as a word used to describe the power, longing, hope, and homesickness Tong expressed. Perhaps it was the sheer novelty of the human voice emerging from the concert’s web of instrumentation that made it so, but Tong was profoundly moving every time he sang in the concert.

The ensemble’s spirited funkiness was best captured in Shane Shanahan’s arrangement of Billy Strayhorn’s Take the “A” Train. The classic 1939 tune gained exuberance with spectacular flourishes from the strings and clarinet and sudden decelerations led by the ensemble’s terrific percussionists. In other works, vitality came often from Kinan Azmeh, laying down impressive solos that could have been a satisfying concert on their own, or Wu Man drawing luminous tones or crafting raw, multi-textured passages from the pipa.

From Yo-Yo Ma to Sandeep Das, who blazed trails on the tabla to Wu Tong’s firm grip and command on the vertical pipes of his sheng to the applause that led to two encores, human hands were, and are, everyday and amazing musical tools that people worldwide have in common.