Yes, they can: The Conservatory kids can, though somewhat cautiously, and certainly staying away from the climactic splits, while still conveying the buoyant spirit of the dissolute French, avec plaisir. On Thursday night, the first of four performances at Cowell Theater, the San Francisco Conservatory of Music presented Jacques Offenbach's Orpheus in the Underworld in a delightful admixture of a cute school production and a first-class musical performance. 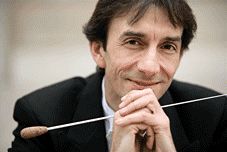 Richard Harrell's production uses a Donald Pippin–class translation by Buck Ross, and it is thoroughly enjoyable. But what the audience takes away from the wind-whipped Fort Mason pier is Santa Rosa Symphony Music Director Bruno Ferrandis' masterful leadership of the Conservatory Orchestra, whose members played like occupants of the La Scala pit. The Santa Rosa orchestra should program concert versions of operas in profusion.

Even though a few singers lagged behind Ferrandis' baton, and most voices were operetta strength (more than good enough since that's what they were singing), the orchestra would have sounded at home in many an opera house. With only pairs of violas, cellos, flutes, oboes, clarinets, bassoons, trumpets — in addition to the luxury of three horns and nine (9) violins–this is an orchestra of great and good sound. Along with David Heilman's impressive tenor, Orpheus is musically represented by solo violin, and concertmaster Philip Brezina gave the failed husband a magic voice.

In this version, there is nothing tragic about the Orpheus-Eurydice relationship. The lady here (Emma McNairy, in an evening-long 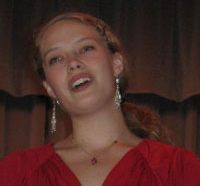 star performance) can't stand his music, has a lengthy and defiant affair with Pluto (the robust Michael Desnoyers), and goes to Hell willingly. The downside of the amusing story is that Orpheus doesn't show up again until Act 4, and so Heilman doesn't get a chance to sing nearly enough. I would have wanted to hear him a lot more.

Harrell sets Act 1 in Golden Gate Park and the Olympus of Act 2 in the San Francisco Opera House — with precious little contribution to the story — but after Act 3's geography-free Pluto's boudoir, the San Francisco theme pays off in Act 4's underworld setting in Haight-Ashbury, 1960s vintage, complete with mildly psychedelic projections on the theater walls.

Things really pick up in the home of the gods (pining for some excitement, not to be found until their group tour to Hell), with a plethora of divinities singing well — especially Elise Cordle (Cupid) and Benjamin Cohen (Mars) — in a realm ruled over by Emmanuel Franco's Jupiter.

Franco is a major stage presence; after his transformation into a fly to court Eurydice, he and McNairy sing/dance/fly a duet that's for the ages.

Even after an announcement about Evgenia Chaverdova being indisposed, she presented a vibrant, big-voiced Public Opinion. Robert Cowan's John Styx, Cristina Marino's Minerva, and Jeremy Kreamer's Bacchus were impressive.

The double-cast production will feature Ashley Seaton, A.J. Glueckert, and Daniel Epstein in the leading roles on April 3 and 5. The opening-night cast will be heard again on April 4.