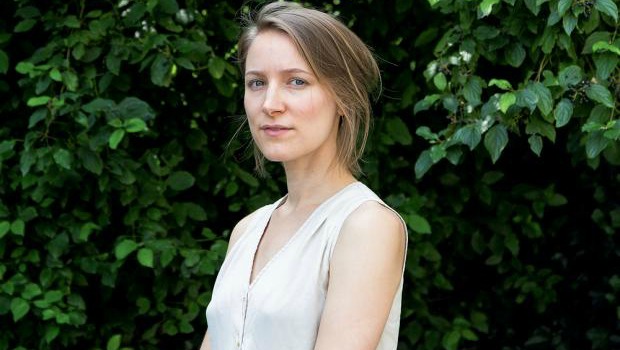 Berlin-based, new music guitarist Seth Josel appeared at the Center for New Music last Tuesday in Danny Clay’s ongoing curatorial series Don’t Be a Stranger. Josel was equipped with a flat-top, acoustic, steel-string guitar — a kind of guitar much commonly encountered on classical stages than its nylon or even electric counterpart.

There were good reasons for this unusual choice, however, as the instrument’s quicker attack, longer sustain, and brilliant voice were indeed perfectly suited for the task at hand —a performance of point/wave, Catherine Lamb’s evening length piece for guitar and live ambient processing.

Lamb, born in Washington, is now based in Germany, like Josel. She has forged an exciting and individual musical style which has been influenced by her study of Hindustani classical music and by her teachers at Cal Arts, James Tenney (whose uncategorizable, experimental music was partly driven by his theoretical interests) and Michael Pisaro (who is a master of the slow, quiet, extended duration form).

The music had already begun as the audience arrived: The performance space gently resounded with the “ambient chord,” a series of pulsating drones whose behavior was controlled from a computer algorithm interpreting the audio captured by an inconspicuous microphone set up in the Center’s mail slot. When I first heard about the performance, I had anticipated (and perhaps feared) the ambient processing would reflect the urban cacophony of the concert’s Taylor St. location. I was pleasantly surprised to verify that the environmental sounds were used more as a generator of parametric controls than a source of sounds.

The ambient chord and the guitar were connected by their shared tuning — a just intonation scheme that favored higher, more complex harmonics, while maintaining a relatively consonant and inviting surface. The music unfolded as a series of sound events (either block-chords or slow, arpeggiated gestures of two to four notes) which the guitarist had to “place” within the resonance of the electronic accompaniment. These events were made almost entirely of open string pitches and natural harmonics, with the occasional fretted note chosen so as not to diverge from the purity of the tuning (fretted intervals of a second, fourth, and fifth being quite close to their just counterparts on an equal-tempered fretboard.) 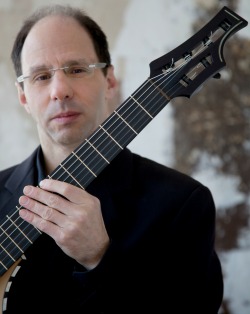 The sequence of sonorities was long but cyclical, allowing the audience to eventually catch glimpses of its repeating structure over the length of the performance, which lasted over one hour. Yet as time slowly passed I simply lost myself in the ever-evolving yet familiar soundscape: I was quite surprised at the elapsed length, which I would have guessed had lasted about half the time it actually did.

Despite my initial reservations, the steel string guitar proved to have been an insightful choice on the composer’s part—the instrument’s brighter-sounding harmonics lingered longer in the space before eventually blending with the ambient chord, blurring the sonic distance between the two and evoking the “points in a wave” analogy implied in the title.

Throughout the performance, Josel demonstrated razor-sharp focus by sustaining his attention and commitment over the extended duration of time, and producing consistently pure sounds devoid of excessive noise. The same could not be said of the Center’s notoriously boisterous surroundings; yet even those intrusions seemed to fit in the musical space that Lamb had created, resonating for a moment before dissolving into the ongoing wave.