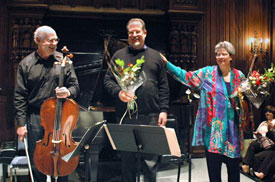 What a coup it was for the important but small Music at Kohl Mansion organization, and its executive director, Patricia Kristof Moy, to enlist this mighty Trio of Four for the Sunday celebration of the program's 25th anniversary.
Yes, We Have No Adventure
You would think that such an occasion would call for exciting, challenging, unusual music. You would be wrong in this instance. Nothing could have been less adventurous that FOG’s program of ancient chamber music warhorses: Haydn’s 1797 Trio No. 27 in C Major; Beethoven’s 1808 Piano Trio No. 5 in E-flat Major, Op. 70, No. 2; and Brahms’ 1882 Piano Trio No. 2 in C Major, Op. 87. Is this any way to satisfy one of the most knowledgeable audiences in our neck of the woods?

Well, in a way, there was a challenge — to the players. Could they make the performance of old chestnuts exciting in spite of the audience’s familiarity with the music? That supposed mission was accomplished by and large, but would it have killed the FOGers to be less fogey-ish and venture beyond 1900? Oh well.

Steinberg did his part to liven things up with his introductory lines. Of the Piano Trio No. 5, he opined, “Beethoven invented Schubert” — a good line. Later, uncharacteristically, the consistently kind and benign Steinberg insisted forcefully, against a passing murmur in the audience, that the composition of the Brahms trio was influenced by the composer’s leisurely walks in search of restaurants with “the perfect goulash soup.” It must be said that the speaker failed to connect Brahms’ alleged gastronomic quest with the use of the C Major key. Still, as usual Steinberg stirred things up sufficiently to stimulate eager anticipation for the concert.
How Bright the American Steinway?
Overeagerness on Ohlsson’s part was a problem in the opening Allegro of the Haydn trio. Playing on an American (rather than Hamburg) Steinway, with its gloriously extra-bright sound, the pianist ran roughshod over Fleezanis and Grebanier, two muscular, mighty string players who are not easy to overpower. Yet Ohlsson’s notes, peeling like so many small bells, stuck out from the fabric of the music for long minutes.

True, as program annotator Kai Christiansen points out, the late Haydn trios break with the tradition of the piano dutifully providing continuo and filling out harmonies. But surely the then-newfangled "accompanied sonata" doesn’t mean a complete reversal of roles. Christiansen disagrees, saying that the violin is "tasked with fleet embellishments, occasional leads." At any rate, with Ohlsson’s dedication to ensemble playing, and Haydn’s emphasis on the cello in the Andante, the music started flowing in glorious balance, and by the jolly Presto, Papa Haydn’s Flying Circus came across in full bloom.

The Beethoven, a relatively early work, opened with earnestness and near-excessive respect. If fire and passion were held under control, the three musicians’ superb technique and gorgeous bel canto sound made the performance truly special. Flowing beauty and appealing lyricism were maintained throughout the work, justifying Steinberg’s "invention of Schubert" remark.
Brahmsian Gaiety
Steinberg’s Brahms references returned forcefully to mind during the composer’s mighty-and-charming Op. 87, with all its “huge enjoyment,” “tremendous virtuosity,” and “white cloud banks.” FOG played with passionate abandon, leaning into the music with the enthusiasm of an outstanding youth orchestra, the sound leavened with decades of experience and wisdom.

Here, at last, the challenge of playing wicked old songs as if they had just been performed for the first time was fully met. Ohlsson’s swift, effortless, weightless notes from the piano merged with the warm dignity of Grebanier’s cello and Fleezanis’ powerful, gentle violin. Finally the question “What’s wrong with being stuck in the 19th century?” received an answer of happy certainty. Not a darn thing.