On Friday evening, the UC Davis-based Empyrean Ensemble made a guest appearance on San Francisco's respectable Old First Concert series, presenting a reprise of its program "Double Trouble," first performed one month ago at the Mondavi Center in Davis. The concert's title comes from the final work on the program, Kurt Rohde's chamber concerto Double Trouble (2002), composed for the Empyrean Ensemble and performed by them several times since its premiere.
Naming the concert after this final work, the largest piece on the program and clearly the evening's centerpiece, made good enough sense. However, in a brief talk at the beginning of the concert, Empyrean codirector Laurie San Martin explained to the audience that the evening's entire repertoire had been selected to explore this idea of doubleness. What exactly this meant was anyone's guess, especially since the programming was so eclectic and scrambled. Did "double" refer to instrumentation (as in duets, of which there were two that night), genre (as in the old dance form double, which inspired parts of Rohde's work), semantic ("doublespeak"), or any other witty play on the word that might be thought up?

The answer is probably yes to all of the above. Doubleness can mean anything, hence any piece could have been plugged into this program and justified by its conceptual universal solvent. The alleged thematic bind holding the program together was little more than an empty slogan, and did little to explain the hodgepodge selection of pieces. However, any shortcomings in the program were more than adequately made up for by the ensemble's musicians, who consistently performed at a high level all night. 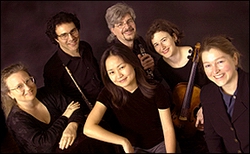 The concert opened with the premiere of Peter Josheff's Viola and Mallets (2007), commissioned by the Empyrean Ensemble. Josheff, a clarinetist with Empyrean, wrote the work for his ensemble mates, violist Ellen Ruth Rose and percussionist Chris Froh, who performed the work. As a listener, the work is difficult to follow, as numerous and diverse sections of seemingly unrelated music follow one after the other. The work opens with a sparse, almost pointillistic texture in which the percussionist bows harmonics on keyboard mallet instruments.

This section gives way to a sonoristic texture of full tone clusters, which itself turns into dancelike rhythms reminiscent of contemporary American band music. To my mind, the most interesting part of the work came roughly two-thirds of the way through, in a long viola soliloquy performed beautifully by Ruth Rose. It showed Josheff at his finest, beautifully capturing the introspective lyricism of late Strauss.

While Ruth Rose and Froh gave respectable readings of the work, they didn't seem particularly comfortable with it. Ruth Rose, whose playing I've long admired, didn't bring out phrases, shapes, or ideas in the demonstrative and expressive way she usually does. My guess is that, this being a premiere, the musicians simply didn't have enough time to learn the piece as well as they had liked. Also, the mallet percussion oftentimes overpowered the viola, an obvious peril in a boomy, resonant space like Old First Church.

The first half concluded with three movements for unaccompanied flutist by Harold Meltzer, and a duet for bass clarinet and baritone saxophone by Lee Hyla. I write flutist rather than flute because Meltzer's work, Rumors (2000), calls for a different member of the flute family in each movement. The first movement, "Trapset," is for alto flute; the second movement, "The Heaven of Animals," calls for C flute; and the third, "Focus Group," is for piccolo. (A fourth movement, "Bel Canto," for bass flute, was not performed.)

Flutist Tod Brody navigated the piece well, particularly the interesting and colorful extended techniques that are most notable throughout the first movement, which consists almost entirely of percussive sounds created by blowing air across or into the instrument while clicking the keys in steady rhythms. Bass clarinetist Peter Josheff and baritone saxophonist Kevin Steward turned in solid performances of Hyla's We Speak Etruscan (1992).

While the musicians gave laudable performances, neither work was particularly thrilling. This is not to say they were boring or uninteresting; both works were enjoyable enough to listen to once, but didn't strike me as particularly memorable. In the case of the Meltzer, each of the movements is built around one particular concept or a narrow musical idea. The end result comes across as a little gimmicky and one-dimensional. Hyla's work consists of an extended bebop middle section framed by slower, freer sections clearly derived from The Rite of Spring, in which bass-clef reed instruments summon prehistoricism through improvistory-sounding passages played in their upper ranges. While the end result was sometimes pleasant, it seemed all too predictable.
A Space Problem
The highlight of the program was Sheila Silver's G.Whiz (1988), scored for two violins and percussion. The work is written in a five-part palindrome form (ABCBA) with coda, and is propelled along by a regular and unrelenting subtactile pulse established at the outset. Violinists Terrie Baune and Anna Presler and percussionist Froh gave the work an exciting performance, although, once again, the keyboard percussion occasionally overbalanced the ensemble.

The concert concluded with a solid reading of Kurt Rohde's enjoyable Double Trouble (2002), ably conducted by Mary Chun. Double Trouble has been reviewed in SFCV at least three times, so I won't take the space to describe the work. Suffice it to say that Ruth Rose and Rohde performed the solo parts admirably, and the accompanying ensemble gave strong readings, too.

The end of Double Trouble was interrupted by a raucous car alarm outside the church. Unfortunately, this was a familiar problem throughout the night — the beginning of the Meltzer was held up slightly until traffic noises subsided, and the sounds of musicians warming up backstage carried easily into the sanctuary. While Old First Church is in many ways a beautiful space, it simply was not designed for concert performances.

I'd be eager to hear the ensemble perform in a better acoustic environment, and we will all have that opportunity when it closes out the 2006-2007 season at the Mondavi Center on May 30, with a performance of works by UC Davis graduate student composers.