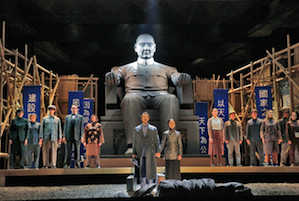 Lightning struck the arid skies of New Mexico at the exact downbeat of Dr. Sun Yat-sen, a new opera by composer Huang Ruo and librettist Candace Mui-ngam Chong, which received its American premiere last Saturday at the Santa Fe Opera. Maybe that heavenly statement was trying to tell us something about this work. Or about what has happened in China over the past century.

In subject and impact, the story of the man who liberated China from feudalism a century ago could well serve as a prequel to John Adams’ Nixon in China. Both works deal with propelling the historically hermetic country into the modern world. What sets them apart is the new work has a sensibility that is the product of two ethnic Chinese creators and is sung in the Chinese languages of Mandarin and Cantonese.

The ephemeral Sun Yat-sen may have faded from memory in the English-speaking world, but he remains iconic to his own people. His role has been compared to that of George Washington, but a better choice might be pamphleteer Thomas Paine. Neither a battlefield general nor a populist firebrand, Sun was a bookish medical doctor who gathered words to inspire people while others built armies to conquer them. Working mainly in exile, often in the United States, his return as provisional president of the new Republic of China was short-lived. Yet Chinese of all political persuasions still claim him as the father of modern China.

Aiming to present Sun Yat-sen as a living person, not on a patriotic pedestal, the opera’s creators relegated his political legacy mainly to backdrop, allusion, and reminiscence, while setting most of the action on his domestic life. While useful in fleshing out the man, the emphasis could have left under-nourished the work’s raison d’etre to illuminate the founder of a new Chinese order.

Fortunately, director James Robinson’s production achieved a compelling theatricalization of the narrative implied in Chong’s scenario. With ideal vocal performances of a score that was dazzling, innovative, and exotic, and brilliantly executed by the orchestra led by conductor Carolyn Kuan, the work triumphed with the capacity crowd on opening night. After more than a dozen stillborn new works at the Santa Fe Opera in recent decades, the company can now claim its first secure success in Dr. Sun Yat-sen.

With ideal vocal performances of a score that was dazzling, innovative, and exotic, and brilliantly executed by the orchestra led by conductor Carolyn Kuan, the work triumphed.

The storyline focuses on two of Sun’s marriages and his friendship with co-revolutionist Charlie Soong. In the telling, each of the main characters undergoes a spiritual journey. The narrative opens in Shanghai with businessman and Methodist minister Soong giving to Sun’s cause the funds he has just raised for the construction of a new church. Soong’s happy marriage contrasts with Sun’s unhappy one to Lu Muzhen. Arranged years before by feudal custom, it had produced three children but little cohabitation. With Sun and the Soongs exiled in Japan after the failed revolution, Sun is joined by Soong’s second daughter, Ching-ling, who becomes his political assistant. They fall in love. At her wedding in Japan, the elder Soong is incensed at her union with the already married older man. Lu Muzhen resolves the family strife by offering her divorce, but the elder Soong’s anger becomes a life-long estrangement. Subsequently, Sun returns to China to help overthrow the sclerotic Qing Dynasty. Back in Shanghai years later, the dying Soong repents of his anger and in restitution gives Ching-ling her bridal dress.

Propelling the story was Huang Ruo’s richly expressive score. Years in the making, it had evolved from two earlier versions: one for standard symphony orchestra and the other for Chinese instruments. The latter was used for the 2011 Hong Kong premiere to celebrate the centenary of the revolution that overthrew the Qing dynasty. (Its projected Beijing premiere had been “postponed” for reasons that may have to do with the opera’s focus on Sun’s private life.) The brand new score for Santa Fe has incorporated elements of both earlier versions, so the performance here might well be billed as the world premiere of the score’s definitive East-West orchestral fusion. It merits the commendation. 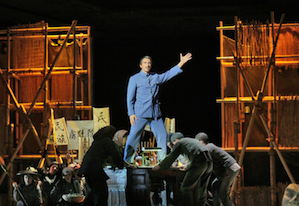 Huang Ruo’s style, which he calls dimensionalism for its many layers of meanings, has clear derivations in minimalism, but his talent avoids that style’s sometimes mind-numbing formulas. His harmonic progressions are deliciously original and his dissonances are self-sufficient expressions that neither intend nor need resolution.

Huang Ruo’s writing for Chong’s Mandarin and Cantonese libretto involved a difficult challenge in the vocal lines. Chinese is a tonal language (sung as it is spoken) where the same words have different meanings depending on the pitch. Huang had to reconcile the competing four tones of the Chinese language with the five tones of its pentatonic music and the twelve tones of Western music.

His solution was to maintain the relative pitch relationships of Chinese in his melodies. An entirely new kind of vocalization was thus achieved in this opera. It takes an adjustment for a Western ear not to hear initial monotony in comparison to Western melody, but Huang Ruo more than compensates for that misperceived limitation by shaping unique melodic personas for each of his characters.

The title role was to have been sung by Warren Mok, the tenor-impresario of Opera Hong Kong who commissioned the work and sang it at the 2011 premiere. When Mok found himself overbooked, SFO asked tenor Joseph Dennis, an apprentice who had understudied the role, to make it his company debut.

Dennis made of this breakthrough opportunity a vocal triumph, though his tall, youthful frame and light hair gave him more the look of a Lieutenant Pinkerton than the owlish, middle-aged Chinese leader. With a silvery bright ring and ardent projection, he sailed through the high tessituras of Sun’s impassioned declarations, including a touching final aria based on Sun’s actual speeches. In tender dialogue with soprano Corinne Winters’ Ching-ling, he also provided a complimentary vocal timbre. Real chemistry was established between the two in the scene of wedding vows, accompanied by the guchan, a type of zither customarily played by a person in solitude.

Winters endowed Ching-ling with a tender anticipation to meeting him, making her, in the process, the opera’s most sympathetic character. Her final aria (“This loving homecoming…”) laments the miscarriage of her only child, a sacrifice made in the exigencies of saving her nation. It was accompanied by the plaintive quanzi (a tiny pipe-flute). The lyrically tender elegy induced the most sustained applause of any of the evening’s singing.

Baritone Gong Dong-Jian’s portrayal of Charlie Soong carried the evening’s most profound emotional journey, conveying this pivotal character’s initial charismatic strength in the mold of today’s liberation priests, his later intractable anger, and finally his end-of-life remorse at doubting his daughter and Sun’s committed love and mutual life mission. As his wife Ni Gui-zhen, mezzo MaryAnn McCormick had a reverse journey; initially doubting Sun’s sincerity, she came to support her daughter’s marriage to him and their decision to carry on revolutionary work.

Supportive amiability and a bit of comic relief were provided in the bouncy lines of baritone Chen Ye Yuan as Japanese host Mr. Umeya and the assuring tones of mezzo Katherine Carroll as Mrs. Umeya. Rebecca Witty’s warm mezzo made of hapless first wife Lu Mu-zhen a sympathetically stoic personality. As is customary at Santa Fe, Susanne Sheston’s chorus worked their usual vocal miracles, even when singing in phonetic Mandarin.

Designer Allen Moyer’s surround set of bamboo scaffolding at first suggested the work-in-progress of a new Methodist church, a model of which took center stage. As the opera progressed, it took on a more enduring symbol as the unfinished life work of Sun Yat-sen and a transitioning China. The design, along with choreographer Seán Curran’s employment of stylized Chinese dance traditions, and James Schuette’s imaginative costumes contributed to an impressive and imaginative physical production.

The opera concludes with a speech by Sun shunning personal glory and reminding all that he was a mere representative of the people. As the speech continues, a monumental statue of Sun roles out from the back of the stage. It seemed the sort of bloated gesture that Sun’s own words cautioned his successors to avoid.

Dr. Sun Yat-sen has elements of greatness. Beyond that, the opera is an important statement for our time, highlighting, once more, the emergence of a Chinese musical culture in dialogue with the world around it.