Donizetti's most effervescent music, a simple and heartwarming story, melodies galore — The Elixir of Love is a virtually foolproof opera. Small companies, even schools produce it successfully, and even in a big house, you can't really fault a "prudent" approach to casting young singers, not-quite-stars, and such. The work will take care of itself.
No such shortcuts were taken in the San Francisco Opera production, which opened on Wednesday. The cast is solid gold, and includes three memorable debutants, the return of Ramón Vargas as Nemorino, and the bright Giannetta of Ji Young Yang (who will sing Adina in the upcoming Family Performances, Nov. 8 and 15 — a much anticipated role debut by this outstanding Adler Fellow). 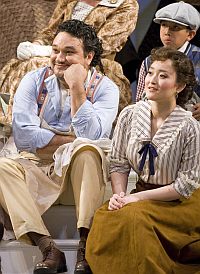 The debutants are: Inva Mula as Adina, Giorgio Caoduro as Belcore, and Alessandro Corbelli as Dulcamara, the "doctor" who dispenses the elixir that wins hearts and makes rich uncles drop dead just when money is needed.

Mula, the tiny Albanian soprano (who lent her remarkable voice to the 12-foot Blue Diva in the movie The Fifth Element), sang big and with affecting musicality. She projects effortlessly, and her singing goes to the heart of Donizetti's music. She is the latest in a series of great Adinas at the War Memorial Opera House (see below). 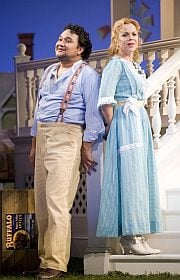 Caoduro is a real find. A natural "Verdi baritone" of heft and warmth, the young Italian singer could have phoned Belcore in and still have gotten the job done. Instead, he put his all into the role, cutting a dashing figure even with all the tomfoolery (of which there is a tad too much in James Robinson's busy stage direction). Corbelli, an Italian bass with a baritonal timbre who has had a long career in Europe as a comic bass, had a so-so first act, but came into his own later, especially in Dulcamara’s big duet with Adina. 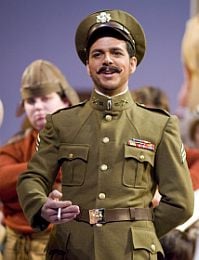 Vargas was terrific throughout the evening. The voice — a strong, solid, lyric tenor — is just one aspect of his performance. He was having a ball with the role of the shy, awkward, but winning country bumpkin, without overdoing it. Most importantly, he sang the role, instead of posing as “Il Tenore.” Even in "Una furtiva lagrima" (A furtive tear), done to a T, he was a lovesick, despairing Nemorino — not a case of the star belting out the song everyone was humming (silently or otherwise).

Allen Moyer's "minimalist" unit set — a bandstand in 1915 Napa Valley, against the countryside, which is represented by a kind of diorama on panels — is rather boring, the opposite of the director's nonstop shtick. The stage business ranges from Nemorino's ice cream truck, to soldiers in early football outfits (piling on each other rather hilariously and somewhat dangerously), to dressing the Opera Chorus as individuals — a good thing. 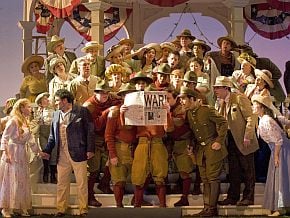 Finale, with Inva Mula and Ramon Vargas on the left

The Chorus acted up a storm and sang well all evening long. Their unanimity was continually surprising because veteran conductor Bruno Campanella provided no leadership for them — or the orchestra. Lax, unfocused, and often a quarter-beat behind the soloists, Campanella's direction (especially in the first act) lagged rather than led. The disappointment was all the greater because, seeing that Mr. Excitement Nicola Luisotti was in the audience, I imagined what he would have done with a score that should have snap, crackle, and pop instead of Wednesday night's languor.

And yet, given the great music and the extra-fine singing, this Elixir still has a lot of balm going for it. 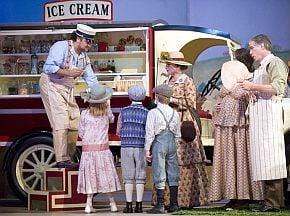