John Adams’ Doctor Atomic Symphony is an orchestral reduction, the soundtrack in a sense of his 2005 opera.  The work presents episodes from the opera, with three movements titled “The Laboratory,” “Panic,” and “Trinity.” 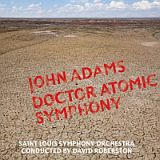 And yet, what is remarkable about the newly released Nonesuch recording of the symphony, with David Robertson conducting the Saint Louis Symphony, is that it works very well as “abstract music” in which you can hear whatever you like.

Chances are that this exciting music of crowning tension, large gestures, and multirhythmic pulses will perform its magic on listeners either with or without pictures of the opera in their mind’s eye.

“Trinity,” which is J. Robert Oppenheimer’s aria at the end of Act 1 — a peak moment in contemporary opera — is breathtaking. Both the code name for the A-bomb project and the reference to John Donne’s poem “Batter my heart, three-person’d God ...,” it lies at the heart of the opera as well as the symphony. Like some work by Janáček on meth, this is a piece you want to hear repeatedly.

Pity the poor general director of an opera company, though. Faced with all the self-righteous demand for new works, he or she can spend a fortune on commissioning and producing a new opera. Yet such works usually attract small audiences, and most of them don’t make it into the repertoire, or they disappear quickly.

The main reason: lack of music that will “live on.” Just in San Francisco, two of the last three premieres — Philip Glass’ 2007 Appomattox and Stewart Wallace’s 2008 The Bonesetter’s Daughter — are likely to have problems reappearing either on stage or as stand-alone music.

Doctor Atomic is the exception and is doing well, first in numerous stagings, and now in a symphonic manifestation, coming soon after the work’s well-received production at the Metropolitan Opera.

The recorded performance of the symphonic version is exceptional under the baton of Robertson, a great champion of contemporary music. It is an eminently polished realization, but perhaps to those who heard the San Francisco Opera premiere four years ago, under Donald Runnicles’ baton, some of the music’s intensity may seem attenuated.

The Atomic portion runs only 25 minutes; the rest of the CD is taken up by the first recording of Adams’ 2001 Guide to Strange Places, a broad, percussive work inspired by the book A Black Guide to Mysterious Provence, which the composer encountered on vacation in France.

“A chapter,” says Adams, “was dedicated to paysages insolites or ‘strange places.’ Each classification came with its own special identifying icon. It set my imagination off. ... In a sense, all of my pieces are travel pieces, often through paysages insolites — it’s the way I experience musical form.”