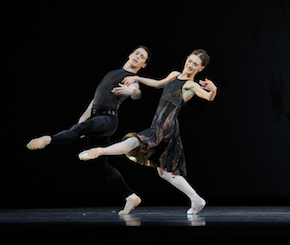 Enigmatic and often thrilling, Alexei Ratmansky’s evening-length ballet Shostakovich Trilogy, the second co-production of American Ballet Theatre and the San Francisco Ballet, had its West Coast premiere Wednesday at the War Memorial Opera House. The Russian-born Ratmansky, artist-in-residence at ABT, where the ballet premiered last year, has chosen three Dmitri Shostakovich works — Symphony No. 9, the Chamber Symphony, and Piano Concerto No. 1. Each was beautifully interpreted by the San Francisco Ballet Orchestra, conducted by Martin West. Each is distinctly its own animal. But via this creation, all are linked by themes that impacted the composer’s life and work in the Soviet era and, more noticeably given current affairs such as Russia’s annexation of the Crimea, the work of the choreographer as well. Shostakovich Trilogy is a loose yet elaborate weave whose contradictions, contrasts, and surprises mandate repeated viewing.

The opener, Symphony No. 9, best illustrated what we think of as the vicissitudes that affected Shostakovich’s artistic life as a culture hero and a musical iconoclast who trod a difficult path in the Stalinist era, hiding undertones of fear and irony like Easter eggs, under layers of nationalistic cheer, not to say fervor. The finds Ratmansky unearthed were especially rewarding here, as the leading couples — Sarah Van Patten and Carlos Quenedit; Simone Messmer and James Sofranko, as well as the dazzling principal Taras Domitro — moved from assurance to collapse, to recovery, to yet another episode of falling down flat on their backs.

The mood, however, remained rather light, reflected in the clever partnering, the accelerated speed, the virtuosity of the steps. The next two ballets felt darker, with sharper moments of satire and loss. The first ballet’s décor was a blue cyclorama, later replaced by George Tsypin’s backdrop of red biplanes and balloons and paratrooping men, suggesting a Soviet war machine, if a rather mild-mannered one. Throughout the ballets, the lighting was by Jennifer Tipton, with costumes by Keso Dekker. ABT’s Nancy Raffa, who has staged all Ratmansky’s work since 2009, did a marvelous job.

Chamber Symphony comes with more elaborate décor, based on Pavel Filonov’s painting of a group of men’s heads. They’re sketched lightly, these images, but at moments of emotional conflict, they come into sharper focus, as if choreographer and composer are making up their minds. The news isn’t all good. The music alludes to Russian persecution of the Jews, with reflective moves to a minor, urgent key, and the dancers stress it with shuddery movements of the hands. But it isn’t the only thing that’s going on, so there’s that enigmatic constrast again, that mixed message. Principal dancer Davit Karapetyan, shirtless beneath a dapper dark suit, is a man with a problem, or maybe to him it isn’t. We can’t quite be sure. 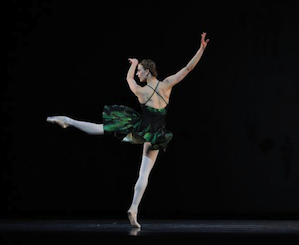 Three sexy women — Sasha de Sola, Lorena Feijoo, and Mathilde Froustey — all seem to be after him, in a flirtatious, hip-shaking way that turns rather cold. Feijoo is the one sympathetic figure of the trio, but through a brutal feat of choreographic legerdemain, she will be “disappeared.” And Karapetyan will be swarmed by a blond, leaping flotilla of bully boys — what my grandma used to call Cossacks.

We don’t really know what it means at the end when De Sola is lifted triumphantly above the crowd, but it doesn’t seem to bode well. Karapetyan’s performance was a dynamic tour de force, and the ballerinas were also impressive. Throughout the evening, the corps work was spot-on.

Pianist Michael McGraw and trumpeter John Pearson were featured in the final ballet, Piano Concerto No. 1, where contrasts offered new tension and disquiet as well as glorious dancing. Tsypin’s backdrop looked more aggressive; now there were suggestions of hammers and sickles and very sharp edges, all picked out in red, with the ballerinas, Yuan Yuan Tan and Maria Kochetkova, in red leotards. Their partners were Damian Smith and Vitor Luiz.

Where Kochetkova seemed initially the soul of pliancy in her partner’s arms, Tan, the (much) taller of the two, expressed resistance as she was lifted, one foot beating desperately. Her gloom was accentuated as her partner masked her eyes. But the couples, like the ensemble of a dozen corps dancers, rallied into a proudly expressive passage, replete with wonderful leaps from the men, that recalled the Bolshoi Ballet’s visit to New York in the 1980s, with ballets crafted to present the nation’s ideals.

These are, of course, different times. Ratmansky himself — born in St. Petersburg, or Leningrad, as it used to be called — was welcomed as artistic director of the Bolshoi in 2004, after spending many years working in the West and in Russia. The San Francisco ballet’s international roster is rich in the artistry of Russians, of former residents of the USSR. But we watch the news, and we hear what Shostakovich created, and, inevitably, we wonder.