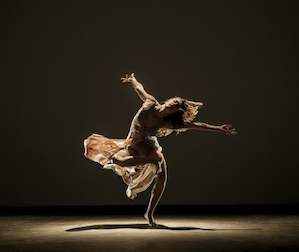 With The Luminous Edge, which had its world premiere Thursday night at the Lam Center, the company called Garrett + Moulton — choreographers Charles Moulton and Janice Garrett, longtime collaborators — have created something special.

The new work, for six dancers, a movement choir of 18, six (onstage) musicians and a contralto, sets high standards for itself and, more often than not in its 68-minute duration, reaches them. Framed by the movement choir, dozens of dances, with moods solemn, romantic, sad, or playful, are performed to music by Hildegard von Bingen, Gustav Mahler (songs from Kindertotenlieder), and contemporary composers Marc Mellits, Judd Greenstein, and Jonathan Russell (Garrett + Moulton’s musical director).

Emerging into David Robertson’s glowing, yes even luminous, lighting, the company dancers, arrive onstage between the choir’s two parallel rows, drifting in graceful slow, slow motion as if moving underwater through seaweed, or perhaps through a jar of peanut butter. Their dances, solo and in pairs and groups, start simply, even prosaically, becoming more intriguing as the ballet progresses.

Most dances these days don’t have movement choirs, though their concept of commenting and amplifying for the audience goes back to antiquity. This one, with its dancers’ flawless unison and commitment, works beautifully. It’s a further development of Moulton’s 1980 post-modern landmark Precision Ball Passing. That study in cooperation, coordination, and creativity, had whimsy tossed in for good measure.

In the new work, there are no props. The choir, dressed in black, takes up a position stage left in three rows of six people each, tightly packed and tightly wound. Their lower bodies are still, but their upper torsos, arms, and heads, illuminated on the darkened stage, are vividly in motion, sometimes reaching a prayerful ecstasy. Sometimes the choristers seem to be fondling the heads of their confreres below them, a gesture both intimate and slightly weird.

The movement choir complements the work of the six company dancers, framing them as they enter and exit, and a couple of times concealing them as they vanish from the stage in mid-dance, only to pop up amidst the choir.

Some of the more arresting dances focused on a theme of loneliness and isolation in a crowded world; company dancer Nol Simonse, in particular, captured attention, striking meditative poses as some of the choir dancers melted to the floor and quietly rolled away from him. They left him, but in another dance, company dancer Carolina Czechowska moved slowly, almost imperceptibly, into a poignant isolation upstage, away from the people and the lights.

The featured dancers all looked terrific, especially in the adagios, their composure pointing up the beauties of their sustained arabesques and port de bras. They included Vivian Aragon, vivacious as the swiftly somersaulting center point of an ensemble dance; Dudley Flores, Michael Galloway, Jackie McConnell, and Tegan Schwab.