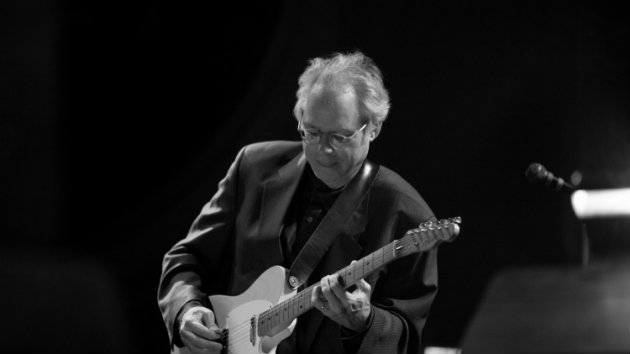 I came upon Bill Frisell more than 15 years ago, when I was still a teenager; the minimalist, slightly Rothko-esque cover of his second ECM release, In Line, beckoned to me from the “Guitar” bin of some Borders, Tower, or similarly defunct record store. As a young guitarist I was immediately smitten by his ethereal tone; his careful, always vocal phrasing; his effectiveness as a soloist without the need to rely on a gazillion notes.

It’s been a challenge to keep up with Frisell, whose music  encompasses the near totality of American vernacular and experimental styles, from his early work as a guitarist for John Zorn’s Spillane and Godard, to the recent reimagining of 50s and 60s rock and surf hits on Guitar in the Space Age.

Yet no matter the idiom or genre, Frisell's personality always shines through, his sapient fingers acting as the perfect filter through which to shine new light on disparate corner of the repertoire. His Friday, September 18, solo concert at Grace Cathedral — an appropriately reverberant setting — was practically a master class in idiomatic fluency and improvisatory prowess, a wonderfully quasi-private opportunity to sneak a peek into the arranger’s and guitarist’s mind. With nowhere to hide, and no-one with whom to collaborate, all we got was pure, unadulterated Frisell: And what a treat it was.

The guitarist spent the first half of the concert on a slope-shouldered acoustic guitar, gently amplified to trigger the sanctuary’s resonances without being completely overwhelmed. Moving seamlessly from original frameworks to more-or-less recognizable arrangements of jazz, bossa nova, pop, and folk tunes, Frisell also demonstrated absolute command of the steel-stringed instrument, employing a wide range of timbral variations, and juggling two independent voices with remarkable clarity in his typically linear, melodic style of playing. The hall itself became an extension of the instrument, supplanting the artificial reverbs often used in the studio while still allowing high notes to sustain well beyond the capability of the instrument. Rather than producing busy arrangements that account for every bass note and every rhythmic nuance, he manages to conjure the essential quality of the tune

From rhythmic, harmonic, and textural standpoints, Frisell is a master of the implied. Rather than producing busy arrangements that account for every bass note and every rhythmic nuance, he manages to conjure the essential quality of the tune, as in the unexpected cover of Teddy Randazzo’s “Going Out of My Head” (a number one hit for Little Anthony and the Imperials), while inhabiting a rhythmically suspended space, suggesting rather than providing those defining musical elements that eventually reveal the original tune.

After a half-dozen mesmerizing selections, performed nearly without speaking to the audience, Frisell switched to a Fender Telecaster guitar (a habitual companion), an assortment of effects pedals, and a pair of Fender Deluxe amplifiers. As expected, most of his electric set relied on the recording and overlaying of multiple loops of audio, often transposed up or down an octave, and by the electronic sustaining of drones “grabbed” from his own playing. These techniques are more or less commonplace in the experimental guitar world, but it was nevertheless illuminating to witness how smoothly and unobtrusively he bent the technology to his musical vision in a live setting.

The electronics allowed him to move from one selection to the next even more smoothly than in the acoustic set; thus “Shenandoah” morphed into “Wildwood Flower,” which sounded appropriately mandolin-like through the real-time deployment of a capo to bring the guitar’s pitch up an octave.

As the looped strains of the Carter Family tune faded into the background, Frisell switched on a searing fuzz pedal to let loose in a convincing bagpipe impersonation in his own Lake Superior. Even at the higher amplitudes of the electric set, Grace Cathedral provided a perfect canvas for the guitarist’s palette: Throughout, an original composition from the very record that introduced me to Frisell many years ago, sounded absolutely transcendent in the space.

An obligatory foray into Lennon-McCartney territory (“In My Life”), replete with faithful faux-harpsichord solo, signaled the end of the evening, but the public was not content. After re-embracing the acoustic guitar, Frisell broke his silence for maybe the second time to thank the audience, before letting the strings bid us all farewell with “Happy Trails” (of Dale Evans/Roy Rogers fame), the Chantay’s Pipeline, and a hint of the theme song to Bonanza.

Who said you need words to show a sense of humor?