The winds of new music filled the calendar and then some for the day-long Hot Air Music Festival at the San Francisco Conservatory of Music. By the time I arrived for a late afternoon/early evening visit, performances were beginning a half hour to an hour late. No one seemed to mind.

Indeed, it was a kind of affirmation of this 5-year-old festival’s burgeoning abundance. The ambitiously full schedule couldn’t contain all the music on tap without spilling over. Attendance for the admission-free concerts was good, and the buzz in the lobby area lively. A number of young children joined the crowd, old and young alike experiencing the unrivaled charge of new music heard live. 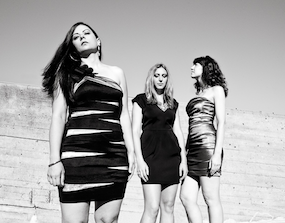 Performers during the day included the Guerilla Composers Collective, the International Low Brass Trio, the Mobius Trio (of guitars), two string quartets (the Telegraph and the Friction), assorted duos, and a dance performance choreographed by Dana Lawton. There were works by Philip Glass, Eliot Carter, and Witold Lutoslawski on the bill; and much more from less familiar names, many with connections to the Conservatory. Three different halls were in use.

The programmatic richness of all this Hot Air was apparent in a beguiling and arresting program I caught in the Salon. It began with an earthy and allusive performance by the Aeron Flutes in the Osher Salon.

Working barefoot, Kassey Plaha, Jill Heinke, and Sasha Launer bought a tactile sense of felt life to a pair of pieces evoking insects. First up, in Elainie Lillios’ haiku-based Summer Sketches, came water striders Skating on Discs of Light. Soft trills, tongue flutters and skittering fragments of melody brought the light-footed creatures vividly to mind. When the melodic lines conformed, here and there, it was as if the bugs’ tiny legs were busily working together. Then, with some blurry hesitation, the striders reached a fragile rest on the water’s surface. The cicadas in Dry Wind came alive as the players huffed and panted into their instruments to create an uncannily vivid scraping sound. A piccolo pitched in. Fingers chattered on the keys. A hypnotizing rhythm took hold, then speeded up, like a hurrying cicada invasion.

Cornelius Boots’ Chthonic Flute Suite, we were told, was based on a Tony Hillerman book and involved an elaborate backstory about a descent into the underworld. You didn’t need to know any of that to fall under the spell of this dramatic piece, which began with a mournful bass flute solo and roamed outward from there. By turns expansive and taut, lyrical and alien (the raw, wind-blown sound achieved by blowing into the wrong end of the flute at one point), the Suite was both colorful and carefully organized. Material was reworked into strophic repetitions, chanting chords, and folk-like elements. An especially lovely passage of harmonic lushness bloomed late in the third movement. The performances were committed and convincing throughout.

If I’d heard nothing besides Ian Dicke’s harrowing Unmanned, powerfully performed by the Friction Quartet, my Hot Air sampler would have been memorable. In this anguished response to the use of killer drones, Dicke cycles the live performance through step-sequence software that creates unpredictable echo and opposition effects. It’s as if the players never quite know when and how more dreadful forces will arrive. 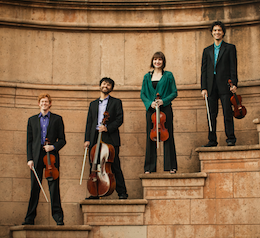 Violinists Kevin Rogers and Otis Harriel, violist Taija Warbelow, and cellist Doug Machiz gave everything from lyrical plunges to keening wails to snapping pizzicati an unnerving urgency. It was terribly beautiful, dreadfully jaunty, and finally implosive. One by one, the players abandoned their chairs and retreated to the audience, as the final software-geenrated lines swooped, decayed, and disappeared. A silent shiver ran through the house before the applause.

The Radiohead selection that followed, driven by a percussive ground bass by arranger and cellist Machiz, was fine. But even at its propulsive best, National Anthem — How to Disappear Completely couldn’t compete with the sonic after-images of Unmanned.

The tardy timing of events allowed me to catch Ada Gentile’s enticingly titled A Day in the Life of a Hysterical Soprano in the Recital Hall. Soprano Amy Foote and her much abused pianist Anthony Porter gave it their all, with the obsessive singer haranguing herself to “practice, practice, practice” while pianist “Bobby” tried to get a little Puccini and Mozart going. Complete with the melodramatic tearing of a Maria Callas head shot, this Day came off as a minor bad-dream gloss on the Broadway play Master Class.

Paul Lansky’s Partita: Suite for Guitar and Percussion, performed by John Zientek and Elizabeth Hall, brought my Hot Air excursion to a bland and mild-mannered close. In a way the soft landing felt right. There’s no way that everything in a new music festival — any festival, for that matter — will fly. The aim is to set as many balloons aloft as possible and see what takes off.