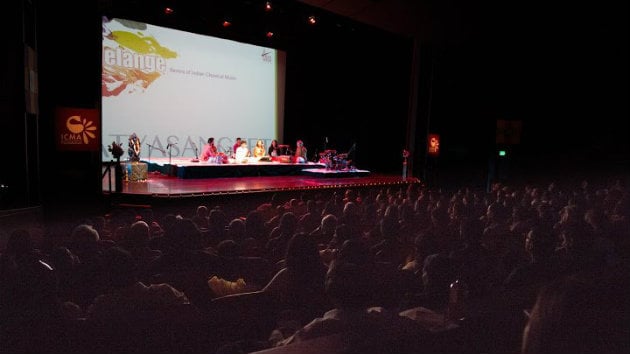 Cowell Theater, at the extremity of Pier 2 in San Francisco’s Fort Mason, was the embarkation point on Oct. 3 for “Melange … by the Bay,” a brisk tour through the history of East Indian Classical Music. The trip proved more exotic, yet more varied and accessible, than a visitor might have assumed.

The many attending, most of whom were arrayed in their traditional long and deliciously decorated garments from the subcontinent, were welcomed into the theater lobby by an exhibit of artwork and a pair of youth dabbing wrists with rose perfume. They were then presented a colorful and informative booklet designed by Shekhar Hemnani and Purva Gujar-Kale, the latter the wife of Mahesh Kale (pronounced, ‘Kah-leh’), founder of the Indian Classical Music and Arts foundation (ICMA) and the event’s lead vocalist.

Preceding the Dadra, and at several other points in the program, projected videos provided further insight into the musical forms from veteran musicians and scholars. This section featured Radhika Iyer playing violin in the shiny, sensuous style associated with India, though she later revealed hers to be a customized seven-string instrument made by symphonic rock musician Mark Wood and tuned to a Western rather than to a raga scale. The tabla percolated prettily in front of a projected image of a loving couple.

Kale had insisted on including the “equally rich and alive” Carnatic music of South India alongside the more widely disseminated music of the North, but the program booklet had been printed before this section was secured, so no title was announced. V. Selvaganesh came on to play the South Indian kanjeera frame drum. Beginning with a spirited exchange between Kale and Iyer, the syncopated melody went on to “swing” a bit more than the earlier sections, with both Iyer and the energetic Selvaganesh in playful mode.

Bhave and Kale spoke briefly about the charitable mission of the ICMA in educating disadvantaged children and raising relief money for victims of the Nepali earthquake Kale also praised the organization’s Youth Squad, which recently performed the Indian and U.S. national anthems for visiting prime minister Narendra Modi. ICMA is itself assembling a digitized library of Indian music, which will be accessible on YouTube.

In the opening of the second half, Kale was joined by students from the Mahesh Kale School of Music, who formed a chorus across the back of the stage.

Accompanying the performance of the Abhang section were images of a long, massed religious procession towards a temple, and the folksy spirit of the depiction was enacted onstage by a joyful give-and-take between Kale and the chorus, several of whom rang small bells. Kale’s ecstatically sustained thirds and fifths soared over the rhythmic clapping of the audience, which also was moved to a standing ovation.

The presentation of Qawwali inevitably involved images of the late Pakistani singer Nusrat Fateh Ali Khan, who’d spread this thrilling, surging form around the world before his untimely death in 1997. Qawwali might strike Western youth as something like in-your-face hip-hop, even without translation. In the middle of this section, Kale took the mic to advise, “I know this is a ‘classical’ concert, but you can shake a leg if you want to; get up, get up!” Many did, and they weren’t all youth.

For the Bhairavi, the last scheduled section of the program, Kale introduced “Indo-jazz sax player” George Brooks and sarodist Alam Khan, son of the late Ali Akbar Khan, about whom Kale said, “I worshiped your father’s music.” Sharing with Ravi Shankar the mission of bringing classical Indian music to the West in the 1950s, the elder Khan founded the Ali Akbar College of Music in San Rafael, where the younger Khan is now office manager and teacher. Selvaganesh returned to the stage behind a small, uniquely arrayed drum-and-percussion set, from which he also led the audience in bol, a mesmerizing vocalization of rapid and complex rhythms, with, Brooks improvising pungently in a manner evoking Stan Getz, and Khan displaying his instrument’s range of timbre and impelling articulation.

An anthemic musical prayer for the world sent the audience back out into it, cooled by the breeze off the Bay but warmed by the experience of shared celebration.