There are recitals, there are great recitals, and then there’s Yuja Wang. In an extraordinary scene Sunday in Herbst Theatre, after hearing her play the audience appeared both exhausted and elated. My hands hurt not merely from applauding, but also from an apparent case of couvade syndrome (men’s sympathy pain at childbirth) on listening to two hours of devilishly difficult Scriabin and Prokofiev played with ease and clarity. 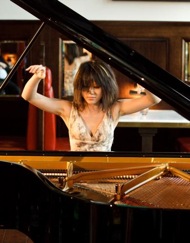 boost at the beginning of the Chinese teenager's career) that Yuja's full tone in her right-hand melodic material is now really close to that of the Maestra herself.

Argerich and even Horowitz come to mind witnessing Yuja lighting-fast and yet effortless passage work. Her smooth, almost imperceptible change of dynamics within a measure, and the freedom of the left hand in treating melodies are stupefying

Said the fellow Argerich (and now Yuja) fan: "I normally stay away from piano concerts because the majority play everything as if every note should have the same level of intensity. I don't know why that's trained into so many pianists. Yuja is very different: her shaded dynamic readings are wonderful."

So, what did she do after the ovation following her program? She sat down and gave a couple of encores: Chopin (Waltz in C-sharp Minor) and Scarlatti (Sonata in G Major, K. 455), both played exquisitely. It was truly a concert to treasure. So why am I worried?

Writing this report on Father’s Day, I may be excused for the paternal tone. It’s just that I’m concerned 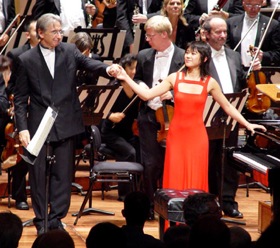 about this finest, most musical/artistic pianist prodigy around.

Check the definition of “prodigy”: “an unusually gifted or intelligent (young) person; someone whose talents excite wonder and admiration.” That’s Yuja (who prefers to be known as such) to a tee. I’ve been following her career since she won the Aspen Music Festival’s concerto competition in 2002, at age 15. Four years later I was at her virtually unnoticed local debut at the San Francisco Symphony’s Chinese New Year concert in Davies Symphony Hall.

In the past three years or so, Yuja has exploded on the global musical scene, with some hundred concerts and recitals annually, two acclaimed CDs, fame, fortune ... plus a sore arm, which forced her to postpone from April the San Francisco Performances recital we heard Sunday.

In the three days before the recital, Yuja performed as many concert pieces each night with the San Francisco Symphony, instead of the usual single concerto:

The Sunday program, also performed in many other venues, consisted of:

... plus the Schumann, the Schubert/Liszt, and the Prokofiev of Sunday’s program Otherwise, the Prokofiev Concerto No. 3 — June 9, 11, 26, 29 ... and more. On the face of it, is this not “too much”? And, to return to the headline: a good thing? From the audience’s point of view, it’s not enough, and “good” is far too lame to describe it. But what about the future of a wisp of a 23-year-old? In all this excessive Chinese diligence, with a tinge of Japanese karoshi (salarymen’s death from overwork), there looms the danger of the physical toll, along with overexposure and possible burnout.

None of these shows yet (the doctor-ordered rest was just for a few days), and the only actual sign of overwork came in the Symphony concerts, where she used a score with each piece. I’ve never seen her do that before, and the obvious reason is lack of preparation time. 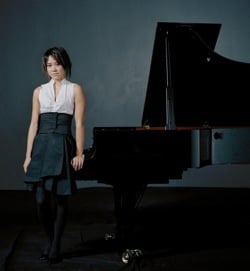 But the indisputable fact is that you couldn’t hear that in the performance, which was bothered only by the distracting visuals of, for example, turning pages with the free right hand during the Ravel. Was she herself distracted? Not at all. The Ravel was big and bold; the Poulenc (in which she took the lead hand over the excellently performing Michael Tilson Thomas) surprising, clever, amusing; the Stravinsky brilliant.

The latter work, jagged and heavily syncopated — familiar to many from George Balanchine’s use of the music in the “Rubies” section of the ballet Jewels — was overwhelming, with Stravinsky-specialist MTT and the orchestra coming along for the ride. (More Stravinsky-MTT fun came in the concert’s non-Yuja portion, with a riotous, ominous, scary-good Le Sacre du printemps.)

Many great singers (and a few beyond great, such as Thomas Quasthoff) interpret these songs memorably, but few pianists can embrace and play their essence as well as Yuja. "Gretchen am Spinnrade" (Gretchen at the spinning wheel) begins with music that evokes the motion of the machine, the voice blending into that sound with “My peace is gone. ...” In Yuja’s performance was heard a distinct, though inseparable, duet between the wheel and the singer.

Fused, too, were all the sounds of "Auf dem Wasser zu singen" (Singing on the water), in which the voice and all the song describes:

In the midst of the shimmer of reflecting waves
The bouncing rowboat glides like swans
Ah, over the gentlyshimmering waves of joy
Glides the soul like the rowboat.

And then came "Der Erlkönig" (The Erl king), the great micro-opera about a terrifying flight from death through a dark forest. Frequently overdone, the song was heard here in an exact and moving interpretation of an exceptional pianist-musician, performed with precision, deep feeling, and terrific impact.

My favorite performance at the recital, before the mighty virtuoso pieces — breaking through the density of Scriabin, the huge wall of sound at the climax of the Prokofiev sonata, and the letter-perfect Schumann — was Yuja’s “singing” of the Liszt transcriptions of Schubert lieder, which provided a clear demonstration of what separates her from mere pianist superstars. Rather than tackling the instrument, Yuja makes it disappear, leaving the music to permeate the hall seemingly on its own.