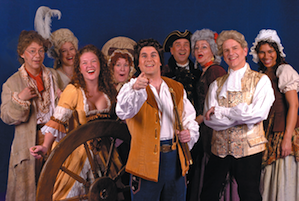 William S. Gilbert and Arthur Sullivan always traversed those genres, and some more. The safest description is that these buoyant, sparkling theater pieces are "G&S."

And yet, if you want to push the claim to describe a work as opera, The Gondoliers, from 1889, is close. Written after a trip to Italy, it reverberates with Donizetti's melodies, Rossini's madcap rhythms — inspired by great Italians, yet never copying them.

The Gondoliers, or, The King of Barataria, even has some Italian lyrics, and fittingly, the Lamplighters' precurtain announcement about cell phones, forbidden recording, and emergency exits was made in Italian, assuming correctly that it could be made in any language as long as those terms are enumerated understandably. "Nel mezzo del cammin di nostra cell phones ..." will be ignored just as surely as the traditional version is.

The delightfully silly plot about Venetian gondoliers, a future king mixed up at birth, multiple love affairs, and a happy ending easily anticipated from the beginning are all carried on the wings of captivating music.

When Amy Foote sings "Kind sire, you cannot have the heart," you hear musical phrases worthy of Puccini. The Duke of Plaza-Toro (John Brown), the Duchess (Sonia Gariaeff), daughter Casilda (Elise Marie Kennedy,) and the deceptively meek-looking royal drummer (Michael Desnoyers) introduce themselves in "From the sunny Spanish shore," in what is a tarantella-on-steroids, that will keep buzzing in the listeners' heads long after the curtain falls. 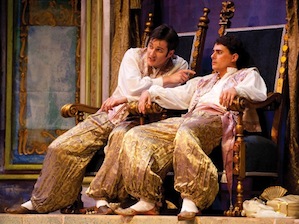 Percussionists everywhere will treasure the reference of the Grand Inquisitor (Charles Martin) to Desnoyers' small drum as "a delicately modulated instrument."

The company's veteran music director, Baker Peeples, gets maximum value from his fine pickup orchestra; Pamela Carey is concertmaster. The overture was splendid.

Director Barbara Heroux keeps the action popping, helped by Jayne Zaban's choreography. Peter Crompton's set is a reasonable representation of the Queen of the Adriatic; Jenica Lancy's costumes belong with a big-budget company (nota bene: a category beyond the Lamplighters' means).

One puzzle, for me, at least, is Queen Victoria's fondness for the work, which was given at Windsor Castle in a royal command performance. Without supertitles, thoughtfully provided here by the Lamplighters, the Grandmother of Europe might have missed all that republican (pre-GOP) rabble-rousing:

"... we hold all men to be equal. As we abhor oppression, we abhor kings: as we detest vain-glory, we detest rank: as we despise effeminacy, we despise wealth ..."

Abhor, detest, despise may be too strong, but at the very least, I'll say it's highly objectionable that Novellus Theater now permits and even encourages — with notices posted around — food and drink in the theater during performances. Apparently, any food, any drink. If the decision was made by the captain of the Yerba Buena Center, I'd say to him: "Torna a bordo, cazzo!"