Many enthusiastic Gilbert & Sullivan fans, including this one, are not familiar with The Yeomen of the Guard. It's just not part of the Mikado-Pinafore-Penzance hit parade.

And yet, when you finally get to this atypical, unusual G&S work from 1888, there are great rewards to be found, including some of Arthur Sullivan's best music and William S. Gilbert's most clever lyrics. 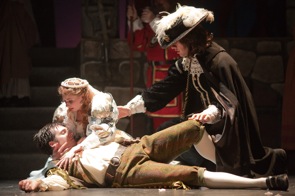 The best way to become Yeomen-knowledgeable is to attend the Lamplighters' production this weekend at Yerba Buena Center, or Feb. 19-20 at Livermore's Bankhead Theater.

Lamplighters Music Director Baker Peeples and Artistic Director Barbara Heroux, in charge of the current productions and distinguished veterans of the G&S canon, both name Yeomen as one of their favorites. Phil Lowery is production designer and stage manager.

Showering lavish attention on the work, Peeples calls its "particular combination of romance, humor, and pathos exhilarating." Heroux speaks of its "wonderful characters — real people who do things that are sometimes smart, sometimes dumb, sometimes funny, and sometimes tragic. We really come to care about these people and what happens to them."

Yeomen are members of the ceremonial bodyguard of the British monarch. The opera is set in the Tower of London in Shakespearean times, although Lamplighters moved it up almost a century, to the 1640s. (More about that later.)

The plot is unchanged: Colonel Fairfax, an admirable gentleman-soldier and scientist, is sentenced to be beheaded on a false charge of sorcery. To avoid leaving his estate to his cousin, who brought the accusation, Fairfax secretly marries Elsie, a "wand'ring minstrel she," promised to become a rich window instantly:

"There never was a marriage fraught with so little of evil to the contracting parties," muses Fairfax. "In an hour she'll be a widow, and I a bachelor again for aught I know."

When Fairfax escapes, masquerading as a Yeoman, all is thrown into confusion, and subsequent romantic pairings and pursuits provide a dizzying plot. Unlike in a "typical G&S," there is no happy ending for everyone, and there are some fairly dark thoughts spoken and sung about life and death, the ups and downs of marriage. 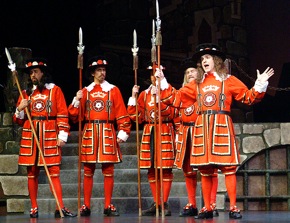 The music is fascinating: less bouncy than usual, more symphonic, with a broad sweep, leaning toward opera rather than operetta or musical. Some of the arias — especially "'Tis done! I am a bride!" — sound a bit like Donizetti; ensembles and chorus occasionally resemble Rossini, but not his act-ending whirls of comic operas.

The small Lamplighters Orchestra (conducted by Peeples, with Pamela Carey as concertmaster) provides an impressive performance. Of the Overture, Peeples has said, with justification, that "This is one of only two, along with Iolanthe, that Sullivan really spent time and energy on. Sometimes the themes, based on melodies from the opera, are so transformed they're hard to recognize! An amazing piece!"

The production is double cast. This report is from the Friday evening performance where the most impressive singer was Amy M. Foote, making her company debut as Elsie, the character who stumbles onto the marriage of inconvenience mentioned above.

While the amplification in Yerba Buena occasionally turns choral numbers into mush, Foote and some of the other cast members managed to sound both "natural" (unamplified) and good. Foote's accuracy, musicality, and diction were impressive — she is helped by getting some of the best numbers. Beginning with her introductory duet (with Chris Uzelac's Jack Point), "I have a song to sing," she was consistently excellent all the way through.

The Elsie of the other cast is Jennifer Ashworth, a favorite Lamplighter, so you will be in good hands either way.

Two speaking voices, those of Robby Stafford as Sergeant Meryll, and Behrend Eilers as Wilfred Shadbolt (Head Jailer and Assistant Tormentor, who dislikes "head-jailing and assistant-tormenting") are a joy to hear. They sing too, but it's their acting performances that demand notice.

Michelle Schroeder is the hardworking, ever-bouncy Phoebe, the Sergeant's daughter, enamored of Colonel Fairfax (Michael Imbimbo); William O'Neill is Sir Richard, with a booming voice. Dan Gilpin, Kathryn Schumacher, and Sarita Cannon round out the cast.

Notwithstanding amplification — or perhaps because of it — both the small men's chorus and the full chorus of the townspeople performed in a fair-to-middling fashion.

Now, about the change from Shakespearean times up a whole century to the mid-1600s. The program makes a good case for getting away from the G&S parallel of stability between the reigns of Queen Elizabeth I and Queen Victoria, and going instead to a time of political turmoil eventually leading to the beheading of Charles I:

"It works well for this story full of plots and lies and intrigue to set it in a time when everybody was looking over their shoulder, afraid to speak openly, not knowing who might be listening or what side they might be on."

True, except for the fact that you wouldn't know about this thoughtful time shift unless you read the program: It just doesn't make a difference in the story. Where it does come in handy is allowing historically accurate use of what Heroux calls "the men's really attractive Cyrano/Three Musketeers look." And there, credit goes to custome designers John C. Gilkerson and Melissa Wortman, with the assistance of costumer Emilica Sun Beahm. That's Sun Beahm, in case you missed it.